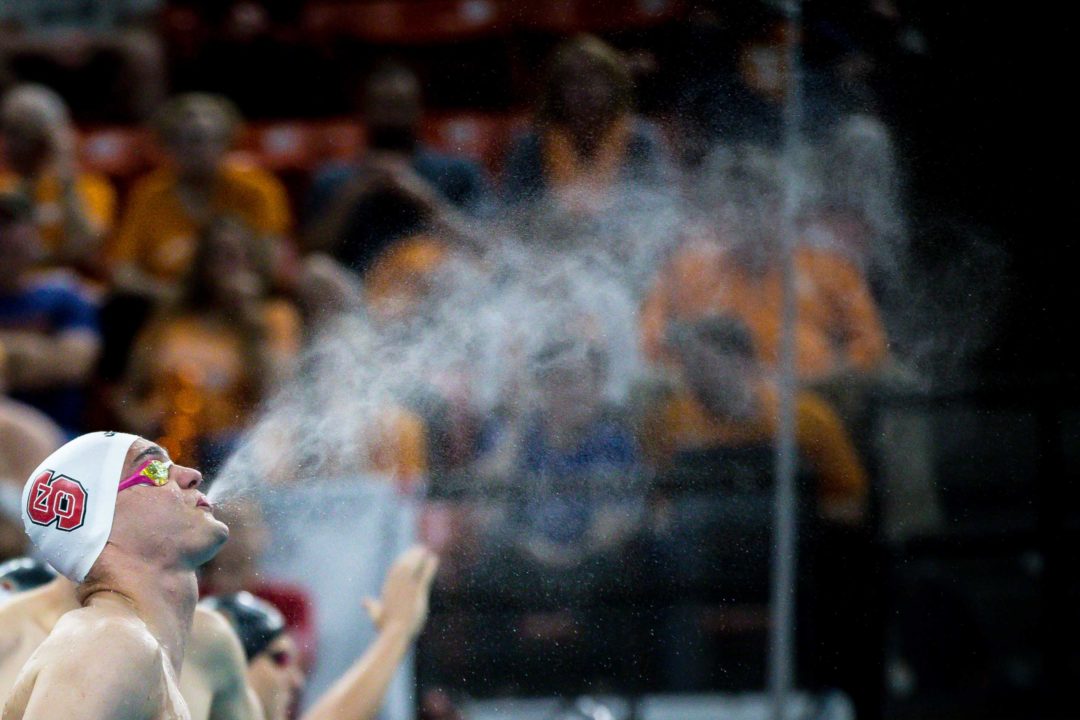 NC State's Nyls Korstanje is competing in his native Netherlands this week, tearing up his personal bests through just one event. Archive photo via Jack Spitser/Spitser Photography

28-year-old Thom de Boer already made history on day 1 of the Rotterdam Qualification Meet in the Netherlands, establishing a new national record in the men’s 50m free. Hitting a time of 21.74, de Boer nailed a huge lifetime best, getting under the 22-second mark for the first time in his career.

Come tonight’s final, the Olympic qualifier came as close as one can to hitting the same mark, posting a winning effort of 21.75 to seal the deal with the gold.

But, it turns out de Boer started a sub-22 trend, with Nyls Korstanje also getting the feat accomplished for the first time in his career tonight.

Entering this meet, NC State’s Korstanje owned a lifetime best of 22.04, a mark he produced just last month. However, taking de Boer’s lead, 21-year-old Korstanje found a way to shave off some hundredths to post a new personal best of 21.98.

In doing so, Korstanje became just the 3rd Dutchman ever to get under the 22-second barrier in the LCM 50 free event, joining de Boer and the former national record holder Jesse Puts, who set the former record at 21.82 in 2016.

As for Korstanje, his personal achievement is bittersweet as it is not enough to qualify him in the event for the Tokyo Olympic Games. Although his individual time beats the FINA ‘A’ time of 22.01, he’s the 3rd man out as Puts had already qualified via his semifinal performance at the 2019 World Championships. De Boer’s time rendered him as the 2nd swimmer up for Olympic roster consideration in the event.

Doesn’t qualification continue for the Netherlands until May or sometime next year? Or is this the last chance qualifying meet?

It continues only for distances in which zero or one athleet has qualified. If after RQM the two spots are filled, there is no chance to qualify anymore. So if none of the swimmers meet the limit the NOC-NSF set for the 100 meter butterfly men for example, the swimmers have a chance again in April to get that spot 🙂
Nyls sadly enough didn’t make the Dutch time limit for the olympics, the Dutch olympic comitee (NOC-NSF) has his own limits next to the FINA ones, and for the 50 free it was 21.91

Thanks. Wow. Third in the country and already shut out this far in advance. It’s almost better to be third because to be second and under the ‘A’ time and still not invited would hurt even more. Sending good wishes for the 100 and the fly!!

yeah, its stupid. Korstanje is faster than Puts, but Puts gets to go.

Puts actually swam 21.92 about a month ago, at a special meet organized for the Amsterdam National Training Center swimmers. So he’s still ranked second in the Netherlands, even when you only consider recent results.

Not stupid, he knew what the time to beat is. It’s the same qualifying procedure in NL for years. Beat the time limit (he didn’t succeed), and be within the fastest two. All to be done on certain competition. Be aware that Puts was the only reached the time limi of 21.91 and supposedly should have participated last summer.

Hereby all the time standards athletes have to reach to make nomination for the Olympics:
https://www.zwemkroniek.com/nieuws/6675/RQM_(7):_Zwemtop_in_de_slag_met_pittige_prestatie-eisen_Tokio_2021/