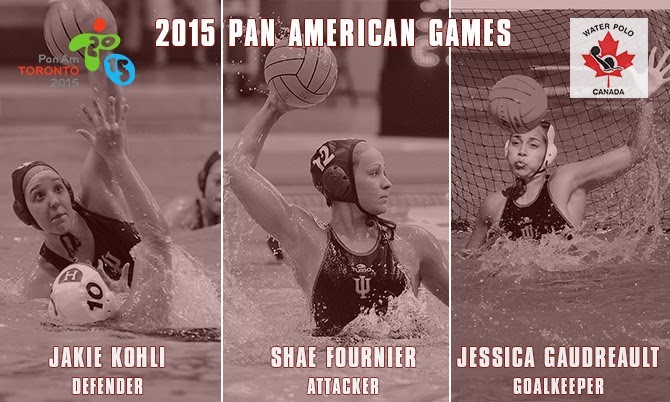 “We are very proud of Shae, Jess, and Jakie’s contributions to the Canadian National Team’s preparations for Rio 2016,” said Indiana water polo head coach Barry King. “The fact that Indiana University is responsible for almost a quarter of the roster confirms the quality experience a student athlete can and will have here. We look forward to following their individual and team progress.”

Most recently, Fournier, Köhli, and Gaudreault took part in Canada’s FINA World League Intercontinental Tournament in Auckland, New Zealand. The Canadians went 2-1 in the group stage to set up a promising run in the crossover. Canada fell in their semifinal match against top-ranked United States, but earned the bronze medal with a come-from-behind win against No. 2 China on the tournament’s final day.

Canada has won medals in women’s water polo at every edition of the Pan Am Games since capturing gold in the event’s debut at Winnipeg 1999. The Canadian Senior Women’s Water Polo Team earned silver in its last Pan Am Games appearance at Guadalajara 2011, after narrowly losing to the USA, 27-26, in the fifth round of the shootouts.

“I am really thrilled and honored to have been selected to play in these Pan American Games in Toronto,” said Canadian utility player Christine Robinson. “With this tournament set right here at home in Canada, our team gets to proudly play in front of families and friends who have supported us for so long. This will be exciting for us and for our sport.”

Shae Fournier (2011-2014) is one of the most decorated players in Indiana Water Polo history. She holds the top two school records for single-season goals (95 in 2014, 83 in 2013) and career goals (305), and is second in IU history in career steals (311). Fournier was the 2014 CWPA Player of the Year, and earned second team All-American and first-team Academic All-American honors. Fournier is one of five players in NCAA history to score 300 or more goals in her career.

Jacqueline “Jakie” Köhli (2008-2013) is another Hoosier who stuffed IU’s record books. Köhli ranks third and seventh all-time in single-season goals (80 in 2010, 71 in 2011), and sixth all-time in season steals (89, 2011). Köhli posted strong numbers throughout her tenure at IU, and finished her career third in career goals (244), fifth in career assists (134), and third in career steals (276). Her accolades include a 2011 All-America Honorable Mention selection, NCAA Championship All-Tournament Second Team honors in 2012, and a 2011 All-CWPA Second Team selection.

Jessica Gaudreault (2013-2014) had two outstanding seasons for the Hoosiers, earning CWPA All-Conference First Team honors in her freshman and sophomore seasons. Gaudreault ranks sixth in IU history in both single-season saves (245 in 2014) and career saves (444).

Gaudreault joined Köhli and Fournier on the Canadian Women’s National Team following her sophomore season. She will remain with the Canadian squad through 2015 and 2016 in hopes of grabbing a slot on Canada’s 2016 Olympic games roster. Gaudreault recently competed for Canada in 2015 at the FINA World League Intercontinental Tournament in New Zealand, where she helped her side win the bronze medal. She plans to return to Indiana following the 2016 Summer Olympics.