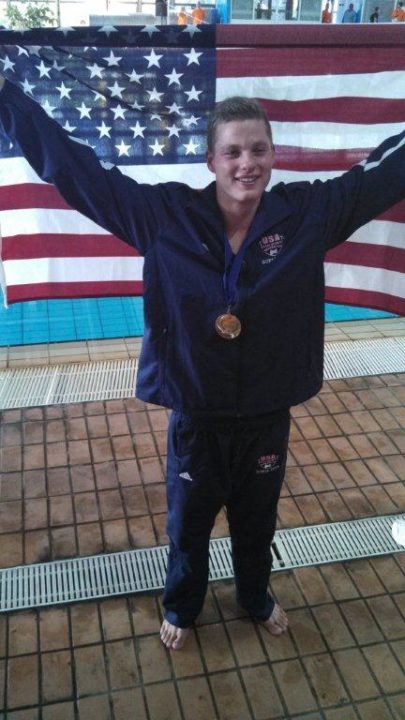 Matthew Klotz of the Sierra Marlins in California won the Americans’ first swimming gold medal at the 2013 Deaflympics in Sofia, Bulgaria on Sunday, and in the process broke the 100 meter backstroke World Record for the 2nd time in this meet.

Then, in finals, he was a 58.69, crushing his own record, and claiming gold ahead of Japan’s Yushikazu Kanaji (who was a very strong 59.73).

Not only did Klotz win and set a World Record, but looking at his bigger picture, he drastically increased his recruiting value with that swim as he heads into his senior season. He cut almost two seconds off of his best time at this meet, and went his first Summer Junior National cut, which is a huge cut-line for many of the country’s top college programs.

Klotz wound up scratching the semi-finals of the 50 free to focus on this 100 backstroke.

In other finals on day 2 of this meet, China’s Yue Yue He won her second race with a 5:04.07 in the women’s 400 IM. 16-year old American Catherine Parker dropped 6 seconds from prelims to move into 7th place in the final.

The Americans just missed putting up their second relay medal of the meet, placing 4th in the women’s 200 free in 9:15.99. That included a 2:11.65 lead-off from University of Hawaii swimmer Peggy Liang.

Russia’s Ilya Trishkin won the men’s 100 fly in 55.71, the best comparative swim of the day, followed closely by Jia Hui Xu in 55.88. Trishkin is far off of his Deaf World Record set at the 2009 Deaflympics, where he was under 54 seconds.

Matthew Klotz (center), posing here with his fellow medalists in the 100 backstroke.

That’s awesome! Amazing reaction off start! Is there a strobe light? Proud of that guy!

Josh – believe it or not, there’s just one strobe at each end of the pool. Conditions have been less than favorable as compared to what we have in the United States.