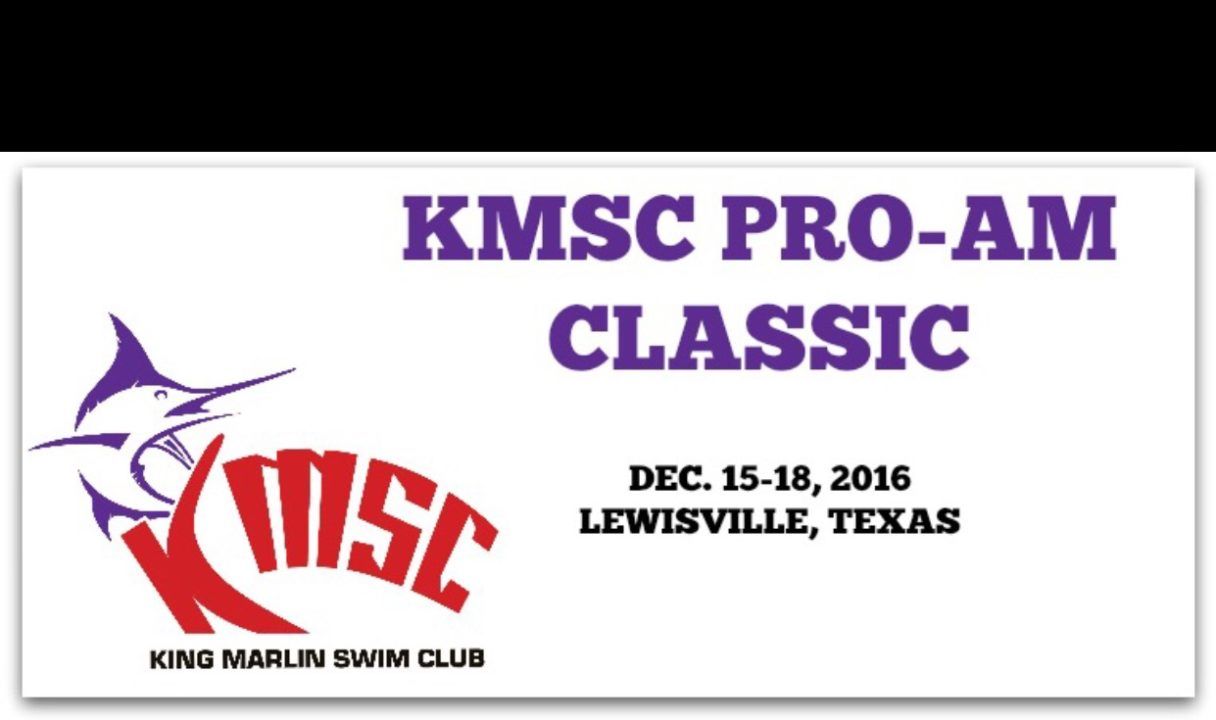 The King Marlin Pro-Am Classic is returning to Lewisville, Texas this year with their sights set on making the meet larger than ever. Current photo via King Marlin Swim Club

It has been 25 years since the first Elite Pro-Am was hosted in Oklahoma and it would have been hard to predict the success it has built since.  To give you some historical perspective, Tom Jager took second place in the 100 fly in Oklahoma City the first year this meet offered prize money, unable to hold off future (1996) Olympian John Hargis from Little Rock Racquet Club, who was still in high school at the time.

What began as an experiment with a lot of belief behind it, quickly became one of the premier short course meets in the country and is now a showcase for our unique ability in swimming to get world-class professionals sharing water with local amateurs.  With prize-money drawing many of America’s legends and rising stars alike, this meet has seen several American Records broken, and has drawn teams from all over the country together for some of the fastest swimming in the nation right before Christmas break.

The recent closing of the Oklahoma City Community College pool was a great loss for swimming in the mid-west, and presented a major challenge to the host teams… That’s right, I said TEAMS.  A contentious split between the Coach who dreamed up the concept, and the club that had always been associated with it, caused a parting of ways that left a lot of confusion over whether the pro-am would continue regardless of facility concerns.  That December, both American Energy Swim Club and Brown’s new club, King Marlin, insisted they claim rights to carry on the tradition of the meet and were determined to each host a pro-am, with AESC moving the 2015 meet to the the Mitch Park YMCA pool in Edmond, OK and Brown moving his version, re-titled the “Pro-Am Classic,” to the newly constructed Lewisville Westside ISD Aquatic Center in Lewisville, Texas.

Moving to the new location would allow Brown to split the prelims into two pools, making the meet run more smoothly than before.  Having always been known for their unique Oklahoma hospitality and their ability to run a quality, national-caliber competition, this was a natural evolution for King Marlin and they handled the change with flying colors.

The meet in Lewisville was a success, with several longtime attending teams like Mission Viejo and Schroeder Y choosing to stay loyal to Brown and the King Marlin crew.  Even in an Olympic year, several top athletes also chose to attend the short course yards competition, including Olympians Ashley Twichell, Ariana Vanderpool-Wallace, Katie Meili and Roland Schoemann.  After their 2015 run with the new facility and format, they have kept almost every detail of the meet the same this year, including the popular 50 freestyle shoot-out, but are now expanding the maximum competitor limit to 950 athletes.

King Marlin Head Coach John Brown told SwimSwam: “The 2015 King Marlin Pro-Am Classic was the most successful Pro-Am since I conceptualized this Pro-Am format in 1992.  Moving the meet to Lewisville, Texas helped us attract many Pro Athletes as well as a large number of the most talented College and High School swimmers from around the country.  We have been blessed to have the support of so many great coaches throughout the years.  The 2016 King Marlin Pro-Am Classic is shaping up to be an even better meet than last year!”