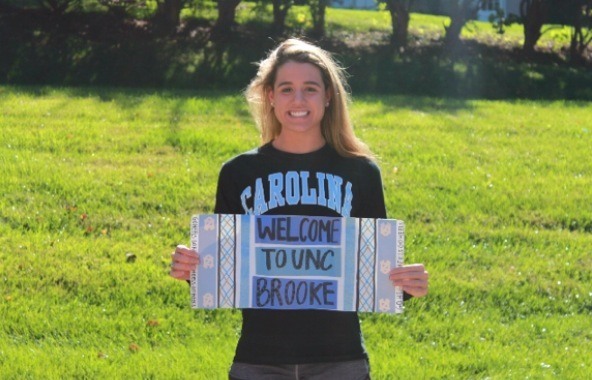 Bauer was the 2013-2014 Kentucky High School State Champion in the 50 and 100 yard freestyles for Sacred Heart High School when she was just a sophomore. In the process, she also broke the Kentucky State Record in the 50 free twice: once in prelims with a 23.37, and then in finals with a 23.14.

Her junior season was a little different. Even with a no-doubt team title for Sacred Heart, she swam three relays and only the 100 free individually. Bauer wound up placing 2nd in the 100 free (behind star freshman Sophie Skinner), and lost her 50 free State Record to Grace Oglesby without entering the race.

She was, however, a part of State Record breaking 200 medley and 200 free relays, validating her decision to focus on relays versus individual events.

Bauer is part of the best women’s class to graduate from Kentucky High School swimming in a generation. While most of the top names to have committed thus far (her high school and club teammate Asia Seidt, plus Oglesby and Madison Winstead) have stayed in state, Bauer escaped to the Tar Heels. That’s despite the additional lure of her mom, Cheri, having swum at the University of Kentucky.

“I chose this school because of the outstanding academics, exciting team atmosphere and great coaching staff,” Bauer said. “I’m honored to join the Tar Heel family.”

North Carolina has a very young, very talented sprint group, and so while Bauer won’t have a ton of pressure to immediately perform, she is an important part of continuing that momentum toward the next generation. UNC’s 2015 class included freshman sprinter Kate Boyer, whose 50 and 100 times are almost identical to Bauer’s, which should keep the light shining for the Tar Heels into the future.

wait what? she hasn’t even posted anything yet lol