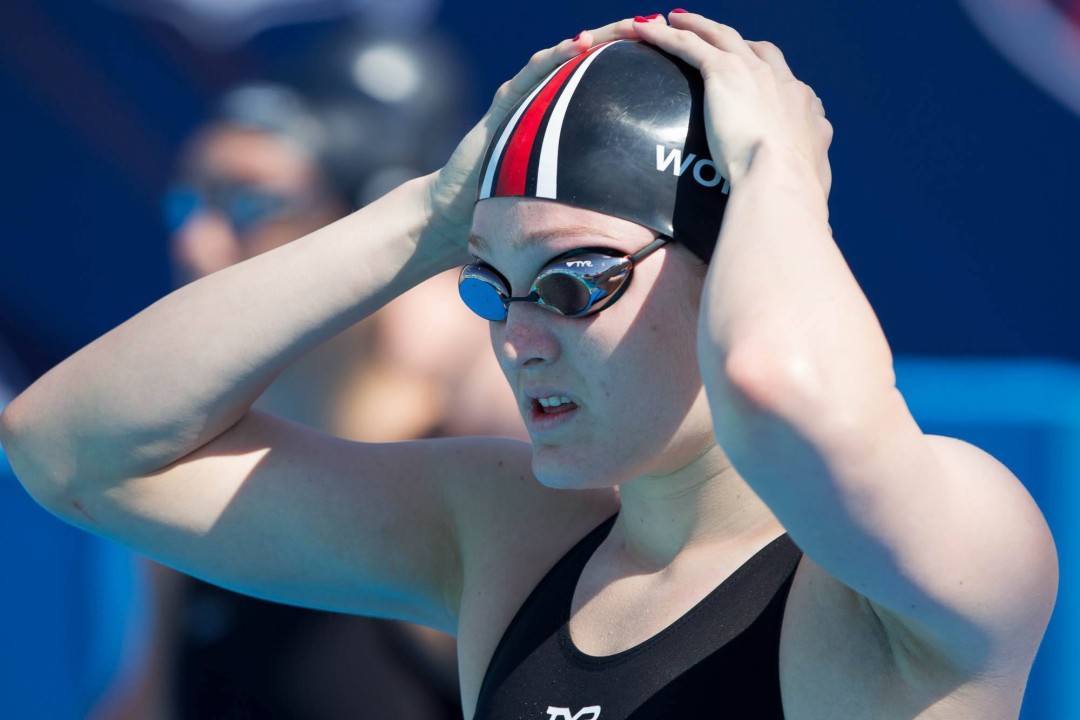 Kelsi Worrell who has been lighting it up at this meet with some very fast swims set herself up perfectly for another, taking the top seed in the 100 freestyle with a time of 48.86. The Louisville swimmer broke the pool record in the process with that time, and wasn't that far off her Louisville team record of 48.48. Archive photo via Tim Binning/TheSwimPictures.com

The Cardinals entered day three of the Louisville Cardinal Invitational with a lead in both the men’s and women’s categories, and put together a prelims session to suggest that that lead would be carried through towards the end of the meet.

Chris Pederson of Connecticut took the top spot in the women’s 200 yard backstroke with a 1:59.37. Louisville’s Erica Belcher took the second seed behind her with a time of 1:59.81. Taking the third spot was Andrea VanderMey in 1:59.83.

In the prelims of the men’s 200 backstroke Aaron Greene led the way with a very fast time of 1:44.18 making a NCAA ‘B’ time in the process. Paul Le of Missouri State grabbed the second spot heading into finals with a 1:47.20 ahead of Louisville’s Josh Quallen who put up a 1:47.97. Nolan Tesone of Louisville who has had a fantastic meet thus far grabbed the sixth seed with a time of 1:48.86.

Kelsi Worrell who has been lighting it up at this meet with some very fast swims set herself up perfectly for another, taking the top seed in the 100 freestyle with a time of 48.86. The Louisville swimmer broke the pool record in the process with that time, and wasn’t that far off her Louisville team record of 48.48. Michelle Craddock of Western Kentucky will be beside Worrell in the final grabbing the second seed in 50.01.

Uvis Kalnins of Missouri State rocked a 43.99 in the prelims of the men’s 100 freestyle ahead of Louisville senior Thomas Dahlia. Dahlia wasn’t far behind with a time of 44.36 to give him the second seed. The next three swimmers were also very close as Rudy Edelen of Louisville, Till Pallman of Southern Illinois, and Trevor Carroll of Louisville all finishing within 0.40 of Dahlia’s time.

The women’s 200 breaststroke paved way for what will be an extremely exciting final tonight as Claire Conlon took the top spot with a time of 2:16.54. Behind the Western Kentucky swimmer was Louisville’s Devon Bibault in 2:16.71. With the top three all within a second of each other, it should shape up into a very competitive race.

Like the women’s, the men’s 200 breaststroke will be close as well. Addison Bray of Louisville was the fastest in the morning dropping a 2:00.05, but had teammates Todd Owen and Dexter Thomas right on his heels as they swam times of 2:00.37 and 2:00.73 respectively. The top five seeds were all within two seconds of each other, the top three behind within one.

With amazing performances already displayed at this meet, Tanja Kylliainen set herself up beautifully for another win tonight as she swam a 1:56.42 in her 200 fly prelim to take the top spot by over three seconds. Devon Bibault, who will have the 200 breaststroke right beforehand, swam a 1:59.79 for the second seed. Louisville junior Kelsi Worrell will also be featured in the finals, grabbing the fifth seed in 2:00.75.

Joe Brown took the top slot in the men’s 200 fly with Matt wilson of Missouri State not far behind him. Brown was a 1:49.92 this morning with Wilson putting up a very competitive 1:50.34. Behind Wilson was Louisville’s Pedro Coutinho who was just slightly slower in 1:50.36. The top four were all within a second of each other as Michael Wolfe of Southern Illinois clocked in at 1:50.67 to take the fourth seed.

The women’s 1650 times final gave way to 32 points for Louisville freshman Marah Pugh. Pugh raced with teammate Abby Chin for the remainder of the race, however pulled away towards the end to win it in 16:33.56. Chin wasn’t far behind her in 16:37.75.

Missouri State’s Miguel Davila was the winner of the men’s 1650, separating himself from the rest of the field in order to sport a 15:18.66 and grab the win. Michael Wolfe of Southern Illinois was his closest competitor, touching in at 15:37.81 for the silver.

Alli Murhy picked up more points for Louisville on the platform diving event as she stormed to 234.45 points and a victory. Emily Stalmack, also of Louisville finished second behind her with 229.20 points. Third was Savannah Neddo of Western Kentucky who earned 219.85 points.

On the men’s platform Kegan Skelton of Southern Illinois was able to racket up the most points with a grand total of 336.25. Sean Piner of Louisville was second behind him with 320.20. John Brice of Connecticut was well behind the two leaders but managed to pick up a third place finish with 247.40 points.

Heading into the last day of finals, the Louisville men are untouchable with a 862.5 point lead. The women also have a sizable lead with 230 more points than Western Kentucky, however their victory is less solidified than the men’s.

She’s going to win something before her career is done.