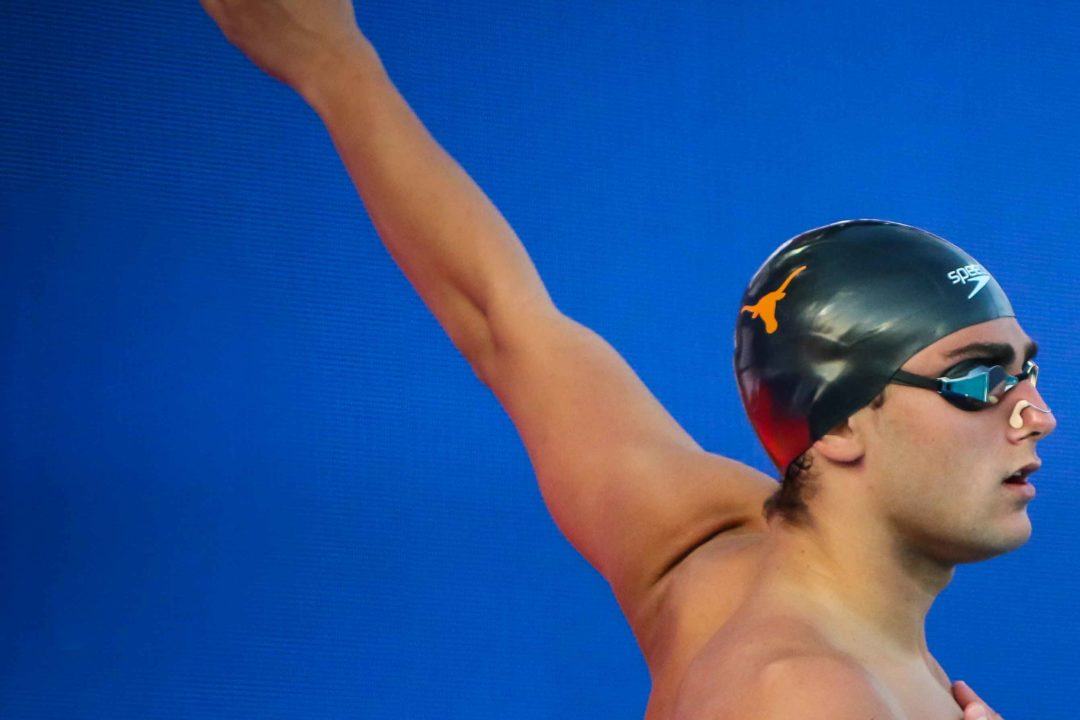 Reigning NCAA 200 back champ Austin Katz recorded his first 200 back win of the season with his 1:43.90. Archive photo via Jack Spitser/Spitser Photography

Tennessee will honor 17 student-athletes during a Senior Day ceremony before the meet at 11:45 a.m.

Following a victory over Auburn, the Texas Longhorns continued on their road trip with a meet against the Georgia Bulldogs in Athens on Saturday. The men’s team got a pair of wins from American Record holder Townley Haas and All-American Tate Jackson. Also of note, reigning NCAA 200 back champ Austin Katz recorded his first 200 back win of the season with his 1:43.90. He took it out in 50.99 and hammered home to dominate ahead of teammate Ryan Harty (1:46.21).

ATHENS, Ga. – The No. 2 University of Texas Men’s Swimming and Diving team downed No. 12 Georgia on the road, 162-133. The Longhorns secured their fourth-straight win over an SEC opponent this year.

Next Up
The Joe and Jamail Texas Swimming Center will host the Longhorn Long Course Invite from Jan. 17 – 19. The UT swimmers will be back in dual meet action to face Arizona and NC State in a double dual from Feb. 1 – 2.

ATHENS, Ga. – The No. 1 University of Texas Women’s Swimming and Diving team downed No. 11 Georgia on the road, 169-129. Head coach Carol Capitani earned her second victory over her coaching mentor, Jack Bauerle, after serving as an assistant coach for 14 seasons at UGA.

Next Up
The Joe and Jamail Texas Swimming Center will host the Longhorn Long Course Invite from Jan. 17 – 19. The Longhorns will be back in dual meet action to welcome in Arizona and NC State in a double dual from Feb. 1 – 2.

ATHENS, Ga. – The Georgia swimming and diving teams were swept by the Texas Longhorns on Saturday in Gabrielsen Natatorium.

“I’m happy with today,” said Tom Cousins Swimming and Diving Head Coach Jack Bauerle. “I think you have to be real aggressive in meets like this and we took no time away. We did our weights, we did max this week, we did all the workouts, we started classes, so they swam un-fresh. I was proud of them. I think this meet’s going to help us.”

There were 11 individual first-place finishes among eight Bulldogs.

Also for the Lady Bulldog (2-2, 2-1) Veronica Burchill and Danielle Della Torre notched wins in the 100 freestyle and the 200 breaststroke, respectively. Burchill went 49.25, while Della Torre stopped the clock in 2:12.83.

Georgia travels to Tennessee next Saturday and will be featured on the SEC Network at 11 a.m. Georgia will return to Athens for the Senior Day meet with Emory on Feb. 2. Georgia will be hosting the SEC Championships Feb. 19-23.

How’s Sam Stewart? Didn’t see him in the results. Looks like he had a rough 400Im at the December invite, after a fantastic summer

Always amazes me how Townley will have like a 7 second drop in the 200 free between now and NCAAs. Guess he better with Seliskar in the mix.

Yeah exactly, it happens every single year. Maybe he just a 100% taper swimmer

It looks like Texas exhibitioned the last event or two so not as close as score says.