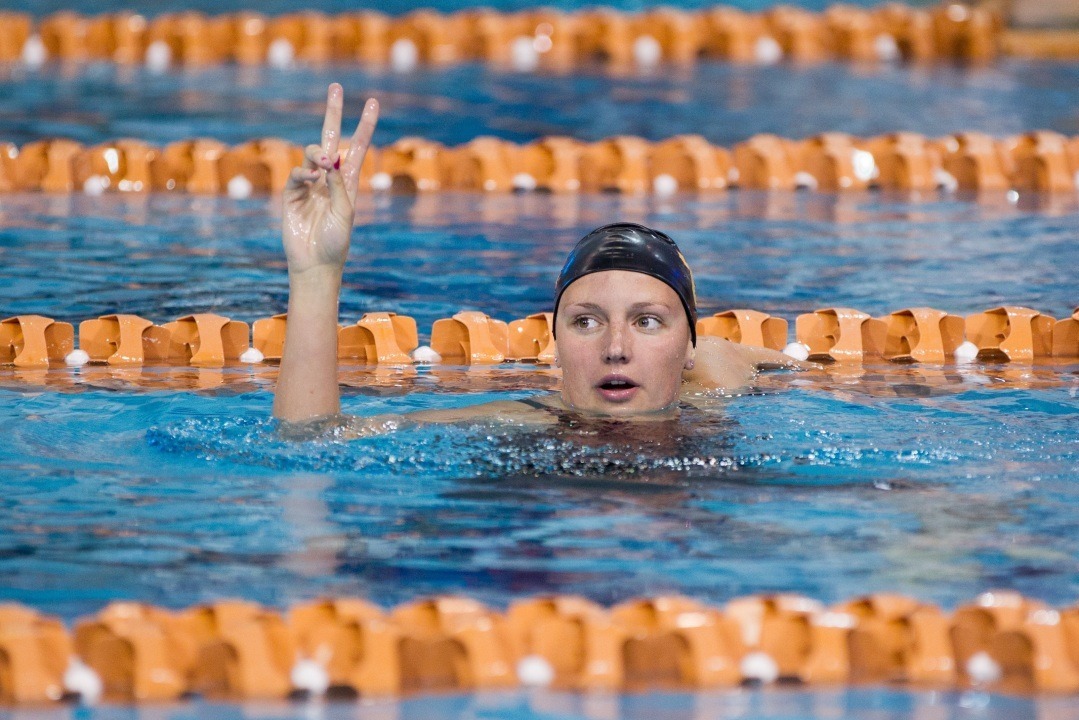 Katinka Hosszu will release her first book two months from Monday in Hungary. The English version comes in 2015. Archive photo via Tim Binning/TheSwimPictures.com

Specifically, the book will be a self-published motivational work that is based on the period between the 2012 Olympic Games and the 2013 World Championships. At those 2012 Olympic Games, she had a very good meet, making two finals and finishing as high as 4th in the 400 IM. Hosszu is working on the project with David Szanto, who has “assisted her in cleaning up her ideas and smoothing everything out,” according to her husband/coach/manager Shane Tusup.

“I think it comes as no shock for me to tell you, that since the London Olympics in 2012, I have gone through a great deal of changes as a swimmer, athlete and as a person as well,” Hosszu said of the purpose of the book. “I feel that it is my responsibility as a professional athlete and potential role model to try and give the benfits of my experiences and knowledge to the future generation of our sport and to my country.

“My main goal of this book is hopefully to change the mindset of at least one person for the better.”

After the 2012 Olympic Games, as alluded to, Hosszu went from star to superstar. She dominated the 2013 FINA World Cup Circuit like we haven’t seen anyone dominate it before, and start putting up event schedules that at the time seemed borderline-insane, but now have become the norm for her. She won three medals at the 2013 World Championships, including gold in the 200 and 400 IM, as well.

The mystery of what Hosszu has done to get to the point she’s at now, and specifically what she did between the 2012 London Olympic Games and the 2013 World Championships, is one of the two biggest paradigm-shifting* questions in swimming right now, and this book will help illuminate that process and show if, in fact, it is repeatable in a larger portion of the swimming population.

*Editor’s Note: The other question is how far can USRPT take Michael Andrew.

She – Hosszu – is certainly a better role model and inspiration for young kids around the World, although she may not have won an Olympic medal, than disgraced American football players 🙂

Kim, Did you actually read my comment? What part of it indicated to you that I thought Katinka was a poor role-model to you? I stated: 1. I want to read the book. 2. I respect Katinka. And 3. I wish her success with the book.

My comment was actually supporting your assertion that she is a good role-model, because I want her to sell MORE books, “but after winning at the Olympics she might sell to potential new fans who want to read her inspirational story!”. My point was that, right now I don’t think the group of people who know enough about her to be motivated to buy the book is as large as it will be after… Read more »

I think the transition she went through after the 2012 Olympics is something worth writing/reading about. As Braden said she went from star to superstar. She became the Iron Lady. She showed us a different perspective on how professional a professional swimmer can be and how swimming fast can be done year around and not just once or twice a year, being completely under the radar for the rest of the year. Getting right into the World Cup circuit with such an insane schedule after a disappointing Olympic Games is not an easy task. It will be interesting to see how she got to the point where she’s at right now from her perspective. I’m sure we’ll get a great… Read more »

Hungary’s Iron Woman- Is she writing a book about Krisztina Egerszegi? Hosszu- Who are you again? You have not done anything worth writing a book about. No world records, No olympic medals, 1 good year of swimming. You dont get a book for 2 world championships and a world cup. You get a good job, keep it up and maybe you can be the second best Hungarian female swimmer of all time because Egerszegi is the best. When you can dominate like she did on an International level, then you can write a book. Until then get in line. Ledecky has not written a book and until she does, you can’t!

Although I will be quite interested to read the book myself, respect Katinka and wish her only success, I must admit that I think this idea is premature. It seems to me that it would sell much better after she demonstrates a complete turn-around by continuing her success in Kazan and then making a better showing in Rio than she did in London.

One season winning at Worlds and one at Europeans along with World Cup prize money are significant, no question about it; but, even people who know about swimming might say that the World Champ’s after an Olympics tend to be somewhat less competitive, that Europeans doesn’t include most of the swimming nations of the globe, and that… Read more »

If i had her talent , age , training in Usa , knowing multiple languages , and know my value , i would do exactly the same !!! she is smart