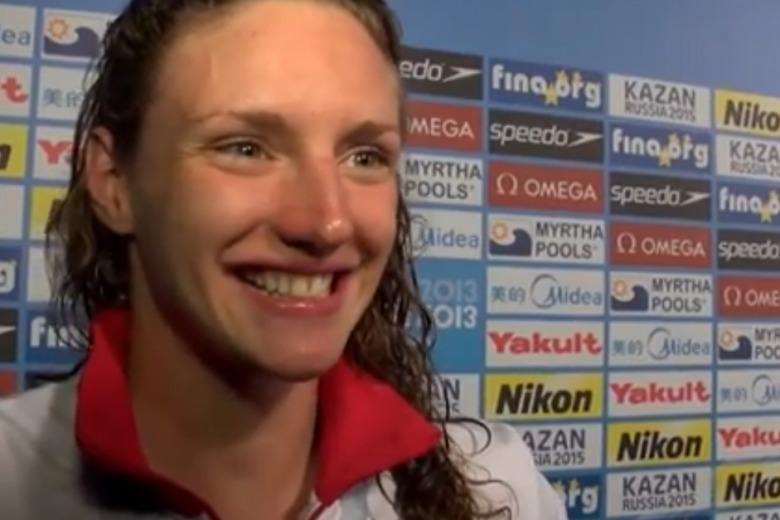 Perhaps the premier race of the night, Hungary’s Katinka Hosszu saw a year of insane training, travel, and competition pay off upon culmination of a victory in the women’s 200 IM in 2:07.92. This is her first worlds medal since taking the 400 IM in Rome in 2009 (she also won bronze in the 200 IM and 200 fly that year).

Hosszu got out blazingly-fast in this swim, including the best butterfly (27.20) and backstroke (32.19) splits in the field. Perhaps spurred on by a phenomenal 100 backstroke prelim on Monday morning, that’s the first time she’s ever done the front-half of this race in under a minute. The 59.39 midway split she had was a full second faster than she was in the semi-finals, and though she gave a little  back at the end, she still took a sizable win in 2:07.92.

Hosszu hit the wall with a ferocity that indicated that she wasn’t done either, leading to great hope for her 400 IM later in the meet.

The runner-up was Australia’s Alicia Coutts, who was elated as compared to the tears we saw from her silver in the 400 free on Sunday. She swam a 2:09.39, which was slower than she was to win silver in London, but good enough to sit on the podium again here.

Mireia Belmonte-Garcia gave spain their second medal of the meet with a 2:09.45 for bronze. This is one of 9 potential events for her at this meet. Though she probably would have preferred a silver, her closing split, which was the fastest of the field, indicates that she’ll continue to be strong as the races get longer for her.

China’s Ye Shiwen, the defending Olympic Champion, was 4th in 2:10.48. She had another very good closing 50 freestyle, but it wasn’t quite as good as we’ve seen it in the past, and she was also in dead-last going into that freestyle. She, like countrymate Sun Yang, has talked all year about being a bit out of shape.

As Katinka highlights, she likes to see her opponents. She’s racer, she swims against others not against world records. That’s why she wins when it counts. 🙂 Adrian seems to have similar attitude. Hosszu was ready to hold off Shiwen over the last 50m but Shiwen wasn’t where she should have been. But very clever not to celebrate too early as Coutts on her left side (Katinka always breathes on right) wasn’t bad at all over the last 50m. I believe Hosszu has a great shot at double. She has raced so much that when fatigue starts to hinder others over the last days, Katinka knows how to fight against it. The 400IM final is on the last day. It… Read more »