Katie Ledecky smashes American record with 4:26.58 in the 500 freestyle 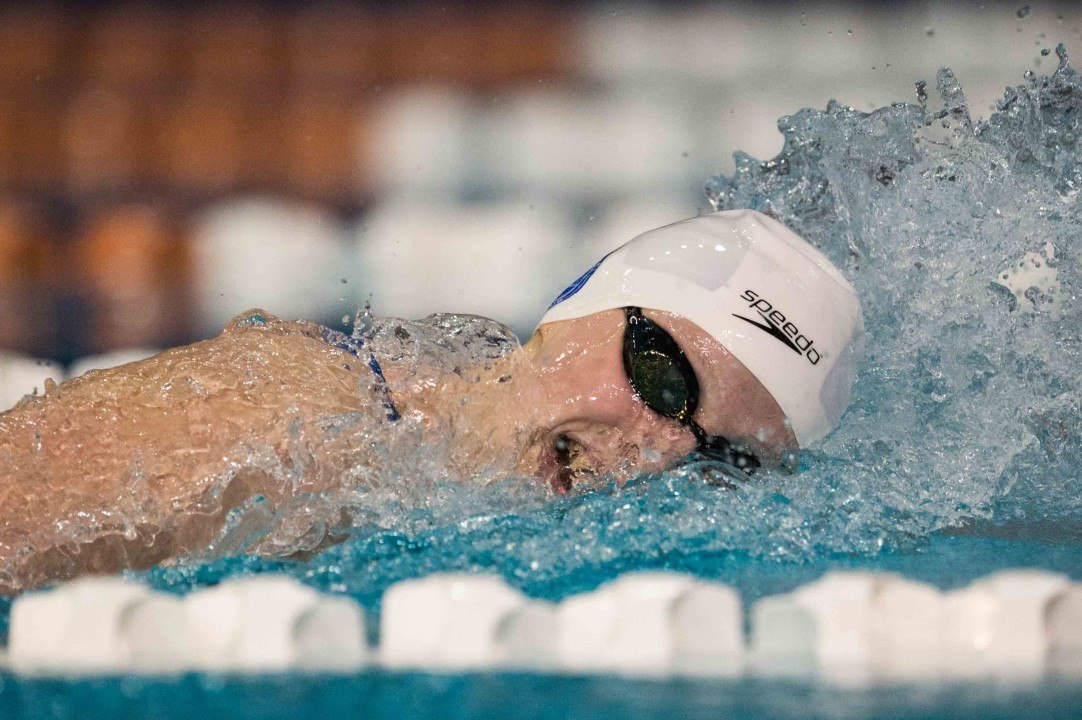 At 17 years old, Ledecky is now the fastest woman in history in the event by nearly four full seconds. Archive photo via Mike Lewis/Ola Vista Photography

See video of the swim here, thanks to Dave Bell.

The record books are on high alert every time Katie Ledecky touches the water, and today she took down another.

Swimming at prelims of the DC Metro Champs with her Stone Ridge High School team, Ledecky obliterated the American record in the 500 free going – are you sitting down for this? – a 4:26.58.

The swim and record are still unofficial at this point and haven’t shown up yet on live results, but Ledecky’s otherworldly time has already hit the Twitter-sphere like a freight train.

(Update: the swim is now official and appearing on the meet’s live results, which you can find here.)

Last February, Ledecky became the first woman ever under 4:30 in the event, going 4:28.71. But she clearly saved her best stuff for her senior year, chopping over two seconds off that time. She’s now the fastest woman in history in the event by nearly four full seconds.

In addition to the American record, that swim should stand up as the new national independent high school record and overall national high school record as well as the 17-18 National Age Group record. In fact, Ledecky is still 17 for another month, meaning she has over a year to re-set the NAG record into even more unbelievable territory.

Ledecky will have another shot to lower the record in Saturday night’s finals, but with the way she attacked tonight’s race, it seems more likely she’ll use finals to focus on her 200 free and relay events for Stone Ridge.

You can find live results of the meet here.

Is Katie going to Stanford or deferring for a year and staying with Bruce?

My guess would be Stanford. Going to Stanford and still working with Bruce over Christmas break etc. would involve less of a change than not having any school at all for a year–and then going back and trying to combine school and training together again.

I (hope) she should not compete in College. It will be a disaster for her.

Anyone know if there is a live stream of this meet?

Do you want to know how her high school team works with her? Is she required to swim high school dual meets? How many high school practices does she go to per week?

Interview before her last high school meet this week.
Funny to see her swim at 6 years old. 🙂
https://www.youtube.com/watch?v=VuBmFzQMvFs

Hmmmm…. I wonder how she is capable of achieving such performances?? Some of you guys who commented above would be very suspicious when non-US swimmers have good performances year round. Yet, is Katie’s case nobody has any doubts, everybody is full of awe… Why, because she is a US swimmer??? I mean, her times are really close to the times of males, despite the physical differences between males and females. I have nothing against Katie Ledecky, well against the malicious double standards of some commenters.

Yes! I wondered when that kind of comments would come! 😆
We have the first one.
Please, don’t try to launch the same debate as last year for the same meet when it turned into a very sad discussion.
http://swimswam.com/katie-ledecky-breaks-american-record-500y-free-dc-metro-champs/

I’ve never attacked Chinese swimmers unlike a few others here for example. Yes, we can have serious doubts about Russian athletes because it’s clear now it has been a State doping there in many sports in the last decade. But that’s not a reason to accuse all Russian swimmers today. Yes, I have serious doubts when I see a former doper coming back and running or swimming as fast as before his suspension.… Read more »

There actually are non-US swimmers who have good performances year round. Is there any evidence than any of the posters have expressed doubts about the legitimacy of such performances? Is it a double standard if KB says you would be very suspicious if there is no evidence that KB is correct in hi claim?