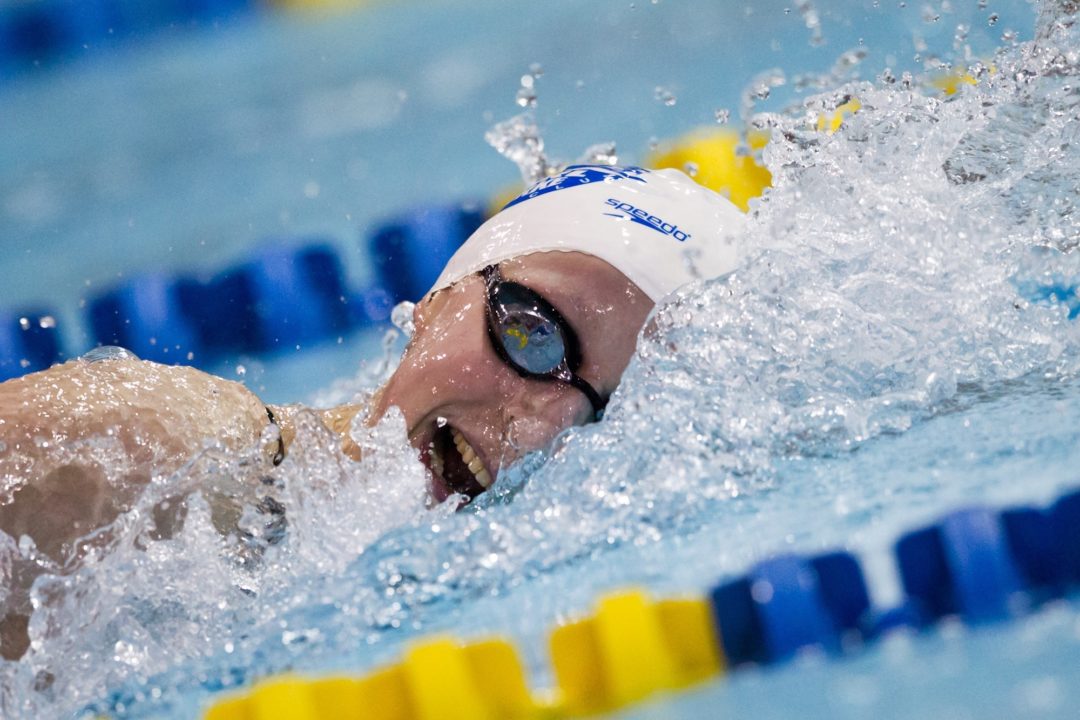 Not only is Katie Ledecky young, she's almost a babe on the national stage. (Photo Courtesy: ©Tim Binning/TheSwimPictures.com)

Youngster Katie Ledecky, has made the US Olympic Team at only 15 years of age making her the youngest swimmer currently qualified for the US Olympic swim team.  Ledecky won the women’s 800 freestyle in 8:19.78, after flirting with the world record pace for the first 400 meters.  Ledecky controlled the race from start to finish, taking the swim out at a freight-train pace but never slowing down. She showed incredible guts to take the race out incredibly hard, but her trademark is becoming a hard start, but never letting up.

Ledecky is not just inexperienced, she’s about as new as it gets to this level of meet. Last summer, her and her coach Yuri Suguiyama intentionally chose to swim Junior Nationals instead of Senior Nationals, because they thought it would be better for her long-term development. Even at Winter Nationals, she took ill and missed an opportunity to race the best.

She had a slight dose at the Missouri Grand Prix, but even that was one of the more lightly-attended meets on the Grand Prix circuit. She swam some relatively big age-group and high-school level meets, but nothing even remotely on this level. The biggest spectacle that she was a part of up until this point was the Charlotte UltraSwim Grand Prix just in May, where she got a taste of swimmers like Allison Schmitt and Chloe Sutton.

But even there, she stepped up and charged the lead and took an 11-second victory. That’s what really makes this victory amazing. Some 15-year olds have experience. Missy Franklin at 15 had already traveled internationally as a member of Team USA for the Duel in the Pool. Elizabeth Beisel had already been on a World Championship team when she made the Olympics in 2008 at this same age.

Ledecky hasn’t even come close to that. Sometimes, young swimmers are breakouts at the Olympic Trials because they weren’t there at the last meet. Some young swimmers, however, transcend into another class of breakout, where they just show up and are almost too new to be afraid of the competition. She doesn’t know that Chloe Sutton and Kate Ziegler can close like crazy. She doesn’t know that going out in a 2:01 and still breaking 8:20 at the end is unreasonable.

At that point, all she has to be able to do is handle the atmosphere, the literal bright lights, and the 12,406 fans in attendance. By no means is that easy, but it’s just one hurdle, and Ledecky flew over it.

Way to go Katie – we were pulling for you!

I don’t think she is that tall.

That is tall.
Even if she’s not that tall yet, she hasn’t finished growing so she can still be taller.

She’s another one in the new breed of giants who can swim really well.

She looked about the same height as Zeigler when they were interviewing them.