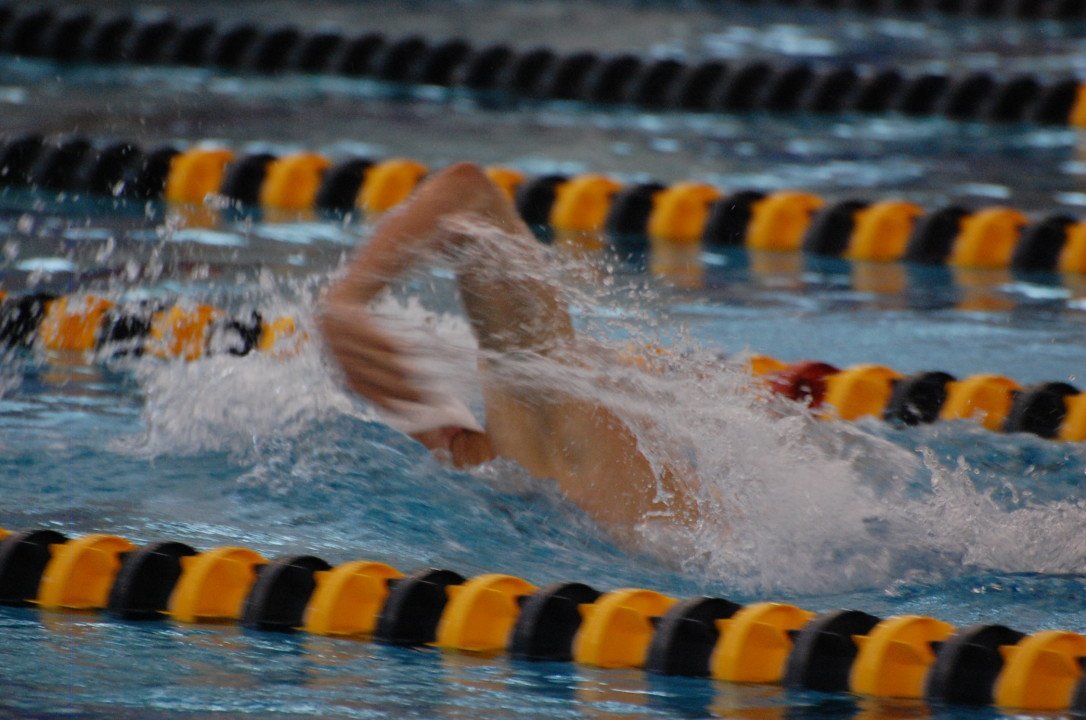 Shawnee Mission East defended their state title from last year, thanks to a deep and well-rounded roster. Jordan Portela of Lawrence Free State and Sam DiSette of Overland Park Blue Valley North took down state records and dominated in each of their individual events. Stock photo via Anne Lepesant

Jordan Portela and Evan Yoder, both of whom will be swimming at the University of Minnesota this fall, got Lawrence Free State High School off to a good start at the 6A State Championships this morning in Topeka, Kansas, with a victory in the 200 medley relay. Portela and Yoder, alongside Evan Eskilson and Corey Schultz-Bever, won the 200 medley relay by over a second, taking down Shawnee Mission East High School.  Portela had an incredible split in the relay, swimming his 50 fly in 21.64 to out-split all but two swimmers in the entire championship final; the freestylers from Shawnee Mission East (2nd) and Wichita East (3rd) both out-split Portela.

Evan Yoder followed Portela with a victory of his own in the 200 IM, winning the state title in a time of 1:53.31, just ahead of Tarrin Fisher from Washburn Rural High School.  After breaking his own state record in the 50 freestyle in prelims yesterday with a 20.33, Sam DiSette from Overland Park Blue Valley North charged to the win in the 50 today in a time of 20.09, well ahead of second-place-finisher Hayden Linscott of Shawnee Mission East who touched in 21.40.  Shawnee Mission East also took 4th, 7th, and 10th in the 50.

Jordan Portela rocked a new state record in the 100 fly, posting a 48.66 to defend his title from Preston Harrison of Manhattan High School who finished second in 49.93.  Portela and Harrison are two of only a handful of high school swimmers from Kansas to swim under 50 seconds in the 100 fly at the state meet, and are the only two who have ever done so in the same heat at state.  In his charge to silver, Harrison took over a second off his prelims time and finished over two seconds ahead of third place.

Sam DiSette obliterated the competition and the former state record in the 100 freestyle, posting a blistering 44.15 to win by nearly 2 seconds over 50 freestyle runner-up Hayden Linscott.  DiSette took the race out fast, splitting a 20.90 to his feet, a time that could have easily won the regular 50 free (again).  Linscott also had a very impressive first 50 yards, hitting the wall in 21.58 seconds, only 18 one-hundredths off his time in the individual 50 free.  Linscott’s teammate Evan Root from Shawnee Mission East took third in 47.74.

Jonah Park from Blue Valley West took the state title in the 500 with a time of 4:39.78, while Alec Lebeda of Wichita Southeast claimed silver in 4:42.44 and Aidan Holbrook of Shawnee Mission East the bronze in 4:43.12. The 200 freestyle relay went to Overland Park Blue Valley North in a time of 1:25.47, just ahead of Shawnee Mission East who claimed silver in 1:25.72.  DiSette and Linscott battled again over the final 50 where DiSette prevailed, splitting a very fast 19.71 to Linscott’s 20.63 to win his third state title of the day.

As Shawnee Mission East swam to the victory in the 400 free relay they also broke the state record and secured themselves another team state championship title by a commanding 112.5 points.  Though Shawnee Mission East only had one individual state champion (Ian Longan, 100 back), the depth of their team and the strength of their relays carried them to the top of the podium.

John Tran of Overland Park Blue Valley North High School took the 6A state title on the 1 meter board with a score of 440.75 points.  Kyle Furman of Olathe Northwest came in second with 419.45 points and Chad Bourdon of Lawrence Free State picked up third with a score of 410.40.

Update: Hayden Linscott signed with Minnesota after the state meet.

I used to swim with Jordan at All Stars several years ago! He is such a nice guy and an incredible swimmer(obviously) and I have no doubt in my mind that he will do an exceptional job at the University of Minnesota next year!! :)))))))

Agree! Portela and DiSette are both class acts. Minnesota & Alabama are getting much more than just incredible swimmers by signing these two young men.

There was a very large controversy over the 50 free final. The starter did not allow the swimmers to get set and started them while they were on their way down. Sam Disette went 20.9 which Easily would’ve broken 20 if it had been a normal start. The fans all booed and the meet was stoppedand they allowed the swimmers to re-swim if they wanted to. Because Sam and Hayden had to get out and swim the hundred free they chose not to swim the race again. It’s really too bad because this would’ve been monumental to have someone break 20 seconds even though Sam did do it in the relay with a 19.7.