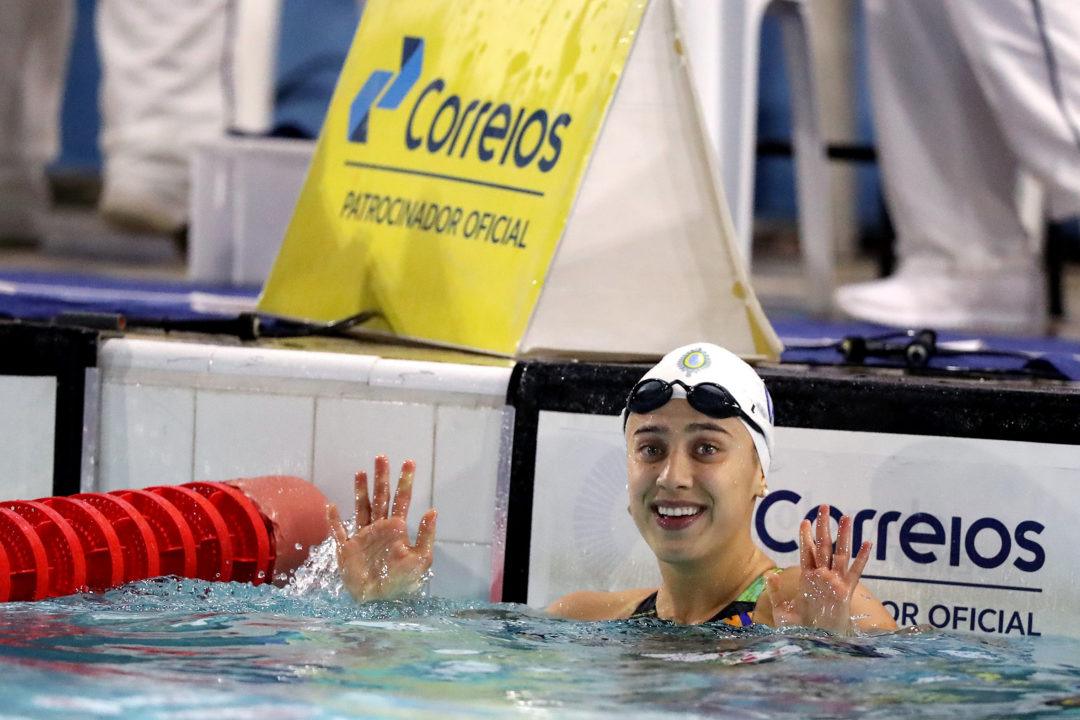 Less than six months after surgery, Larissa Oliveira had a dominant win in the women's 100 free at the Jose Finkel Trophy in Brazil. Current photo via Satiro Sodre/SS Press

Day three of the Jose Finkel Trophy from Sao Paulo, Brazil was much more sprint oriented than yesterday, with the 100 free, 50 breast and 50 back on the schedule. The grinders also got their opportunity to shine in the 200 fly.

The 100 free opened the session, and it was a dominant display from Pinheiros.

The women’s event was won by Larissa Oliveira, who continues to shine after undergoing surgery as a result of a car accident less than six months ago. She demolished the field on the back half with a closing split of 28.07, touching in 54.93 to drop over a second off her preliminary swim and come within a second of her South American record (54.03).

The Pinheiros men doubled the 1-2 finish that the women had, sweeping the top four positions with a 1-2-3-3 finish. Gabriel Santos followed up his Maria Lenk title with the win in 49.06, just ahead of Pedro Spajari (49.13). Marcelo Chierighini and Cesar Cielo then managed to put four Pinheiros men on the podium with a tie for 3rd in 49.47. Marco Ferreira (49.59) and Henrique Martins (49.83) also got under 50 seconds in 5th and 6th.

Santos, Chierighini and Cielo are coming off a successful silver medal performance at the World Championships in the 400 free relay, just a year after finishing a distant 5th at the Olympics.

Arguably the country’s best event, some heavy hitters went to battle in the men’s 50 breast.

Joao Gomes and Felipe Lima both performed exceptionally at the World Championships, with Gomes becoming the 2nd fastest swimmer in history (26.52) and winning the silver, and Lima now sitting 4th all-time in 26.68. On top of those two, Felipe Franca was the 2011 World champion in the event, and Pedro Cardona beat all three in the 100 on Tuesday.

Shortly after the 100 free Medeiros was back in action in the 50 back final, earning the win in a time of 28.44. When she won the event in Budapest, she became the first Brazilian woman to win a gold medal at the LC World Championships. She did so in a time of 27.14, the third-fastest swim in history.

Another Argentinian, Andrea Berrino of Unisanta, picked up the silver medal in 28.73, and Natalia De Luccas (29.59) of Pinheiros took 3rd.

Virginia Bardach picked up the 4th medal for an Argentinian on the night with her silver in 2:14.79, and Giovanna Tomanik put another on Pinheiros’ tally with the bronze in 2:15.37.

Two-time Pan American champion Leonardo de Deus wrapped the session up with an impressive 1:56.79 in the men’s 200 fly, picking up his first win of the meet after strong showings in the 400 free and 100 back on days 1 and 2.

A big day for Pinheiros extends their lead in both the men’s and women’s team scoring, and by virtue the combined standings. The women have a nearly 200 point advantage over Unisanta, and the combined race is all but over with almost 500 points separating them and Minas. However, the men’s race is still relatively close, as Minas sits 83.5 points back with two days to go.