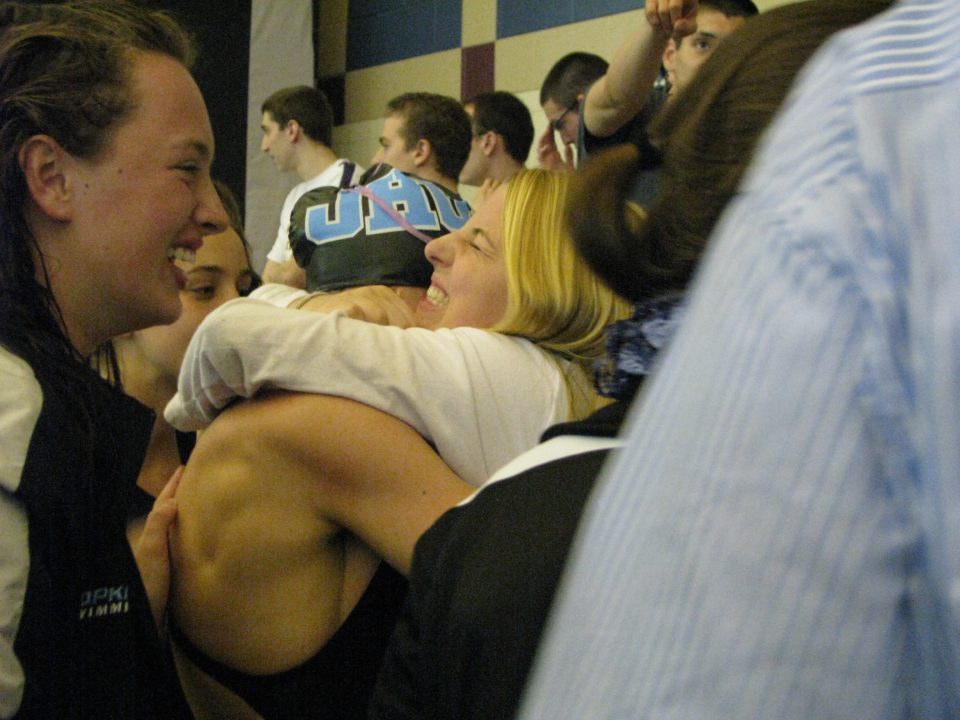 The Emory women and Kenyon men pushed further ahead in their quests for NCAA titles, but Johns Hopkins left the pool on the biggest high on Friday. (Janna Schulze/SwimSwam.com)

The 3rd day of the 2013 Women’s NCAA Division III Championships started out with a scary moment. Kenyon’s Hannah Saiz touched first in the 200 fly in 1:57.42, breathing to the side the whole way. She was gunning for the record, but missed it by about two seconds in this final.

When she finished, though, something was clearly wrong. Saiz almost looked upset after the race, even after winning her first NCAA title (she ran into the wall that was Logan Todhunter the last few years). But it wasn’t disappointment with her time. Suddenly, timers were scrambling and holding Saiz up by her arms; just after finishing her race, Saiz had to be pulled from the pool and wheeled to the medical room. Speaking after her swim, she relayed that she didn’t even remember the last 100 yards of her race.

Fortunately, fast actions averted any disaster, but just one more reminder of the need for alertness even at the most elite levels of swimming.

Still, the win was huge for the Kenyon women as they clawed to stay in the team battle in this race. Emory ultimately matched their scoring though, with sophomore Nina Zook taking 4th in 2:01.86 and Leslie Hackler winning the B-Final. Denison’s Michelle Howell, who’s having a big meet for them, was 3rd in 2:01.53.

The Ladies picked up their second win of the session in the very next event, when Celia Oberholzer swam a 53.46 – a new Division III Record (breaking the 53.85 owned by Brittany Sasser of Amherst).

Hamilton’s Margaret Rosenbaum took 2nd in 54.18, swimming very well in her second 50, and Johns Hopkins’ Taylor Kitayama was 3rd in 54.57.

Emory again though got a win in the B-Final from Anna Dobber, and held points about even through this race.

Neither of the two leading teams was a big factor at the top of the women’s race, but UW-Whitewater’s Amy Spaay made it two-straight record-setting performances as she got the Meet (though not overall) record with a 1:00.85. Lindsay Payne from Williams still holds the latter in 1:00.54. That’s Whitewater’s first ever individual NCAA Champion, and for the once national-power is their first NCAA points since the year 2000. Spaay is a former Arizona Wildcat – a program that put two breaststrokers in the top 8 of the Division I final tonight as well.

Calgin’s Elizabeth Counsell had a six-tenths drop from prelims to jump up to second place in 1:02.79, and Stevens’ Brittany Geyer was 3rd in 1:03.09.

After her scary moment earlier in the meet, Saiz wasn’t cleared to swim on Kenyon’s 800 free relay (though she was walking around the pool deck.) It might not have mattered, though, as Johns Hopkins got hot at the end of this meet and took the victory in 7:19.14. That included a 1:47.42 anchor from sophomore Anastasia Bogdanovski. That’s the first time that Johns Hopkins has won this race (and only the third title in program history in any event), but with four underclassmen they could make it two-straight next year.

Kenyon took 2nd in 7:20.84; their star leg was Hillary Yarosh in 1:48.41. By .01, the Kenyon women took 2nd ahead of Emory, which was as big of an emotional boost going into the meet’s final day as anything. With a big lead, and what looks to be another pile of scorers to end the meet, Emory looks very comfortable headed into the final day.

The talk of the men’s meet was “who is Simas Jarasunas“? Jarasunas, listed as a junior for Stevens, won the men’s 100 breaststroke in 54.57 – very nearly taking out the Division III Record.

Even those familiar with DIII and Stevens swimming didn’t know much about him, though. That’s because, as he revealed after the race, he’s a first (and maybe only) semester addition to the team for this spring, and quite a valuable one at that.

Jarasunas hails from Vilnius, Lithuania (its capital city that has produced a lot of notable athletes). Lithuania happens to be the same country from whence Ruta Meilutyte, women’s Olympic 100 breaststroke champion, hails. There’s some breaststroking in the blood of the Lithuanians, it seems.

Simas Jarasunas is only in his first semester with Stevens, but he’s eating up the NCAA atmosphere already. (Janna Schulze/SwimSwam.com)

The curiosity of his win was only surpassed by the excitement of the meet-closing 800 free relay. With all eyes focused on the top two seeds, Denison and Kenyon, and how their relative orders would affect the team battle, Johns Hopkins took advantage by flying under the radar.

Meanwhile, Johns Hopkins used some big underwaters and great exchanges to not just sneak in to the battle, but blow through the final heat and break the Division III Record in 6:29.27.  Their last two legs, Dylan Coggin and Nicholas Schmidt, were both 1:36’s to pull away from the field in this race.

The finish of that race, for a multitude of reasons, was about as loud as you’ll hear a swim meet. That was both as Hopkins chased down the record, and as Kenyon tried to chase down Denison. With a 1:37.24 anchor from Ian Richardson the Lords pulled off a second-place finish in 6:32.58, with Denison taking 3rd in 6:32.98.

Though Denison does have a great last day of swimming (between diving and the mile, especially), they’re nearly 50 points in the hole. For Kenyon, anybody but Denison (the top seed) winning was a good thing for them.

Among other individual winners on the third day of the meet included Emory’s Miller Douglas in 1:46.64, just out-touching the 400 IM champ Alex Anderson, who was a 1;46.71.

This is a third-straight win for Emory in the 200 fly, though it was the first of those three for Douglas.

And finally, Dylan Davis from Johns Hopkins took the 100 backstroke in 48.62. This was the tightest race of the meet so far, as Denison’s Sean Chabot was 2nd in 48.63 and Connecticut College’s Samuel Gill was 3rd in 58.65. That’s a top three separated by just .03 seconds, and only another two tenths back were the next three swimmers.

The Johns Hopkins 800 free relay looks to their teammates on the sidelines to rejoice after breaking the Division III National Record to close the session (Janna Schulze/SwimSwam.com)

What’s the diagnosis/prognosis for Saiz?? Now that’s what I call leaving it in the pool. It doesn’t say which event it was but I’m assuming 2Fly since she breathed to the side the whole way.

Not sure about Saiz but it’s a good sign that she was on deck cheering on her teammates in the 800 free relay.
No, the real advantage for Big Red is the 200 back (yes, Weik could win the mile but the Lords also have an A finalist) where Denison could have 3 A finalists to 0 scorers for the Lords…..that’s the event that will tell us whether this comes down to the 400 free relay and a replay of two years ago.
I still think Kenyon goes into the last event with a small lead and they are a lock in the 400 free relay.