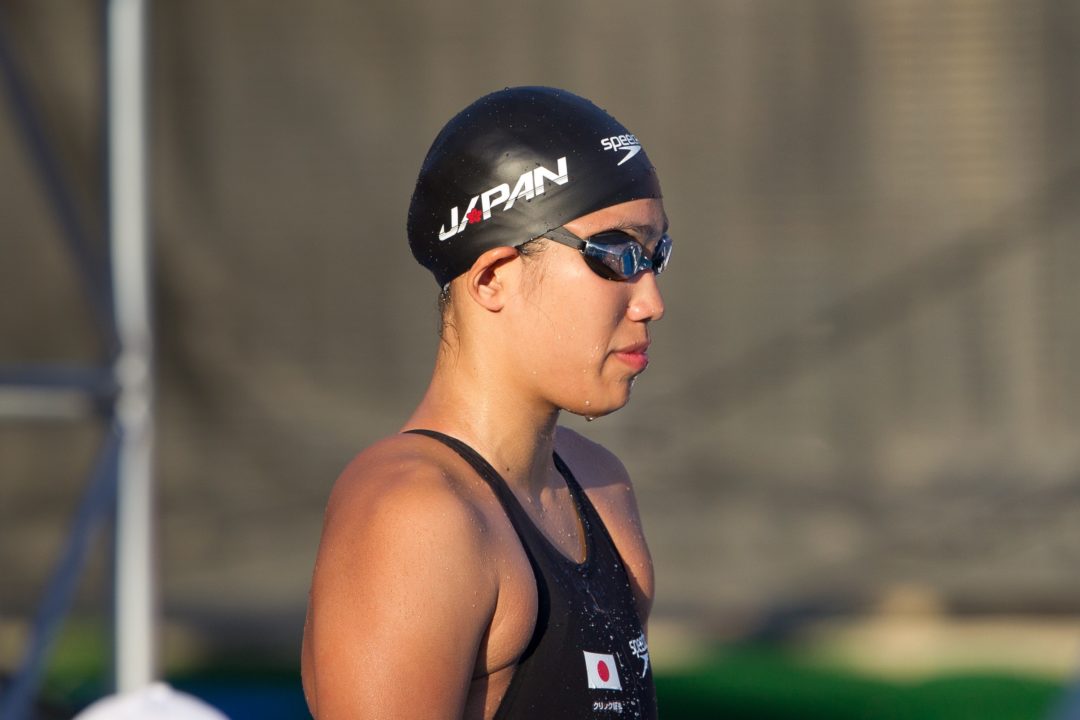 No new Olympic spots were handed out, but Haruka Ueda did look very good in the women's 50 free. (Photo Courtesy: ©Tim Binning/TheSwimPictures.com)

The final day of the 2012 Japanese Olympic Swimming Trials in Tokyo didn’t hand out any additional individual qualifications under Japan’s much-more-rigorous qualification standards, however it did provide a bit-more clarity to some of Japan’s most pressing questions for the Olympics

That’s because in the men’s 100 fly, Takuro Fujii finished in an outstanding 51.91, which is second in the world this year behind only Australia’s Christopher Wright. Touching 2nd behind him was Takeshi Matsuda in 52.37, and Hirofumi Ikebata in 52.43.

After Fujii didn’t swim well in the 100 free, this race pretty much seals that he should be the medley-relay member for the fly leg (he was also in contention for the free), and the freestyle anchor should be left to Matsuda (who didn’t swim the 100 free, but was awesome in the 200).

Kenta Ito could be an even better option on the anchor than Matsuda, though he didn’t even make it out of prelims of the individual 100. He did win Sunday’s 50 free in a strong time of 22.20 (ahead of runner-up Yuuki Kawachi in 22.44), which skims a National Record, but even that wasn’t good enough to make the Japanese squad. Based on the roster released later in the day, he isn’t even a candidate for relay selection.

What does this all mean? Mainly, that the Japanese 400 medley relay will be Ryosuke Irie, Kosuke Kitajima, Takuro Fujii, and Takeshi Matsuda. Expect some sort of informal time trial between now and London (probably the summer’s Japan Open) that could flip the order of the last two, however. That would be the same relay as we saw at worlds, but with an on-fire Matsuda anchoring instead.

In other races on the day, Kouhei Yamamoto gave up nearly two seconds in the closing length to Youhei Takiguchi, but held on to win by margin of 15:01.13 to 15:01.88. Though both swims were easily (by 10 seconds) Olympic invitees by FINA’s standards, Japan won’t be taking either.

Haruka Ueda won the women’s 50 freestyle sprint in 25.17; not quite as impressive as her National Record in the 100 (nor an Olympic-worthy swim) but still a good mark. Don’t be surprised if she’s allowed an additional entry in this race to go with her 100, since she’ll be at the meet anyways. 3rd-place finisher Miki Uchida, who’s only 16-years old, broke a Junior National Record in 25.48.

And in the other race on Sunday, the women’s 200 backstroke, Shiho Sakai continued to struggle and though winning, swam only a 2:09.59, which leaves one of the biggest names in Japanese Swimming off of the Olympic roster.

Aya Terakawa, after posting the world’s best 100 back time earlier in the meet, sat out this 200 altogether; she probably could have taken the win, but was unlikely to battle for a medal at the Olympics.

Pierre de Frédy, Baron de Coubertin, is rolling in his grave: his ideal of competing over winning is now blatantly thrown out (as prior it was coveted, but not so overtly).

Shiho Sakai is but one of many casualties: swimming is one of the others.

That being said, FINA A cuts should be faster.

And I beg to disagree: once again, Japan is lacking a freestyle leg to be competitive (even if they set Matsuda on fire!).

Agreed; Matsuda is good, but he’s no sprinter. His 100 fly really wasn’t all that impressive. Overall, a very disappointing Japan swim. Kobori, Koga, Tomita, Shirai, Miyamoto, Uchida, Ito, Fujii, and Shioura all off their best, and that’s just the men (though the women did seem to be a bit better).