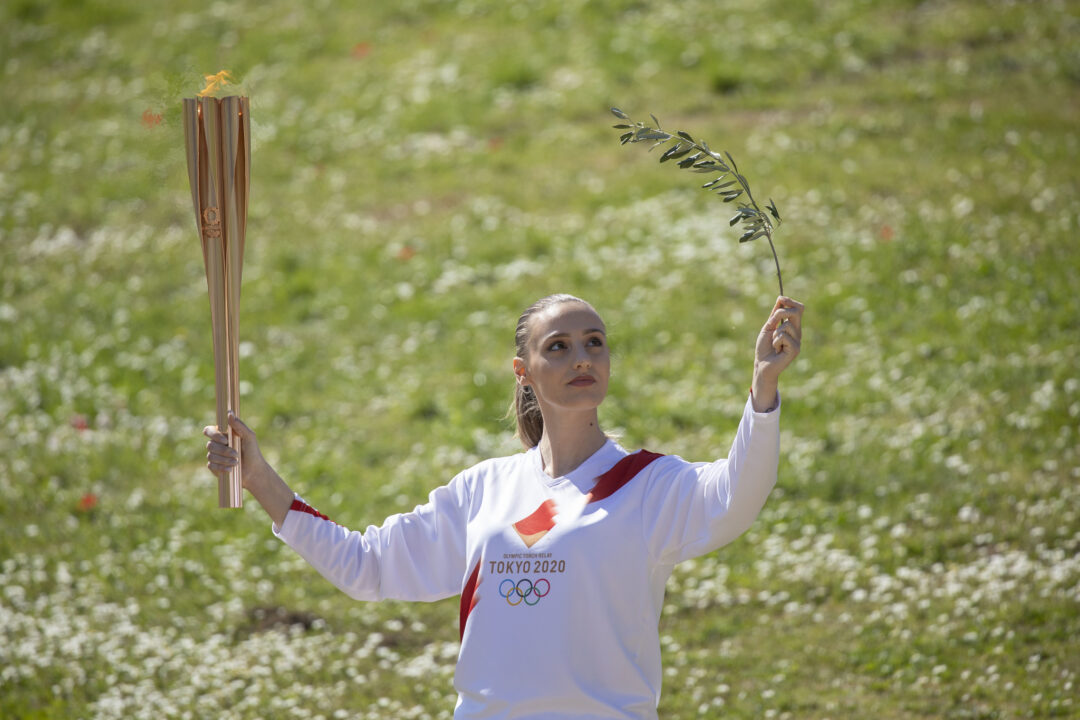 Greek shooter Anna Korakaki was the first person to carry the Tokyo 2020 Olympic torch through its initial leg in Greece in March 2020. Archive photo via Greg Martin/IOC

17-year old Lydia Jacoby got her Olympic rings tattoo on Sunday; 9 years ago, Chris Collinsworth gave a tattoo to another American 17-year old swimmer that you’ve probably heard of.

In a matter of days, Schoenmaker established 2 new Olympic records, a world record, and won Olympic silver and bronze for South Africa.

According to the IOC, a total of 3.05 billion unique viewers tuned in to coverage across linear TV and digital platforms.

The Tokyo 2020 Olympic Torch Relay will begin on Wednesday from the J-Village National Training Centre in Fukushima Prefecture on Thursday, March 25. It will then travel across all 47 prefectures in Japan over 121 days, landing at the Olympic Stadium for the Opening Ceremony of the Olympic Games on July 23.

The relay, delayed from its original planned start in 2020 by the global coronavirus pandemic, is still expected to travel its original route. The approximately 10,000 originally-selected torch bearers were given the opportunity to retain their spots in the new relay. The kickoff ceremonies and number of operational staff participating in the relay will be scaled back due to public health concerns.

The torch was lit at the Temple of Hera, the sacred site of Ancient Olympia in Greece on March 12, 2020, the same day as most of the world began to shut down because of the looming threat of coronavirus. It arrived in Japan on March 20, 2020, where it has remained, waiting 370 days for the relay to start.

On March 11, two weeks ago, it was displayed at the Otsuchi community centre in Iwate prefecture, a region that was hit hard by the 2011 earthquake and tsunami. This is part of heavy symbolism by Japanese organizers around the impacts of the earthquake, with some Olympic venues being placed in or near Fukushima, where the famous nuclear reactor meltdown happened.

The region has been hit by several new earthquakes over the last month, as is common in the very seismically-active reason, but so far there have been no reports of damage to Olympic infrastructure.

The Olympic Torch Relay will officially start in Fukushima.

The first torchbearer will be the Nadaeshiko Japan women’s national soccer team that won the 2011 FIFA Women’s World Cup in the year of the disaster. They will then hand the torch to 16-year old Fukushima native Owada Asato. The full list of torchbearers are announced two weeks before they are due to run.

While there is a lot of ancient symbolism involved, including a mystical-seeming lighting ceremony where the torch is ignited with the magnified rays of the sun, there is no ancient precedent to the torch relay. While the ancient Olympics did keep a fire burning throughout the Games (a tradition resumed in 1928), there was no relay until the 1936 Summer Olympics in Berlin.

The relay used to travel around the world, hitting many countries before arriving at its final destinations. After heavy protests during the global torch relay before the 2008 Beijing Olympics, the IOC decided that future relays would involve the flame being transported directly from Greece to the host country.

The torch, for the first time ever, will be powered by hydrogen during some parts of the relay, while the traditional natural gas will be used in other parts. Specifically, gas will be used in Fukushima and Aichi prefectures as well as parts of Tokyo. This move is part of Tokyo 2020’s commitment to align with the United Nations’ Sustainable Development Goals.

Hydrogen is viewed as a long-term possible solution to replace fossil fuels. On a large scale, the most promising method to use hydrogen to power electric grids is via a process called electrolysis, which uses solar power to generate hydrogen.

Hydrogen does not emit carbon dioxide when it is burned.

Tokyo 2020 will make history by using hydrogen to power its cauldrons and the torch during parts of its journey around Japan. 🙌

Hydrogen will be extensively used by #Tokyo2020 as it emits no C02, as we continue our commitment to #sustainability!

The Olympic torch when viewed from above.

Olympic Torch Relay, By the Numbers