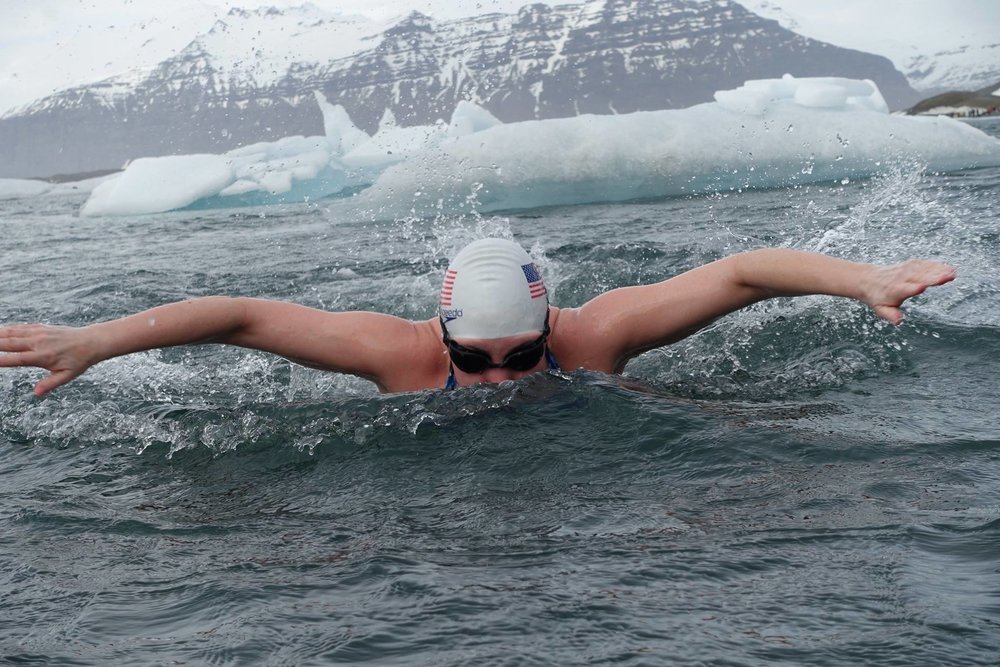 Jaimie Monahan and Cameron Bellamy, both superstars of the open water swimming world will attend the 8th annual Barbados Open Water Festival to be hosted in Carlisle Bay in November.

Jaimie Monahan renowned ultra-marathon and ice swimmer will make her first appearance at the Festival.  The New Yorker is globally known as a Queen of Cold Water swimming but can’t wait to get a swim in the warmer waters of Barbados: “I keep looking at photos of the water there and am getting way too excited – its still  months away!”

She was the first to accomplish the Ice Sevens, her marathon swims include a 92K double Manhattan island swim, swam six marathon swims on six continents in sixteen days, was the winner of the inaugural International Winter Swimming Association’s World Cup and is a seven time US National Winter Swimming champ. The seasoned marathon swimmer learned about the sport of winter swimming five years ago and was intrigued. From the frozen lakes of Siberia to the Perito Moreno Glacier of Argentina to Antarctica, Norway and Iceland, Jaimie has dived in and braved extreme water temperatures.

Ultra endurance athlete, Cameron Bellamy of “#SwimAroundBarbados” and Oceans Seven fame among other amazing exploits is expected to return. At the 2018 Festival Cameron set out as the last swimmers were coming out of the water on a 90K solo circumnavigation of the island and almost 41 hours later became the first person to swim around the island. The South African is currently engaged in intensive training for his upcoming 103-mile swim attempt from Havana, Cuba, to Key West, Florida, in early September.  He will have amazing tales to share at the 2019 Festival.

Over the life of the event the Festival has welcomed swimmers of all ages and abilities from more than thirty-five countries.  From recreational to elite, pool swimmers to channel swimmers, world champions and Olympians, from as far away as Hong Kong, Australia, South Africa and Singapore. Every year the swimmers arrive from different countries but all with a shared passion for open water swimming and heart-warming camaraderie ensues. In 2019 many returning regulars are expected from the UK, Canada, USA and Trinidad, and they will undoubtedly be elated to learn they will have two swim superstars in the mix.

Mark Perry, Swimming Canada’s Distance/Open Water Coach will also be in attendance, accompanying a group of twenty-four swimmers hailing from several provinces across Canada. They will have a week of training and race in the Festival (Nov 9-10). The British-born Perry, previously worked for British Swimming (2006-2014). During his tenure Team GB won three medals at the 2008 Olympics, with David Davies and Keri-Anne Payne capturing Silver in the men’s and women’s 10 K marathon and Cassandra Patten taking Bronze. Perry has already experienced the Barbados Festival, having visited in 2017 as an observer.

The offerings remain the same as in 2018 with three days of practice swims followed by two days of races: 1.5K, 3.3K, 5K and 10K.  Highlights will include professional timing by Sportstats, the usual festival beach party atmosphere with live steel pan music on the beach, unique redesigned commemorative finisher medals for all races completed, winner medals in multiple age categories and numerous random prizes.  The event is scheduled for November 6-10, 2019.