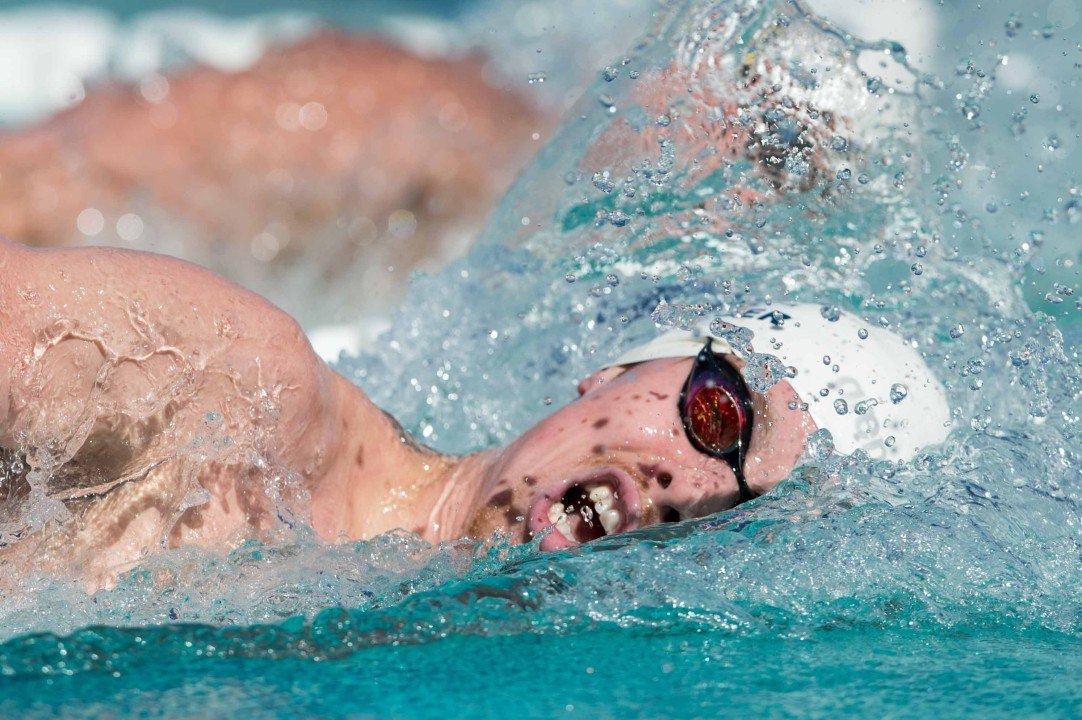 American record-holder Connor Jaeger blasted the fastest 1650 freestyle of the year 2016 in an exhibition swim at the Michigan First Chance Meet in Ann Arbor.

The meet is serving as a taper meet for many of the Wolverine team members who are not competing at the Big Ten Championships, and is also featuring several swimmers from Note Dame and Toledo. And in between the official sessions of the meet, some of Michigan’s professional group members are taking a turn to shine in the short course pool.

Jaeger actually went under the Michigan pool record with his swim, going 14:29.94 – that swim will be “unofficial” pool record. It’s also just outside the top 10 performances of all-time, and would rank Jaeger as the 11th-fastest performer in history if he didn’t already hold the American record at 14:23.52.

Also coming up big in exhibition swims was Japanese backstroker Junya Koga, who set an unofficial pool record in the 100 back with a blistering 45.08. That’s also just outside the top 10 swims ever, and only two tenths off Koga’s short course best of 44.8.

Koga was also 19.08 in a 50 free, according to Michigan coach Mike Bottom.

As for the college swimmers, the most notable performances came from Michigan freshman Mokhtar Al-Yamani. The rookie, also from Japan, smashed his lifetime-bests in the 200 and 500 frees. The 200 was probably his best swim, clocking in at 1:34.77. He was also 4:22.83, a great sign for a Michigan program that has been outstanding in the 200 and 500 over the past few years.

1) What still have to do Gregorio Paltrinieri to be considered (until now) as THE (not A, like Joel Lin wrote) real favorite for the1500 free at Rio? A tremendous consistency and continuos improvements in the last two years (European champ and World champ).: 14.39.67 at Kazan and, last December, 14.08.06, new SC WR (and Paltrinieri is far stronger in LC not only because of his subpar walls, but because of his impressive swimming progression upon every 50m).

2) Sun Yang is a real question mark, above all in the 1500 free. And the last injury he suffered, adds doubts about his capability to train, to get ready for a 1500 free at his maximum level.

It,s gonna be between sun yang and paltrinieri but I suspect paltrinieri will get the gold. Not sure of the wr though.

Using this converter: http://www.csi.org/coursealti.aspx
I get paltrinieris world record as 14:14.96 in yards, if that’s accurate paltrinieri is way ahead of Jaeger in short course, Rio can’t come sooner if sun, Jaeger, and Paltrinieri all show up!!

Not really an accurate conversion for Paltrinieri since he has terrible walls.

I fell so dirty about this. I wish this mattered. Go Paltrinieri!

And paltrinieri forgets how to swim BO

No doubt Paltrinieri is a favorite, but there are some with the ability to swim with him in a 1500m. Jaeger has the talent and the grit to be right in it in Rio. I’ll admit I root against Sun Yang, but he is the standard now for the other guys to meet.

So what’s it take for Michigan guys to make the big ten team if he went a 1:34?

The only way he wins is if Sun Yang fails a dope test. Oh wait that already got swept under the rug

He can win. He can beat Sun Yang. He’s capable against the Italian stud too.