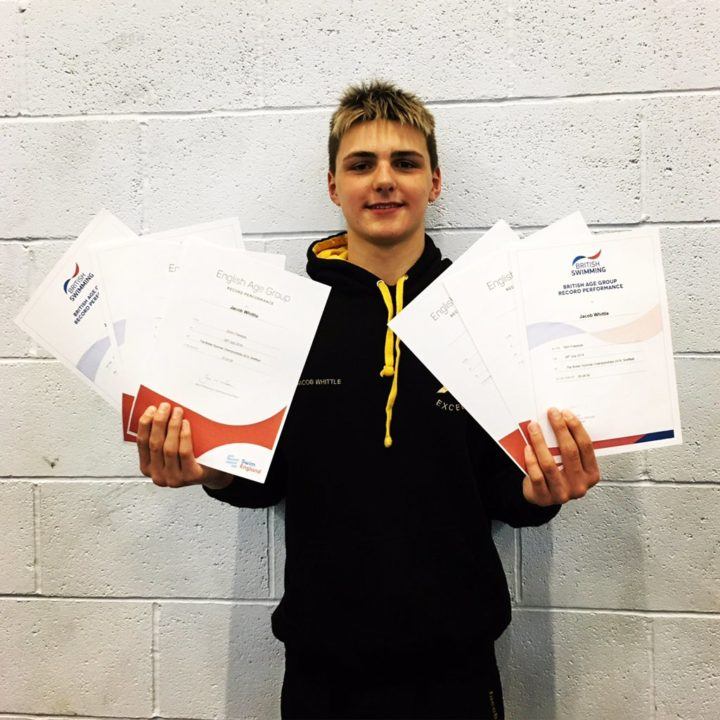 While Britain doesn’t formally record records by age group in short course meters, they do provide all-time rankings by age. They also record national junior records, which are based on an athlete being under 16 as of the day of the swim.

Among the all-time swims that Whittle cleared was a 51.77 by Matthew Richards, who earlier this season cleared the British Junior Record in the 100 free at 49.93, in addition to several other age-defined records. Whittle has almost 2 years before his 16th birthday, when he’d become too old for British SCM Junior Records, to chase Richards’ recent records. At present, Whittle is .34 away in the 50 free, .86 away in the 100 free, and and 2.89 away in the 200 free. Richards turns 16 in December, and broke two records at the same meet this weekend.

Whittle trains in the DX National Squad (their mid-level group) under the daily guidance of Jack Chambers. The club’s head coach, Jamie Main, says that they’re focusing on a controlled approach to development, leaving them hopeful about the upcoming year.

He’s a great kid, been working really hard technically last couple of months, not much intensity as yet, so it’s going to be an interesting long course in 2019,” Main said.

He broke 3 British Age Records at the British Summer Championship in long course earlier this year, and an additional English Age Record.

Craziest is that a 17 year old won with a 1:54 which has to be one of the faster high school girl’s 200 fly times we’ve seen in the past few years. Especially for an early November meet!!