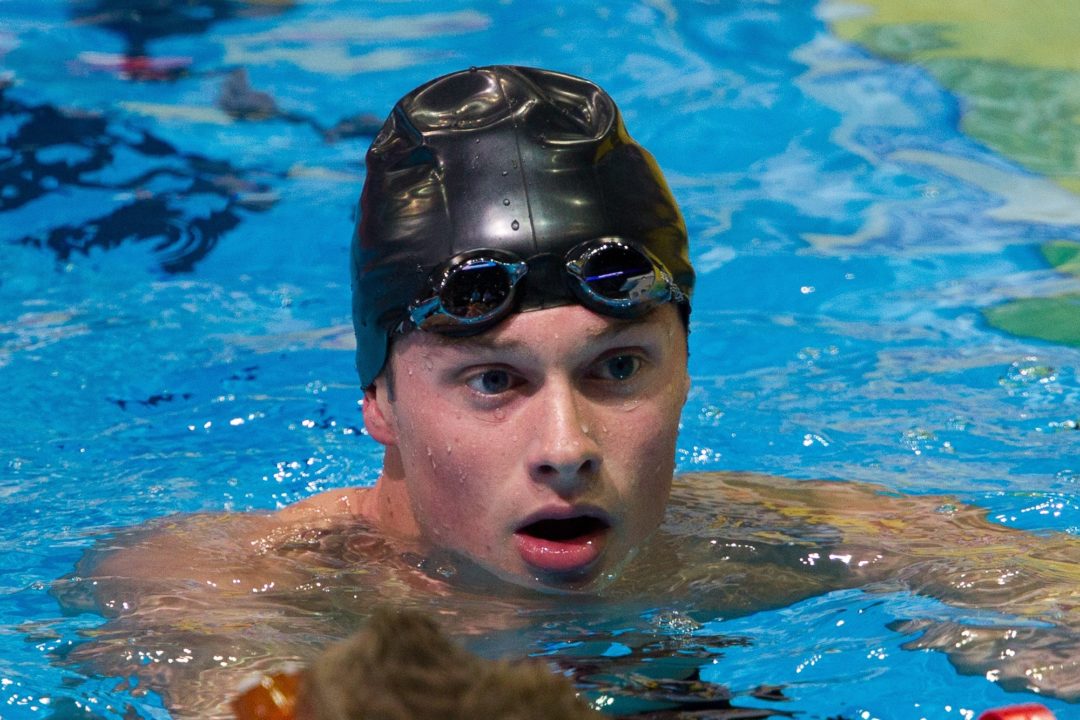 In one fell swoop, Texas has picked up the top swimming and top diving recruits in the country. (Photo Courtesy: ©Tim Binning/TheSwimPictures.com)

For all of the latest news in College Recruiting, check out the category page here.

Jack Conger, the (disputed) number-one recruit in the class of 2013, has made his college commitment to Eddie Reese and the Texas Longhorns this evening, opting against joining Ryan Murphy at Cal. He swims for the Rockville-Montgomery Swim Club under Sue Chen, as well as the independent Good-Counsel High School in the DC Area.

Conger is one of the most unique talents we’ve seen coming out of high school ever. He is within striking distance of the National High School Records in both the 50 free (19.85, off of a 19.43) and 500 free (4:17.51 off of a 4:16.93) – he already has the Independent High School Record in the latter. In between those races, he’s gone 44.06 in the 100 free and a 1:35.25 in the 200 free. He is good enough to replace the relay holes left by the graduations of both Jimmy Feigen after last season, and Dax Hill after this season, as he would immediately become a focal-point of any of the three free relays.

He’s so good at so many different races, we’ll try to avoid bogging down with too many numbers digging into long course, but needless to say if he doesn’t find a way onto the 2016 Olympic Team in something, it will be a huge shock.

Where he’ll fit in at Texas is anybody’s guess. Based on his national and international level entries, he prefers to continue as a backstroker. Immediately, Texas would probably need him most on the medley relay as a butterflier, though he’d have to beat out fellow freshman Clark Smith, as well as Tripp Cooper who had a great freshman season last year for that job. The Longhorns will be losing their top backstroker Cole Cragin after this season, but Kip Darmody is more than capable of filling that spot. Clay Youngquist is also a stud for the freestyle spot.

Basically, what Texas will need from him most badly as a freshman is to score big individual points, and to swim well on the free relays. If he ends up on a medley, it would most likely be as a butterflier. Texas didn’t have as explosive of a class as normal last season (though some late pickups rounded it out well), but with what would seem to be plenty of money to go around this fall, Reese has really shot grabbed a big class. In addition to Conger and Smith, they’ve also gotten Junior National Team breaststroker Will Licon, another elite backstroker in Will Glass, and we’re hearing rumors that another big name will be headed Austin-way tomorrow.

With this, as well the verbal of Young Tae Seo to Florida tonight, the ranks of the available super-profile recruits in the class of 2013 has dwindled to a nearly-empty list. Among the top swimmers left are under-the-radar SwimMAC swimmer Matthew Josa.

What’s overlooked with how successful Texas swimming has been is how good their diving program has been under Matt Scoggin’s direction. They too have been hit hard by recent graduations, but their newest addition will immediately make up for that. Michael Hixon is a multiple-time Junior National Champion who won bronze at the 2010 Youth Olympics on the 3-meter, and silver at World Juniors in 2010 on the 3-meter synchro alongside Stanford star Kristian Ipsen.

In 2011, he broke through to win a 1-meter Senior National Championship too; that 1-meter is his best event, but is often overlooked because it’s not dived at the Olympics. Not all of the heavyweights contended that 1-meter title, but among others he beat out NCAA Champion Ben Grado, as well as names like Dwight Dumais and Zach Nees. He doesn’t dive platform, but should be at least a 25-point scorer as a freshman.

well… shit. Congrats to Conger, but a bit of a mediocre recruiting season by the 2 time defending champs. When can we expect Tandy to commit?

Rumor has it that Tandy will go to Florida state…

We’ve heard similar stories/claims, but not from anyone willing to go on the record, so hard to verify one way or the other.

2-time defending champs did pick up Ryan Murphy, who beat Conger heads-up in the 200 back at OTs and has a faster 100 back. I’m not sure who they have to round out the class, but that’s a damn good pick-up.

Agreed that at least with the NCAA format Murphy and Conger are on roughly equivalent levels. However Cal graduates 4 NCAA swimmers and Murphy is the only one they have to readily replace them as of now.

I think I picked this a whiile ago! just a good fit. congratulations jack and longhorns.

On an international view will he stay only as a great backstroker or will he become a great freestyler? I think he has a great future on freestyle. He remembers me a little from Yannick Agnel. A tall swimmer with no many muscles. We’ll see.

internationally he can become great at the 50-200 free, with his 200 LC needing more development. We all know how amazing his backstroke is. But also his 100 meter fly is very fast 53.0 i beleive.

I agree with you Bobo, Once he hits the weight room and puts on 10-15 pounds of muscle the possibilities this kid has is scary

I really want to agree with you. It gives me pause, though, to think also of David Nolan last year. Predictions were through the roof and he didn’t meet them. I don’t want to write him off because he has 3 more years, but his frosh season didn’t pan out.

Either way, Conger is not too far off Nolan’s level. I’m excited to see what happens! Especially in comparison to his counterpart Murphy at Cal.