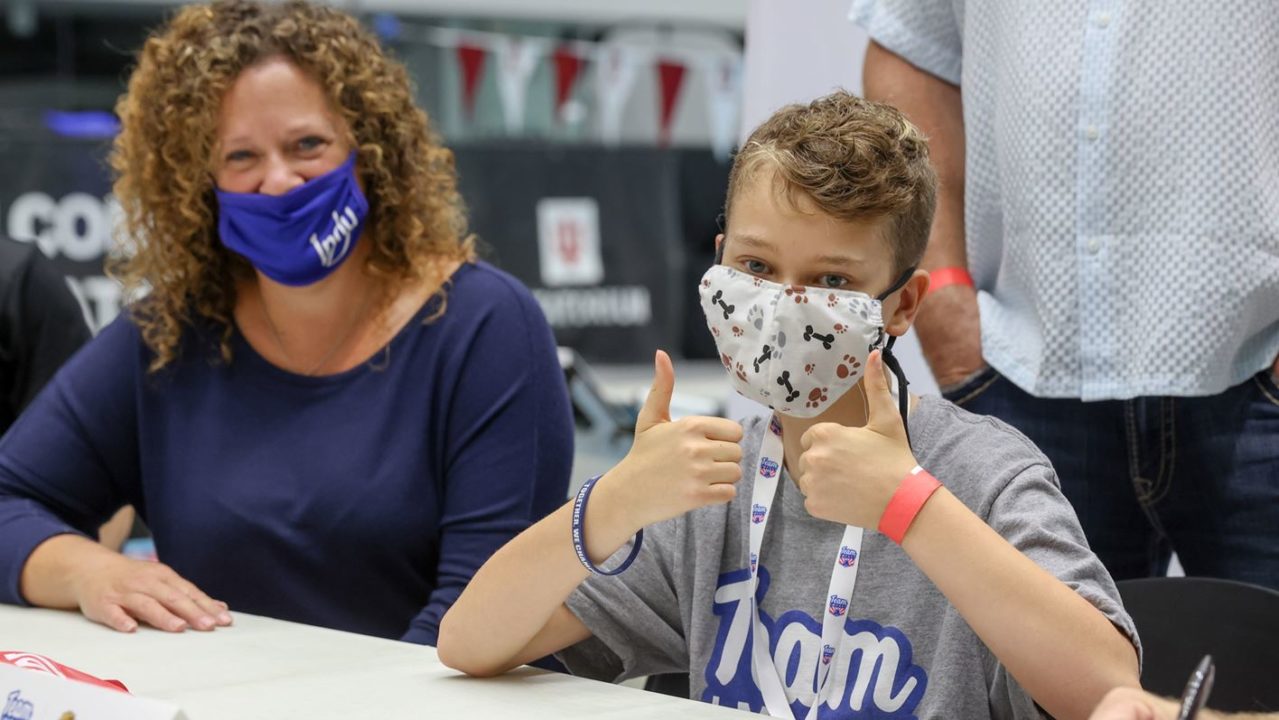 Elder joined the men's program as part of a partnership with Team IMPACT, an organization that matches kids battling illnesses to college programs. Current photo via Justin Casterline/IUPUI Athletics

Elder, who has been meeting with the men’s team for the last several months virtually, was finally able to meet the team in person before signing his letter. The 12-year-old was able to tour the Natatorium before making a trip up to the 10-meter platform.

After coming down from the platform, Elder signed his letter of intent with his mom Paula, Coach Dennis, Coach Barnes and the entire men’s swimming and diving program watching.

“It’s been since April that we have been building this relationship with Carter,” said Dennis. “To see him on the pool deck and see him join the team was really exciting and we look forward to continuing to have Carter has part of our team in the future.”

“Today, after several months of online zoom meetings, we were finally able to welcome Carter on campus to sign his NLI and officially become a Jaguar!” said Barnes. “We know that he will make a big impact on our program the lives of his new teammates. We hope to do the same for him and his family as we start our relationship.

Elder, a seventh-grader, suffers from a rare Chromosome 16 duplication that has also seen him have to deal with GI issues such as GERD, reflux and gastritis. His GI issues mean he does not have a desire to eat and has to eat five pureed meals per day while going through feeding therapy.

Elder also has un-lateral hearing after his cochlea in his right ear did not develop and hypotonia, which is low muscle tone that causes gross and fine motor challenges. The abnormal ear anatomy led to six battles with meningitis since 2017 and three surgeries to stop bacteria from his ear to getting to his spinal fluid.

He also struggles with Non-Verbal Learning Disorder that causes social challenges and difficulty understanding non-verbal communication, something his mom has hoped Team IMPACT will help Carter with.

“Carter enjoys dogs, especially the family mini golden doodle, the NFL, NASCAR, Star Wars and scouts,” said his mom. “He is very compassionate to others, determined, funny and has an impeccable memory for sports statistics. I am very exciting to watch him build on the relationships he has made with the team while improving his social skills and overall confidence.”

Elder’s experience has been different from normal Team IMPACT experiences as all of the communication before his signing day was done virtually due to COVID-19 restrictions. But that hasn’t stopped the team from getting to know their newest teammate. Senior Tommy Lombardo has been one of the leaders of meetings between the team and Carter.

“It’s been really fun working with Carter, he is a really fun kid,” said Lombardo. “He is really in to football so it has been to get the guys to talk with him about that and also introduce him to a lot of swimming stuff. One day he actually came in with a quiz about swimming and diving for us, which was a lot of fun.”