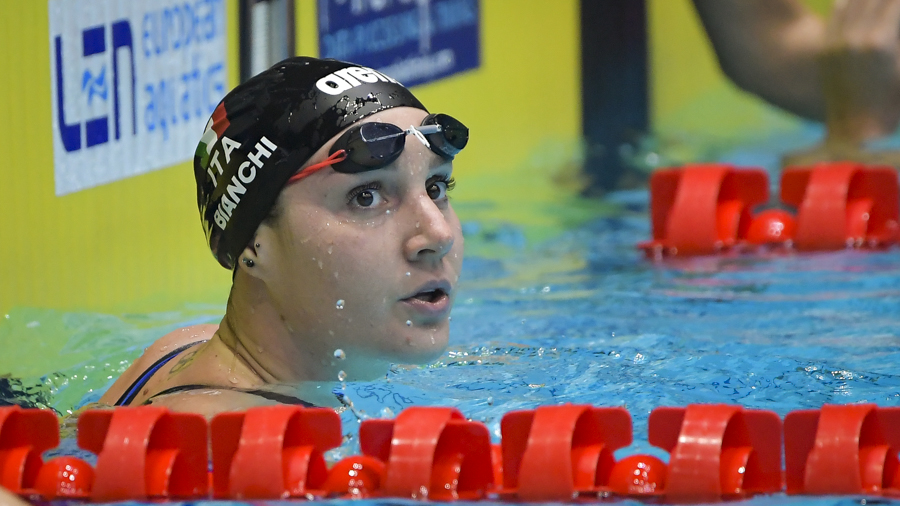 Italy grabbed gold on both the men's and women's sides in the medley relay, helping further the nation's lead in the overall swimming medal table. Archive photo via Andrea Staccioli / Deepbluemedia / Insidefoto

Winning the first event of the night decisively on day 4 of these 2022 Mediterranean Games was Lisa Angiolini of Italy.

Taking on the women’s 50m breast, Angiolini represented the only athlete in the field to dip under the 31-second threshold, establishing a new championship record en route to gold.

Posting 30.87 for the win, Angiolini’s time overtook the previous meet record of 31.07 held by another Italian, Arianna Castiglioni from 2018.

Portugal’s Ana Rodrigues posted 31.31 as the runner-up this evening while Angiolini’s teammate Anita Bottazzo rounded out the top 3 in 31.41.

Kristian Gkolomeev of Greece fired off a time of 21.91 to take tonight’s 50m freestyle gold, hitting the only mark of the pack under 22 seconds. He successfully defended his title from the 2018 edition of these Games, although his time 4 years ago was quicker at 21.66.

Gkolomeev is coming off of the World Championsips where the 28-year-old speedster took 8th in the 50m free final in a time of 21.89, just .02 off of what he clocked here.

As the silver medalist here in Oran, Miguel De Almeida Silva posted a new Portuguese national record with his 22.01 outing. Silva’s personal best overtook the previous Portuguese standard of 22.16, a time Miguel Nascimiento put on the books in 2020.

Also landing on this men’s 50m free podium was Oussama Sahnoune of Algeria, posting 22.22. That’s a downgrade from 2018 when he snagged the silver in 21.96. He owns the national record with his lifetime best of 21.81 from the 2018 Arab Open Swimming Championships.

Doubling up on her 200m fly victory already here, Bosnian & Herzegovinian Lana Pudar got it done for gold in this women’s 100m fly in a new championships record effort.

Posting a time of 57.55, Pudar defeated the field by over a second, with tonight’s silver medalist Anna Ntountounaki of Greece getting to the wall in 58.56.

Ilaria Bianchi checked in with a time of 59.06 to also land on the podium.

Pudar placed 8th in this women’s 1fly in Budapest but the 16-year-old is set to compete at the European Junior Championships which start tomorrow in Romania.

Franceschi led through the first two legs but Gunes turned it on during the breaststroke to out split Franceschi 36.46 to 38.29.

While Franceschi is a new gold medalist from 2018, Gunes repeats as the silver medalist from the last edition of these Games, although her time tonight was quicker than the 2:13.19 she put up there in Tarragona, Spain.

Gunes’ teammate of Deniz Ertan snagged her 3rd individual medal of this meet after having earned silver in the 800m free and 400m IM earlier in the competition.

Italy topped this men’s 200m fly, courtesy of Claudio Faraci‘s time of 1:57.09. Entering this meet, Faraci had been as fast as 1:58.01 from 2 years ago but here the Italian easily beat that with the first 1:57-range effort of his career.

Following suit in snagging a best time was former NC State swimmer Andreas Vazaios of Greece. The bronze medalist from Tarragona upgraded to silver this time, posting 1:57.92, while national record holder Jaouad Syoud of Algeria earned his 2nd medal of the night in 1:58.37 for bronze.

Italy was victorious in this women’s 4x100m medley relay, as the combination of Carlotta Zofkova Costa, Lisa Angiolini, Ilaria Bianchi and Sofia Morini earned a time of 4:04.65 to beat the field by well over a second.

The next closest team was France who checked in with silver in 3:36.03 while Turkey also got on the podium in 3:36.29 for bronze.

Sara Franceschi is Italian not French

Vazaios used to for NC State, not Indiana