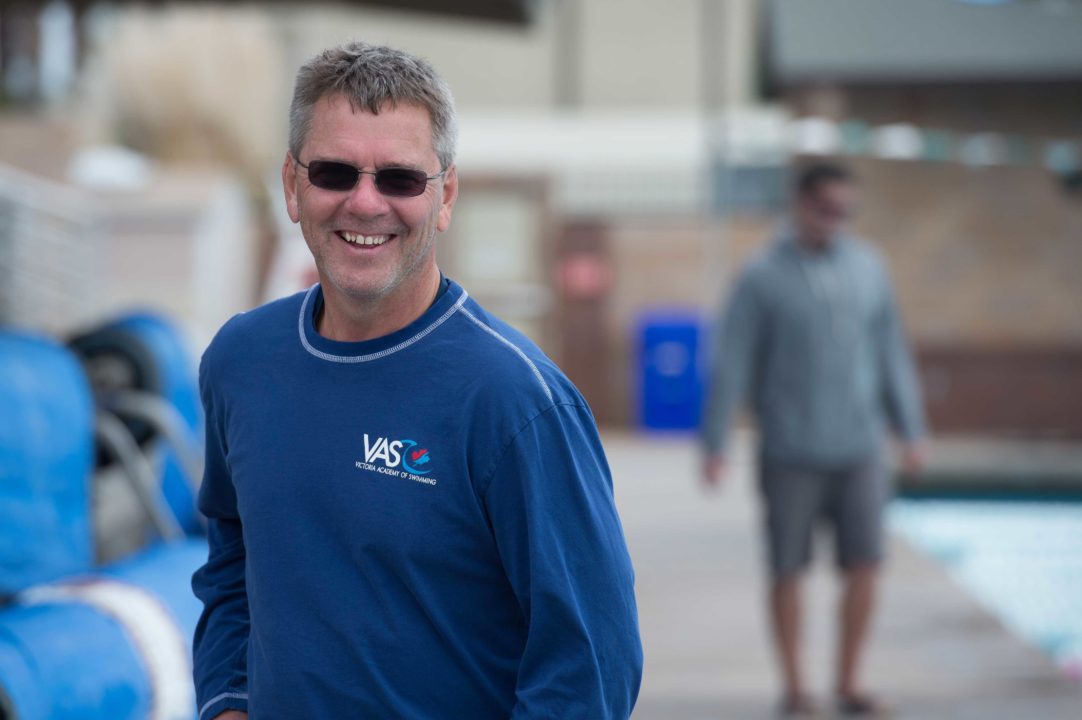 Randy Bennett, the head coach of Island Swimming and the Swimming Canada High Performance Centre in Victoria, has been admitted to a hospital with serious health concerns. Archive photo via Mike Lewis/Ola Vista Photography

VICTORIA – Longtime Team Canada swimming coach Randy Bennett has been admitted to hospital in Victoria due to serious health concerns.

The High Performance Centre – Victoria head coach and director of Island Swimming has been diagnosed with lung cancer after undergoing a battery of tests in recent weeks. He is expected to begin radiation therapy this week.

“It’s been a month of working through the diagnosis, now we’re actively seeking early treatments,” said national team physician Steve Keeler. “It’s come on quite suddenly. People associate lung cancer with bad habits, but that’s not the case at all. There’s a small subset of people who develop lung cancer who aren’t smokers. Randy has been diagnosed with a malignancy that’s going to require in-hospital care for the foreseeable future. It will involve both radiotherapy and chemotherapy.”

Keeler has been acting as Bennett’s primary physician throughout this situation, working alongside a team of specialists.

“I’m impressed with how he’s managing this,” Keeler said. “I sat with him for two hours Saturday night watching hockey, sharing some stories and lots of smiles. He’s most concerned about family, friends and his athletes. If he responds well to the first round of treatment we anticipate he’ll be back in his normal role in the swimming community as a parent and coach within the next couple of months.”

“I think it’s important people realize I’m not lying in bed curled up in a ball. I am OK. It is what it is. You deal with it. I’m not rolling over. My expectation is that I’m going to get through this,” said Bennett, who has two teenage sons, Brett and Kyle, with his wife Lesley.

Bennett said his primary concern is for his athletes as they prepare for Team Canada Trials in April, where they hope to secure spots to represent Canada at this summer’s Pan American Games in Toronto and FINA World Championships in Kazan, Russia.

“Their performances are the priority and I expect them to prepare as normal. They are very aware what they need to do to achieve the goals in front of them. They’re capable of achieving those, we expect them to be working towards it and we trust the people that are in place taking care of them.”

HPC-Victoria Assistant Coach Ryan Mallette is overseeing the senior group, which is at a training camp in Arizona. A strong support team including Swimming Canada IST Director Dr. Allan Wrigley remains in place around the swimmers.

“One of the reasons that we have great success in Victoria is the outstanding staff that I have there. I have complete faith in everybody to move the program along in my absence,” Bennett said.

Swimming Canada CEO Ahmed El-Awadi echoed his support for the athletes, as well as for Bennett personally.

“It will be a tough road ahead for him but he has the strong will and determination to get through this. He’s dealing with a difficult situation but he’s still thinking like a great coach. His main concern to me was that the athletes were taken care of,” El-Awadi said. “We are confident that our High Performance Director John Atkinson and IST Director Dr. Allan Wrigley will ensure this with the local staff. I gave Randy my personal guarantee that the athletes will get whatever they need.”

“We will also support Randy in any way we can to make sure he has the best treatment possible.”

“Our first concern is for Randy, his health and his family. His children are members of our club, and they, too, are in our thoughts,” Burton said. “At the same time, it is a testament to Randy’s leadership that he has left us in a strong position to continue our programming during his absence. Nothing has changed for the board, staff or our swimmers. We look forward to his return.”

Anyone wishing to send a message to Randy may do so via:

Above is a press release from Swimming Canada

Our family would like to extend our best wishes to Coach Randy Bennett and his family at this very trying time. Coach Bennett is a tremendous leader in the Canadian swimming community.

2015 is off to a difficult beginning for the Canadian swimming community with this discouraging news combined with the recent health challenges of another long time Team Canada member Sinead Russell. We extend our positive thoughts to you both as you face your challenges and we all very much look forward to your successful return to normal family life and then a triumphant return to the pool deck.

Hey Randy. Best wishes from the Buna family. Beat for me. Michael, Joan, Ryan and Britt