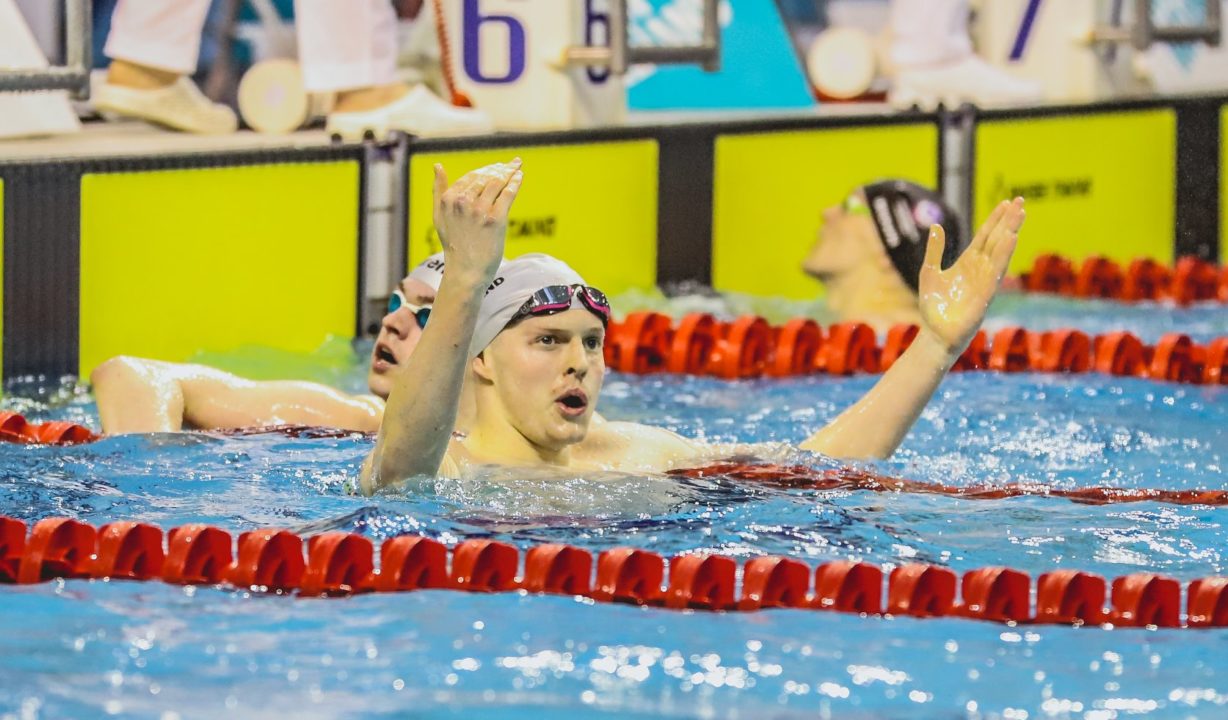 Brendan Hyland hit a new personal best in the men's 200m fly while competing at the 2019 FINA World Championships, keeping on trend with the nation. Archive photo via David Kibern

The nation of Ireland continues to rack up the records as the 2019 swimming season rolls on. Swimmers representing the country competed at the European Junior Swimming Championships, European Youth Olympic Festival, FINA World Championships, and the Irish Summer Nationals, making history for Ireland along the way.

For instance, at the European Junior Swimming Championships, 48% of swimmers achieved lifetime bests in Olympic events compared to 23% at the same competition last year. A total of 6 Irish Junior Records were re-written in Kazan as well, with the nation seeing swimmers appear in 5 semi-finals and 2 finals over the course of the Championships.

At the EYOF, 75% of the Irish swimmers competing achieved lifetime best in Olympic events, compared to just 37% back in 2017. The nation brought home 2 medals in the form of Molly Mayne‘s 3rd place finishes in both the 100m and 200m breaststroke events.

On the senior circuit, 43% of Irish swimmers that competed at the FINA World Championships in Gwangju produced lifetime bests in Olympic events, representing a massive increase from just 8% in 2017. A total of 7 Senior Irish National Records were registered, with Darragh Greene and Brendan Hyland each making the sem-finals in their respective events of the 50m breast and 200m fly.

Shane Ryan also advanced to the semi-finals in the men’s 50m back but withdrew to focus on the medley relay.

Unfortunately for ireland a small minority of swimmers being brought to competitions like EYOF are actually born or live in Ireland. There’s been more and more hostility between irish born and Irish living swimmers that are increasing frustrated by swimmers from Australia the UK America and Hamilton taking spots from irish born and living swimmers. Molly mentioned in the article had never been heard of or seen at an irish gala until she was announced for EYOF so although all seems well on paper the youth development in Ireland isn’t there we are simply picking anyone with irish blood to represent us even if we have youth swimmers who have qualified for these galas

“Taking spots” seems generous in most cases. It’s not like Ireland has many good swimmers that can qualify or do anything at the highest level

True for seniors but people like the girl from otter in the 50 fly who would’ve come fourth with her pb at EYOF we’re not selected while people who live in the UK and train with Hamilton are selected and can barely makes semis. What are irish kids supposed to think it appears you can only swim for an Irish junior team if you don’t live in Ireland

The girl from otter is too old to be eligible for EYOF and if she was prominent in an Olympic event she would be considered, there are no form 50s at EYOF….. just saying….

First of all, 50 fly isn’t an Olympic event and it is clear swim Ireland want swimmers to focus on the Olympic events as evidence by having no entrants at European juniors even though there were final and possible medals to be won. Secondly, only three of the athletes on teams this year trained abroad. Out of what, 20 athletes? It’s absurd that the notion Irish kids will be disheartened by the success of others is being spread. If anything it gives younger swimmers inspiration and something to aim for.

7
-2
Reply
Swim Will
Reply to  Notevenfunny

Are you suggesting that Ireland should have tried to select a swimmer for the EYOF who is too old for the competition and also select them for an event that isn’t on the EYOF programme when they get there? Unreal

Molly has never competed for another nation and has been at the last two national championships. Other athletes are not being considered because they are not fast enough, qualifying standards are what they are, just because your slow doesn’t mean you should be picked. Having better athletes compete raises the standard for the youth athletes in each event and aids event progression. You sound like a frustrated parent

Have to admit, I’ve seen a few names on Irish teams in the past 12 months and had to double take because I’ve been convinced swimmers named werent Irish having met them personally. Rules are rules though – If people qualify on paper, they’re allowed to swim for Ireland.

Exactly just like when Sir Mo runs for GB,

Are you suggesting that an accent and a persons personality is the credentials to be Irish?

The first reason why there were less athletes brought was that the QT times were faster this year. Molly has been to the past two championships and is only what, 14? It’s not as if she’s had the chance to go to an international meet before. In addition, 1/6 Irish people live abroad; are they not considered Irish then and shouldn’t be allowed to compete even if they EARN their spot on the team and go on to win medals. The notion that just because an athlete lives abroad does not make them any less Irish. This could be because their parents found work someplace else which is obviously not a choice the swimmer made. Fast swimming is fast swimming… Read more »

I don’t believe that the max capacity stated in the qualification booklet of any of the teams Hamilton swimmers qualified for were met so saying they ‘took’ spots isn’t true.

Not saying I totally agree with this whole thing but I have to say for seniors I totally agree the best of the best should be picked that are eligible. I do however have to say since Rudd has come in there are 10s of swimmers that I and other swimmers on deck simply haven’t heard of that pop up and are appearing at irish nationals for the first time such as the guy who won the 400im. I think saying they are taking spots is harsh but I can understand if younger swimmers are frustrated seeing swimmers they haven’t heard of or ever seen in Ireland going to competitons for ireland. For the overall development of youth swimming in… Read more »

7
-5
Reply
Swim Will
Reply to  Notevenfunny

Hi NOTEVENFUNNY. Perhaps you can let us know which swimmers had their spots ‘taken’ by someone else? Which swimmers in 2019 achieved a time at the Trials to get on to an Irish team but were left behind? Thanks

Sorry? Must have been a different Molly Mayne that has competed at Irish Summer Nationals for the last 2 years. Please get your facts right when referring to a young girl who has done absolutely nothing wrong.

Not having none of that who checked these stats? Hyland and Green were only best times at the worlds meet in Olympic events where Coulter, Coyne, Ryan, Wlashe did not set best times in there event.