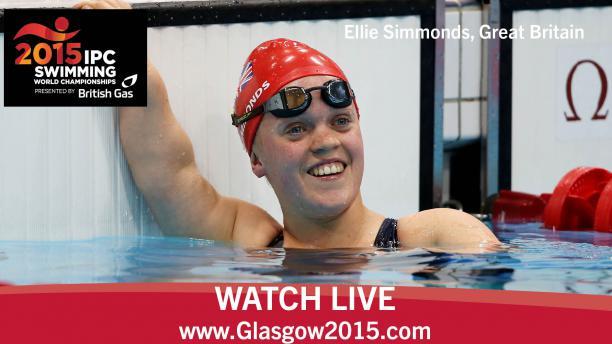 IPC Swimming has announced that all seven days of action from the 2015 World Championships in Glasgow, Great Britain, will be shown live from 13-19 July. Current photo via IPC Swimming

IPC Swimming has announced that all seven days of action from the 2015 World Championships in Glasgow, Great Britain, will be shown live at www.Glasgow2015.com from 13-19 July.

The final competition schedule has also been published at www.Glasgow2015.com following the close of final entries. Heats will begin at 10:00 (GMT) each day whilst finals will start at 18:00 (GMT). Over 580 athletes from nearly 70 countries are set to line-up, including World Championships debuts for swimmers from Cameroon, Gambia, Barbados, Mongolia, Nepal, and Malta, as the competition will act as a major qualification opportunity for Rio 2016.

Commentating on the livestream will be 15-time Paralympic medallist Paul Noble, who has voiced swimming at Paralympic Games and World Championships. Noble will be assisted by a variety of colour commentators.

Craig Spence, IPC Director of Media and Communications, said that whilst fans around the world can watch the livestream at Glasgow2015.com, the opportunity to watch another major para-sport event on British shores in person is also too good to miss:

“We are delighted to be showing every single minute of action from Glasgow 2015 live online. The competition is expected to be intense and fierce with the world’s best swimmers not only trying to win world titles but also places for their country at Rio 2016.

“Whilst the livestream, with the excellent commentary of Paul Noble, will provide comprehensive coverage of the event, tickets for Glasgow 2015 are still available and there is no better way to experience the excitement of para-swimming than attending in person.

“The atmosphere at Tollcross during last year’s Commonwealth Games was sensational, and if we can experience that superb level of support again then I am confident that Glasgow 2015 will be the best para-swimming World Championships ever.”

The opening day of competition on 13 July will feature a potential five gold medals for British swimmers, whilst all days are packed with para-swimming’s greatest rivalries and personalities.

The USA’s Brad Snyder will return to major international competition after winning gold in the men’s 400m freestyle S11 at London 2012, on the anniversary of losing his eyesight in Afghanistan.

Fellow US swimmer, 19-time world champion Jessica Long will look to add to her medal collection in women’s S8 events, and Ukraine’s Dmytro Vynohradets will attempt to retain his seven S3 titles from the 2013 edition.

The most decorated athlete from London 2012, Australian Jacqueline Freney, makes an exciting return in the women’s S7 for her first major competition in three years.

Brazilian triple Paralympic champion Andre Brasil is in Glasgow on the road to his home Paralympic Games in the men’s S10. But his teammate Phelipe Rodrigues has registered world leading times in two of the three of Brasil’s gold medal-winning events from 2013.

Fans will remember the jubilant celebrations of Chinese ‘armless swimmer’ Tao Zheng from London 2012 and could be treated to another display of dominance in the men’s 100m backstroke S6.

Media accreditation for Glasgow 2015 is still available. The livestream may be blocked in some territories.