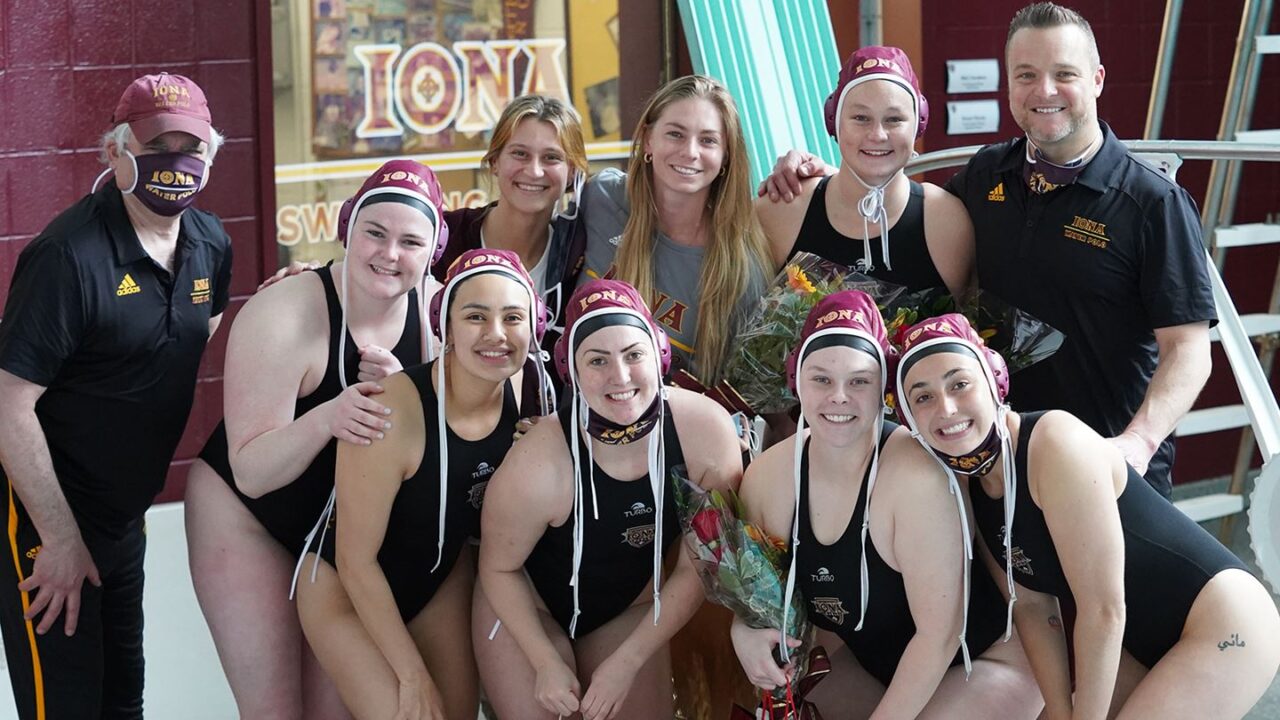 Despite their starting goalie and top scorer forced to the bench in the second half, the Iona women's team held on for a 11-8 Senior Day win over Siena. Current photo via Geraldo Rodriguez / ICGaels.com

NEW ROCHELLE, NY – Even with their starting goalie and leading scorer forced to the bench in the second half, the Iona women’s water polo team held on for a 11-8 Senior Day win over Siena College in a Metro Atlantic Conference contest at Hynes Pool this afternoon. Prior to the match, the Gaels honored graduating seniors Aubree Fuher, Danielle Hernandez, Laura Rockett, Kate Schmitt, Carli Tovar, Jordan van Reeken and Erika Wimmer.Rocket led Iona with four scores, while junior Maeve Ellen Wydan and Carli Tovar added two each. Hernandez, Mia Tovar and freshman Kaya Hart had one goal apiece. The Gaels scored eleven goals on 32 shots on goal and made seven assists.In goal, junior Cristina Chiappini, last week’s MAAC Defensive Player of the Week, had four saves on ten Siena shots with four goals against, while Schmitt made four saves, including stopping a five-meter penalty shot, on nine Siena shots and had four goals against. On defense, Iona had six steals with three by Rockett. The Gaels drew five Saints kickouts with three by Hernandez and were ejected four times. Wydan was disqualified at the end of the third period. The Maroon & Gold scored on two of five man-up chances, while Siena capitalized on three of five.

With 2:26 gone in the match, Wydan got Iona on the board first, but Siena answered on its next possession for a 1-1 tie with 5:06 remaining in the opening period. Hernandez put the Gaels up by one 2-1 at the 3:41 mark, followed by Rockett to increase Iona’s edge to 3-1 with 2:34 left. With only two ticks on the clock, the visitors pulled within one 3-2 going into the second quarter.Carli Tovar’s score with 2:08 gone in the second period upped the Maroon & Gold’s lead back to two 4-2. Rockett hit her second goal with 2:19 left to give the Gaels a 5-2 lead, but the Saints scored 41 seconds later to pull back within two 5-3. With 31 seconds remaining, Wydan’s second score gave the Gaels a three-goal 6-3 advantage at the halftime break.Just 2:38 into the third period, Siena pulled back within two 6-4, but 28 seconds later, Carli Tovar put Iona back up three 7-4. After Chiappini was forced to leave with an injury, Schmidt replaced her in goal at the 2:29 mark, two straight Saints scores got the visitors with one 7-6 with 33 seconds remaining. Twenty seconds later, Rockett’s third goal restored the home team’s two-goal edge 8-6 going into the final period.With 3:12 gone in the fourth quarter, sophomore Mia Tovar, followed by Rockett’s fourth score 37 ticks later, gave the Maroon & Gold a four-goal cushion 10-6 with 4:11 left. On their next trip down the pool, the Saints got back within three 10-7, then Hart scored her first Gael goal 40 ticks later for a 11-7 home edge at the 3:10 mark.   Siena scored with 1:22 left as Iona held on for the win.

Iona head coach Brian Kelly praised his squad’s performance against a “physical” Siena team, and Schmidt’s “amazing” goaltending. “I was really happy with how the team handled Siena’s physicality,” Kelly said. “We knew we were going to get a physical game with them on our Senior Day.  We seemed to get that big goal every time we needed it to distance ourselves every time Siena cut into our lead.” “We had an amazing and gutsy performance from senior utility Kate Schmidt who stepped up and played goalie for the first time in her career for an injured Cristina Chiappini.” Iona former assistant coach Alex Williams, now Siena head coach, faced his “mentor” Iona head coach Brian Kelly for the first time this afternoon and welcomed the “opportunity” to face the Gaels.“We are grateful to have this opportunity to play despite these times and even more special to play against my mentor Brian Kelly,” Williams said.  “I can always count on a hard-fought match with him and am happy to embrace any opportunity to play with him.”

On Sunday, April 18, the Gaels travel to Philadelphia for a 11 a.m. match at La Salle University and a 4 p.m. match at Villanova University.

Continuing a four-game road trip and taking on its first ranked opponent of the 2021 season, Siena Water Polo (0-3) battled #24 Iona (2-0) to the end at the Hynes Center Pool on Saturday afternoon. The Saints fell, 11-8, to their MAAC rivals in the first of two scheduled meetings between the teams this season.

The Gaels got on the board first in the match and held a 3-2 lead at the end of the first quarter, with senior Kristen Burger and junior Georgia Vargas getting on the board in the opening period for the Saints. Iona held a 6-3 lead at the half, with sophomore Grace Boeve netting the lone Siena goal in the second quarter.

Iona’s Laura Rockett, who recorded a four-goal day to lead the home team offensively, distanced the Gaels with a score just 20 seconds later, and Iona held on with three more goals to Siena’s two in the final period. Vargas ended the game with a pair of scores, while Junior Bianca Prinsloo also netted a goal. Sophomore Anna Mossakowski recorded a season high 11 saves and added a steal in-between-the-pipes during the loss.

Siena will wrap up a four-game road trip in search of its first win of the season next weekend, when the Saints head south to the Philadelphia area to face conference foes Villanova and La Salle.