Interviews with Winners, Day 1 at 2014 Arena Grand Prix in Orlando 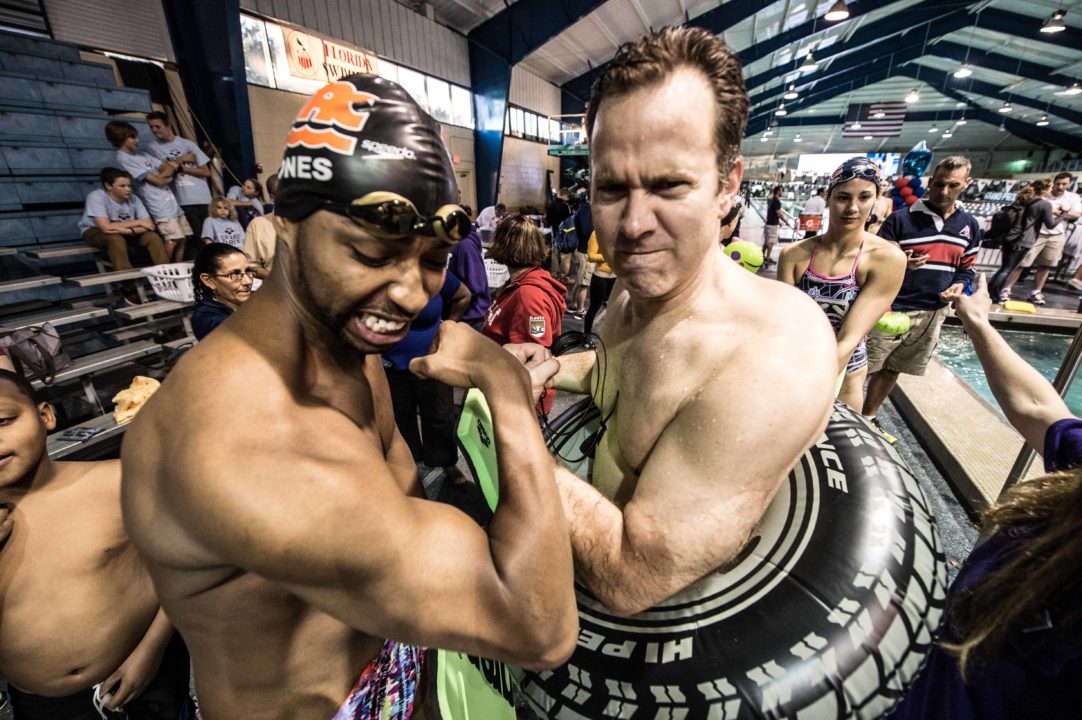 To no surprise, Hungary’s Katinka Hosszu started out her 2014 U.S. Grand Prix adventure with a runaway victory. What might have been a little surprising is that her finals time was about a half-second slower than what she went this morning. Hosszu is limited by the Grand Prix’s rules and able to swim only 7 events over the weekend,  a far cry from her usual packed schedules. That led to some speculation that perhaps we’d see her blow up events at finals with the extra rest. That theory will need plenty more observation to support it, but this finals 200 free also makes one wonder if there will be an adjustment period for the Iron Lady – she might need a few competitions to get used the extra time between events in the more limited schedule.

Nonetheless, both of her 200s today were under the old meet record, with her prelims 1:57.60 officially taking the record moving forward. Second in this race was her country-woman Agnes Mutina, who went 2:00.50 – that barely touched out American Chloe Sutton, who had a nice swim in 2:00.61.

Another American star, Megan Romano, was fourth in another two-double-oh (2:00.98) and fifth place was 14-year-old Courtney Harnish of York YMCA.

The B final wen to Gator Swim Club’s Andreina Pinto, who cut more than three seconds off her morning swim to go 2:01.14.

While the women’s edition of this race was a relative blowout, the men’s was decided by the narrowest of margins. Top seed Yannick Lebherz of Germany swam a solid, patient race, but had to weather an intense charge from former Wisconsin collegiate star Michael Weiss. The two were separated by just .06 at the 100 mark, and Weiss cut that lead down to .04 at the finish, but still wasn’t able to get past the German. Lebherz took home the $500 first-place prize money with a 1:50.27, while Weiss took second in 1:50.31.

16-year-old Dutchman Dion Dreesens took home third, just a breath behind the leaders in 1:50.77 before Canada’s Ryan Cochrane and South Africa’s Darian Townsend came in right behind. This was a very foreigner-heavy event, especially with top American Tyler Clary scratching out of finals.

The B final continued that trend, with Daniele Tirabassi (Venezuela), Andres Olvera Alejos(Mexico) and Andres Doria (Venezuela) dueling for the win before finishing in that order.

A tightly-bunched top 4 coming out of the preliminaries turned into a tight group of three trailing Jamaica’s Alia Atkinson. The Olympian cruised out to an early lead, going 1:07.15 to take the event, looking smooth and powerful the whole way. Blue Fish pro and former Texas star Laura Sogar was second (1:09.00) followed by a pair of SwimMAC-ers, Katie Meili (1:10.00) andMicah Lawrence (1:10.04).

A pair of athletes from T2 followed them up – they were Justine Mueller and Ashley Wolter. The youngest A-finalist, 17-year-old Hungarian Fanni Ferenczi, took 7th.

The B final went to German Theresa Michalak, who has been training with the Florida Gators in Gainesville. Michalak is a high-profile signee with the Gators, and though her current eligibility is still uncertain, her 1:11.84 (only a second or so off her best) had to be a good sign for Florida coach Gregg Troy, whether she starts competing with the Gators this post-season or further down the road.

The men’s breaststroke was one of the tightest races of the night. Mike Alexandrov and Brazil’s Felipe Lima went shoulder-to-shoulder the entire way, with the race coming down to who could time their finish better. Both seemed to come into the wall just a bit oddly – Alexandrov elected to take one short stroke into the finish while Lima lengthened out his glide instead of taking another stroke. It was Alexandrov’s quickness that won out as he touched the wall first in 1:01.71 to Lima’s 1:01.85.

Tennessee post-grad Brad Craig pulled another half second off his prelims time to take the final money-earning spot in 1:02.68. He had to fight off Alexandrov’s Trojan teammate Azad Al-Barazi for the spot though; Al-Barazi was 1:02.85.

The B heat went to Melquides Alvarez Caraballo of Spain in 1:03.74. That nipped Canadian Andrew Poznikoff by two tenths. After them was former Louisville Cardinal Carlos Almeida and 14-year-old pro Michael Andrew, who went 1:04.47, a little more than a half-second off his own NAG record.

Canadian Katerine Savard continued her domination from the prelims, finished as the only butterflyer under 59 for the second time today. Savard went 58.50, a few tenths faster than her dominant prelims effort, to take the win. Fellow Canadian Audrey Lacroix took second in 59.27, moving up to pass American Olympian Claire Donahue, who took third in 59.60.

Fourth was 15-year-old Lauren Case of Chattahoochee. She dropped nearly another second to go 1:00.37, ahead of a pair of big names: Amanda Kendall, coming out of retirement with T2 Aquatics, and SwimMAC’s Arianna Vanderpool-Wallace.

18-year-old Sara Joo, another member of a tough Hungarian contingent at this meet, won the B final in 1:02.06, touching out another Hungarian, Eszter Darra by just .11.

The men’s 100 fly featured several battles between youth and experience. At the very top, 27-year-old Albert Subirats dueled with high schooler Joseph Schooling for the win. Subirats, a Venezuelan national who represents Auburn, topped the Texas commit from the Bolles School, with Subirats going 53.43 and Schooling putting up a 53.69.

Fellow 18-year-old Luis Martinez was third in 54.58 before another showdown – 25-year-old Adam Brown, who represents New York Athletic Club, topped 16-year-old Zuhayr Pigot 55.16 to 55.17, and another elder statesman, 28-year-old Hungarian Krisztian Takacs, was just a few hundredths back at 55.21.

A tight battle at the top of the B final saw Brazilian Luiz Pedro Ribeiro Pereira knock off Canada’s Evan White 55.02 to 55.09.

Katinka Hosszu returned from what must have felt like a never-ending mid-meet break for her to thoroughly dominate the 400 IM, going 4:39.85. That’s a full second off what she went at prelims, her second swim tonight that has been a touch off her morning efforts. That could suggest some jet lag for Hosszu, who was in Luxembourg less than a week ago swimming the Euro meet. That’s a 6-hour time difference from Orlando, Florida.

Florida high schooler Vien Nguyen took second place. The 17-year-old, who is Vietnamese, went 4:41.68. That was well ahead of the top American in the race, Caitlin Leverenz. The former Cal Bear went 4:44.94 to take home third place in a field that got very spaced out at the top. The next finisher was five seconds back: 16-year-old Sydeney Pickrem of Clearwater Aquatics.

Gator Swim Clubber Andreina Pinto powered away with the B final win, going 4:51.38 to touch first by nearly 6 seconds.

Hungary swept the 400 IMs as 25-year-old David Verraszto hacked another 4 seconds off his prelims swim to not only win, but move from 10th to 3rd overall in the world this year. His 4:16.03 crushed the field and sits behind only a pair of Japanese swimmers (Kosuke Hagino and Daiya Seto) in the 2014 world rankings.

Tyler Clary out of Club Wolverine came in second. His 4:20.70 was right about where Verraszto was this morning, and should rank him within the top 15 in the world as well. He leapfrogged Wisconsin’s Michael Weiss at finals, with Weiss finishing third in 4:23.67.

Germany won the men’s 400 free relay for the second year in a row. The team went 3:29.63, well off their own meet record by still three seconds up on second place. Yannick Lebherz was 51.15 swimming second.

Mexico finished second in 3:32.44, powered by a 51.90 from anchor Alejandro Escudero Alvarez. Third was Columbia, just four-tenths behind in 3:32.80, leading two other teams within two-tenths: Azure Florida and Swim Ontario.