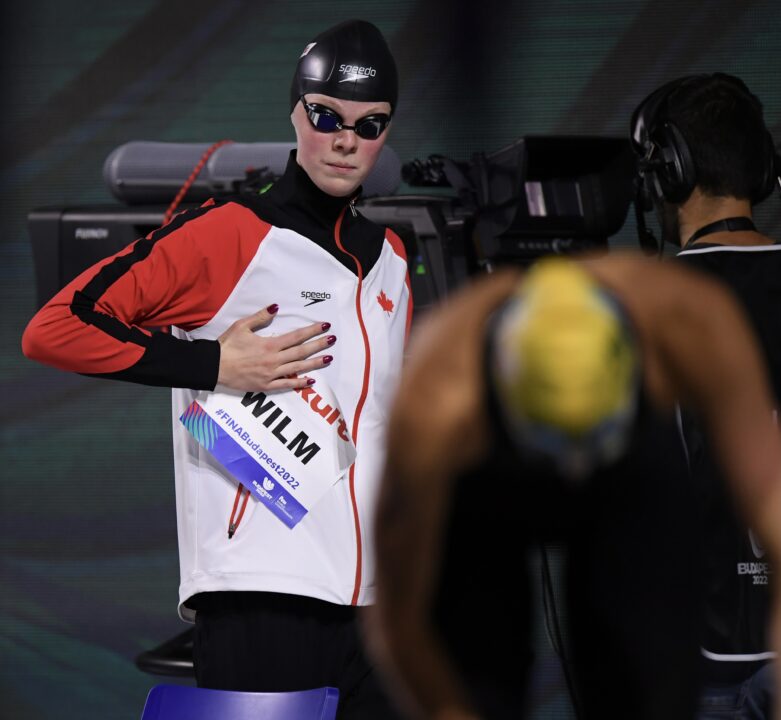 Wilm was one of three Calgary-based swimmers on the Canadian SC Worlds roster getting in a tuneup before the FINA World Cup in Toronto later this month. Current photo via Fabio Cetti

Several swimmers based in the Calgary area took to the MNP Community & Sport Centre on Saturday in the annual “UCSC Fall Start Up” meet hosted by the University of Calgary Swim Club.

Among those competing were three members of the Canadian roster for the upcoming Short Course World Championships in Melbourne: Ingrid Wilm, Rachel Nicol and Rebecca Smith. That trio will also race at the Toronto leg of the FINA World Cup later this month, as will Richie Stokes, who was also in action on Saturday.

Wilm, who really made a name for herself last year in the short course pool by lighting up the International Swimming League (ISL) season with multiple national records, raced the women’s 100 back on Saturday, clocking a time of 58.69.

The 24-year-old’s best time, which previously stood as the Canadian Record, is the 55.61 she produced last September during the ISL season.

The second-fastest swimmer in the women’s 100 back was Ella Varga, who neared her best time of 59.60 in 59.90. Varga was initially supposed to be in the midst of her freshman year at LSU, but is currently in the midst of rehabbing an injury at home while training with UCSC. The 18-year-old is expected to join the Tigers for the spring semester in the new year.

Smith, who played a pivotal role in helping the Canadian team to three relay gold medals at the 2021 Short Course World Championships in Abu Dhabi while also winning an individual silver medal in the 200 free, raced three individual events over the weekend.

Also making some noise at the meet was 16-year-old UCSC swimmer Aiden Norman, who has reportedly been making campus visits of late in the U.S. as he weighs his options of racing in the NCAA in a few years.

In August, Norman earned a sixth-place finish at the Junior Pan Pacific Championships in the boys’ 200 back, and also placed 11th in the 100 back.

Also racing at Junior Pan Pacs two months ago was fellow 16-year-old UCSC swimmer Paul Dardis, who had some strong swims on Saturday by clocking 50.46 in the 100 free and 1:52.34 in the 200 free. Both swims were sizeable lifetime bests, having previously been 51.18 and 1:54.84, respectively.