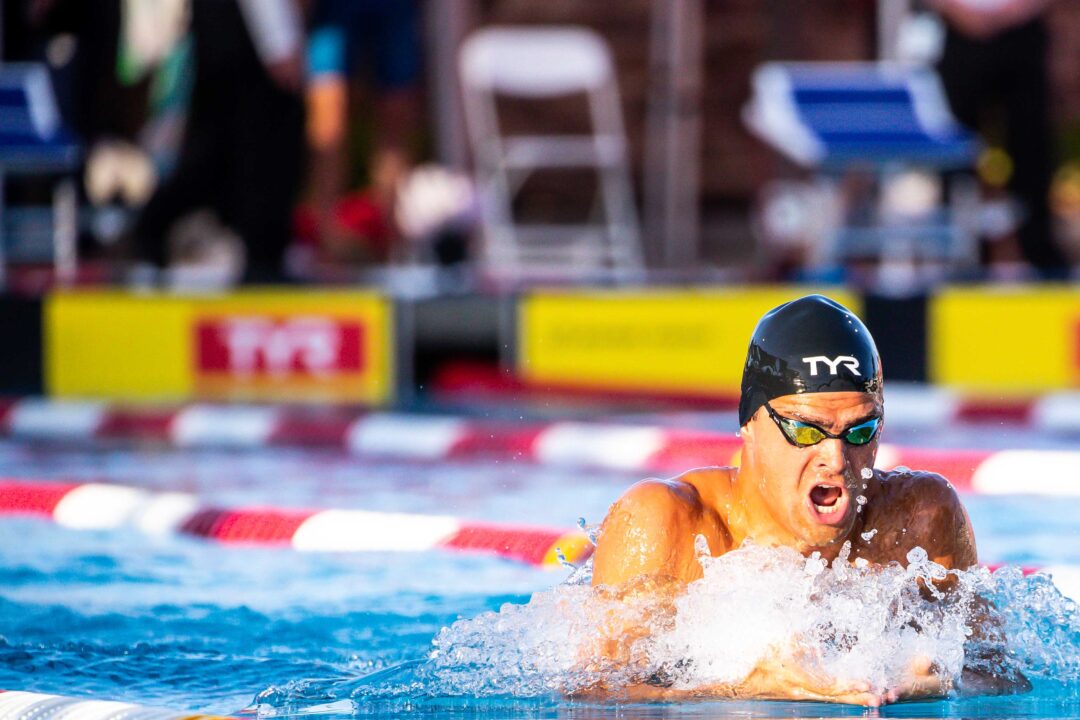 Michael Andrew roared to a new personal best in the men's 100 breast, securing the top seed for tonight's final with a 58.82.  Stock photo via Jack Spitser/Spitser Photography

The first prelims session of the final Pro Swim Series this year kicked off with a bang. Michael Andrew roared to a new personal best in the men’s 100 breast, securing the top seed for tonight’s final with a 58.82.

The swim marks a new PSS Record, and Andrew’s first time under 59 seconds in his career. Additionally, that makes Andrew the fastest American in the event this year, as well as the only American to go sub-59 this year, as we rapidly head towards the U.S. Olympic Trials. Andrew entered the meet with a lifetime best of 59.14, which he had swum back in March of 2020. The swim also marked Andrew’s first sub-1:00 of 2021.

Andrew’s improvement this morning came mostly from the 2nd 50, where he was 0.29 seconds faster than he swam for his previous lifetime best.

The previous Pro Swim Series record was held at 58.86, and was set by World Record-holder Adam Peaty from 2017. With the swim, Andrew not only broke an Adam Peaty record, he’s now also the #2 American all-time in the event, and has inched closer to the 58.64 American Record, held by Kevin Cordes.

Here is the current top 5 Americans in the 100 breast all-time:

Shifting to a global perspective, Andrew’s swim from this morning lands him 6th in the world this year.

He pulled an Andrew Wilson doing that in prelims!

.08 off the US open record and .18 off the American record could see something special tonight.