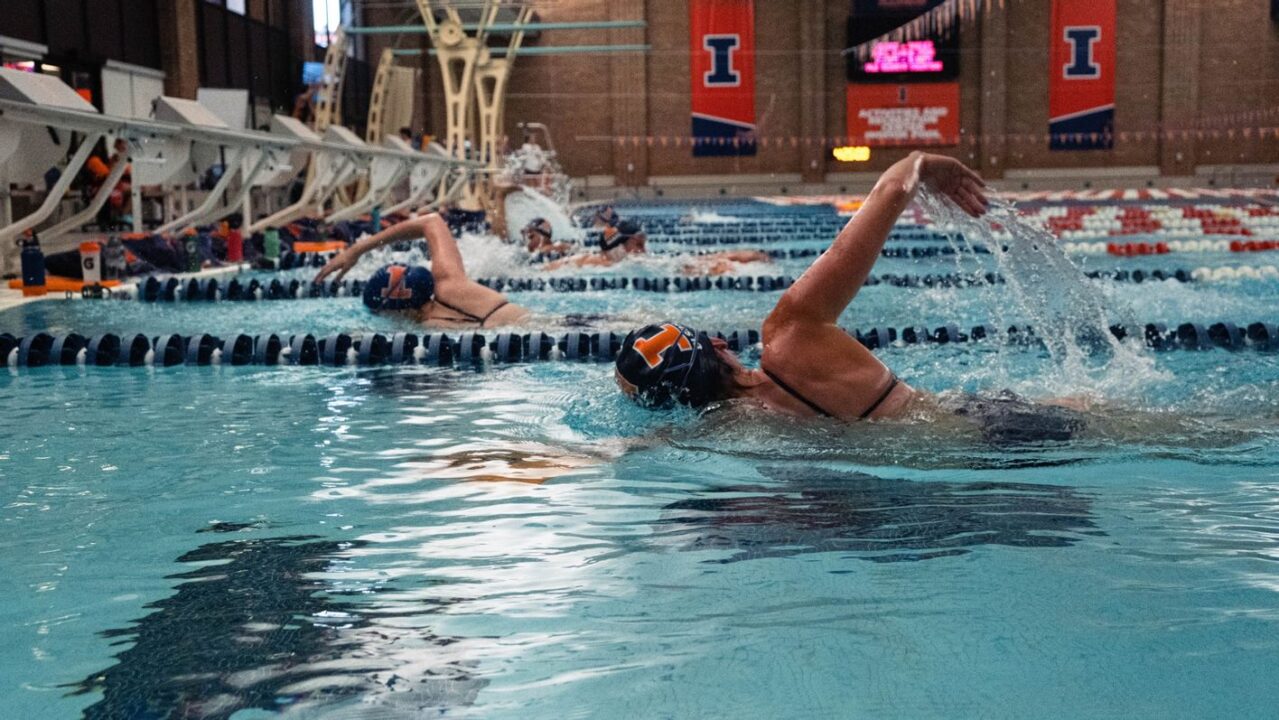 The Fighting Illini swimming and diving program announced a class of 11 new swim signees for the 2023-24 season. Stock photo via Illinois Athletics

CHAMPAIGN, Ill. – The Fighting Illini swimming and diving program announced a class of 11 new swim signees for the 2023-24 season. First year head coach Jeana Kempe brings in one of the biggest classes across all of Illinois Athletics.

“I am very excited to welcome these 11 young women into the program,” said Kempe. “As a staff, we have a clear vision on the women we want representing Illinois. As a group, we believe they will come in and immediately contribute in practice and competition. They are a great representation for where we are going as a program.”

All rankings are according to Swimcloud

Maggie Adler (Western Springs, Ill.) Loyola Township High School:
Maggie is a top-25 ranked Illinois recruit. She is a two-time IHSA sectional finalist and swam two personal-bests in the 100 (52.60) and 200 freestyle (1:53.01). She is a Hinsdale Swim Club team member and intends to major in General Health Sciences.

Kylee Sessions (Lansdowne, Va.) Riverside High School:
Kylee is a top-20 ranked recruit in the state of Virginia. She is a 2022 VHSL State Champion in the 100 breaststroke and a 2021 runner up in the 100 freestyle. She is a Nation’s Capital Swim Club – Vienna team member and intends to major in Criminology.

Megan Meade (Wilmette, Ill.) New Trier High School:
Megan ranks inside the top-30 for Illinois recruits. She medaled at the 2022 IHSA Sectionals in the 100 backstroke. She is a NASA Wildcat Aquatics team member and intends to major in Psychology.

Abigail Ninan (Campbell, Calif.) Kings Academy:
Abigail is ranked number 22 in the state of California and inside the top-300 nationally. In July she was a finalist in the 200 butterfly at the USA Swimming Futures Championship – Santa Clara. She was also a finalist in the 100 butterfly at the CIF State Championships. She is a team member of the Santa Clara Swim Club and intends to major in Business.

Gwendolyn Bakker (Nashville, Tenn.) Father Ryan High School:
Gwen is the fifth ranked recruit in the state of Tennessee. She was a finalist at the NCSA Summer Swimming Championship in the 50 breaststroke and a medalist at the TISCA State Championships in the 100 breaststroke. She is an Excel Aquatics club team member.

Martina Ciubulková (Devínska Nová Ves, SVK) Vysokoskolsky klub Univerzity komenskeho:
Martina is the highest rated recruit for the 2023 Illinois class, ranked at 105th. In the 2019 Slovak Junior Championships she won the 100 freestyle (57.54) and placed second in the 200 freestyle and 200 backstroke. She also added a trio of third place finishes in the 50 freestyle, 200 IM and 100 butterfly. She is a VŠK UK Bratislava club team member and intends to major in Kinesiology.

Bethany Mercer (Solon, Ohio) Solon High School:
Bethany is the first diver recruited under the Kempe campaign. She most recently placed fifth at the OHSAA Division I State Championships in the one-meter dive (443.55). Prior to state she earned first in the Northeast district with a 424.55. She is an American Flyers Diving team member and intends to major in Kinesiology.

Elle Crisostomo (Carson, Calif.) Charger Dive Club:
Elle is another diver added to the 2023 class. She will perform one and three-meter dives as well as platform. She most recently dove at the 2022 USA Diving Zone A Championships where she took 12th on platform (286.80) and 25th on three-meter (332.95). She is a Charger Dive Club team member.

Danielle O’Kelly (Princeton, N.J.) Jersey Diving Academy:
Danielle is a member of the Jersey Diving Academy coached by William Eric Blevins. She most recently competed in the 2022 USA Diving Zone C Championships where she took 25th in the platform (267.90) and 31st in one-meter (317.15). She intends to major in Psychology.

Elleka Boeres (Cincinnati, Ohio) Cincinnati Walnut Hills:
Elleka recently competed in the OHSAA Division I State Championships where she took 10th on the one-meter dive (418.10). She is an Ohio Kentucky Diving team member and intends to major in Psychology.

Marin McAndrew (Champaign, Ill.) Centennial High School:
Marin is the 36th ranked recruit in the state of Illinois. She is a two-time 2022 IHSA Sectional Champion in 50 (24.17) and the 100 freestyle (52.57). She is a Champaign County YMCA HEAT club team member and intends to major in Psychology or Kinesiology.