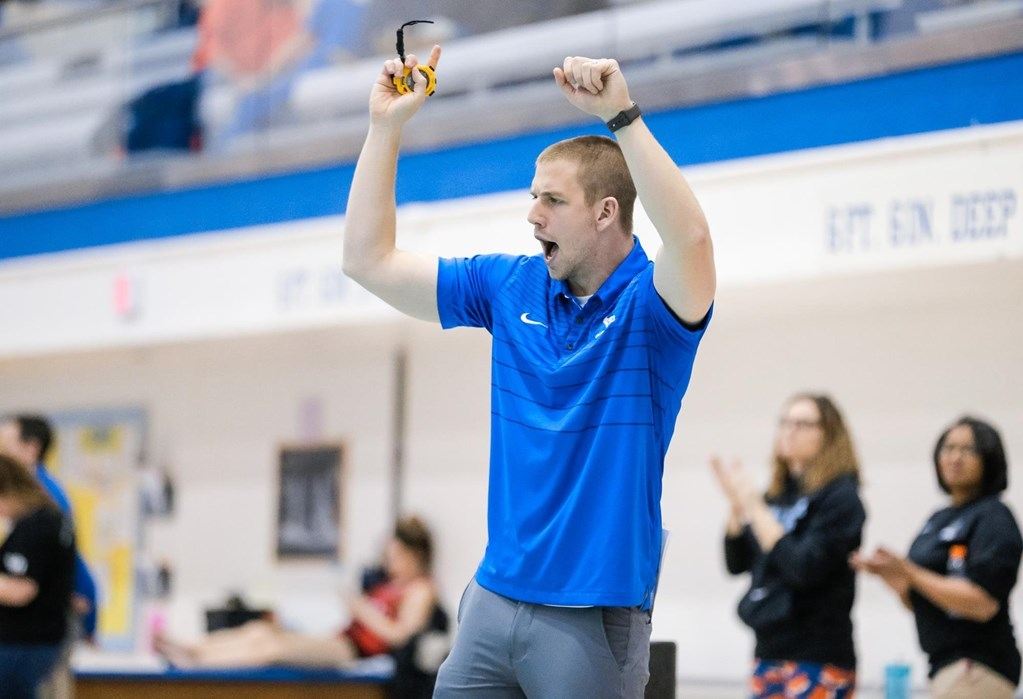 After 2 weeks of uncertainty following the resignation of head coach Bill Tramel on October 8th, Marshall has named Ian Walsh as the new head coach of the women’s swimming & diving program. Walsh was an assistant with Marshall from 2013-2016.

He spent last season as an assistant at Buffalo, where he started this year before being hired at Marshall. Before Buffalo, he spent a season as Olympic head coach Teri McKeever’s assistant at Cal. Last season, Buffalo’s women’s team (they cut the men’s team) had their highest-ever finish at the Mid-American Conference Championships, 3rd, with the highest point total in program history.

Former Thundering Herd swimmer Teel Hartmann, who was already working on campus in athletics marketing, led the team in the interim, including at the hosted West Virginia Games where the team placed 2nd out of 7 teams. The team didn’t have an assistant coach, nor a diving coach, to step in for Tramel after his resignation.

In their first dual meet of the season, Marshall lost to Ohio 169-131. Marshall won last year’s meet by 4 points. Walsh will have just a few days to settle in before the team races again on Saturday against Miami University in Ohio.

The team finished 3rd out of 6 teams at last year’s Conference USA Championships – their 3rd-straight such placing.

From the Marshall press release:

During his tenure at Marshall, the Thundering Herd broke women’s swimming school records 28 times, finished a program-best third at the Conference USA Championships in February 2016 and produced four individual conference champions. Walsh primarily worked with the sprinters and middle-distance swimmers and served as the recruiting coordinator at Marshall. In 2015, the program was named one of the top 16 most improved teams at the NCAA Division I level and, in the fall of 2014, sported a fall team GPA of 3.53, which ranked as the fifth-highest in the country among women’s swimming teams.

Correction- Marshall defeated Ohio University last year by four points.
Congrats to Ian he is a wonderful person and coach!

Great guy! So excited to see how well this team will do.