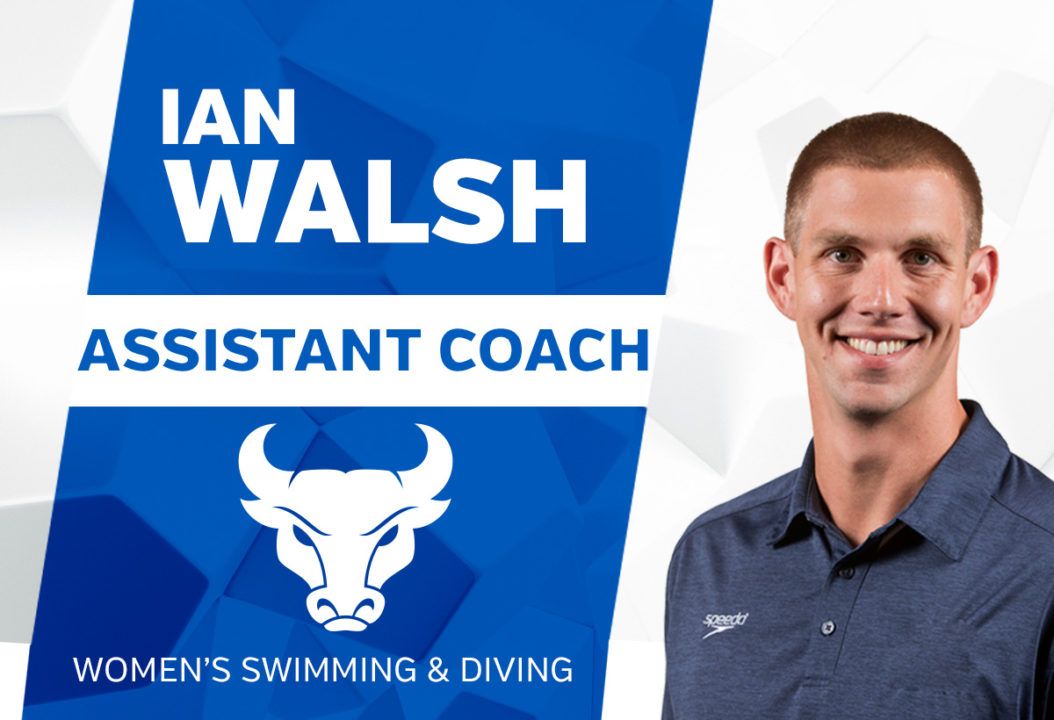 He know leaves one women’s-only program that was one of the best in the nation for another one that’s undergoing a huge transition: 2017-2018 will be the first season at Buffalo with just a women’s team after the school announced it was cutting its men’s program in April.

“Ian is going to bring new excitement and energy to the team,” head coach Andy Bashor said. “His experience at Cal, one of the best women’s programs in the country, and working with elite level student-athletes is going to benefit our team. I am looking forward to coaching with him and taking our women’s team to new heights in the MAC and in the NCAAs.”

For thethree seasons prior to Cal, Walsh was an assistant coach at the Division I Marshall University in Huntington, West Virginia. The team finished a program-best third place at the 2016 Conference USA Championships, with four individual conference titles. He was also the head coach of the YMCA Charleston Aquatic Team from 2013-2016 while at Marshall. He also spent a season as the head assistant at Albright college in Pennsylvania and worked with Bloomsburg University while in graduate school there.

As an athlete, he was a school record breaker at Duquesne University in the 100 and 200 yard breaststrokes and on both the 200 and 400 medley relays. He won the Atlantic 10 title in the 100 breaststroke in 2009.

Buffalo’s women’s team finished 3rd out of 8 teams at last year’s MAC conference championship meet, just 26.5 points behind Eastern Michigan for 2nd. They sent two athletes, swimmer Megan Burns and diver Abbey Croce, to the NCAA Championships, though neither came away with points. Burns returns this year as a senior while Croce has retired.

Do Cal haters not understand that the cost of living in the Bay Area is at least double that of somewhere like Buffalo? Just look at a cost of living comparison. To offset the discrepancy in costs, a $35,000 salary in Buffalo is equivalent to a $75,000 in the Bay Area. While Ian is probably a great coach, no way is Cal going to shell out $75,000 for a young assistant. Best of luck to Ian, Buffalo, and Cal!

Why, exactly did Ian Walsh FLEE the Cal womens swim team? It was a dream come true position for him when he took the job one year ago. One year trying to work with Cal coach Mckeever was enough crazy for a lifetime. Did assistant coach Walsh not like what he witnessed of how the swimmers are treated at Cal? Why give up a fantastic, at least on paper, job? There is much more to this situation. Recruits who chose Stanford over Cal are smart to forego the nightmare. Why can’t McKeever keep a much needed assistant? The situation is unstable for the swimmer athletes.

The Cal womens program is one that is quickly going down the drain. They can bring in talent because of the name of the program but most swimmers do not progress (Bootsma, Pelton, etc.) the list goes on. That is also why some of the womens pro’s, recently Coughlin and Franlink, have begun to train with the mens team opposed to the womens team. McKeever needs to realize waht she is doing is not working but it seems to be she cant swallow her pride and accept that.

Bruh. If you read his statement it’s pretty clear California was too far from home for him & his family. Being a 6 hour plan ride away from on on top of division 1 schedule must have been taxing. Seems like he kept Cal aware of his intentions based on their quick hire. Congrats on the new position, Ian!

Funny how every single one of athletes and now Walsh have “homesickness” or desire to be closer to family as the press releases reason people leave. I know for a fact this was written as the reason for another high profile athlete having left Cal and couldn’t have been farther from reality. What we read isn’t the full truth so may not be truth in this situation either. I suspect a trend and those that leave have same experience, have courage to leave a phenomenal institution, but can’t speak openly for fear of career repercussions from followers who could never wrap their head around the sickness behind that golden curtain.

6
-18
Reply
Not Betty
Reply to  Swammerjammer

From what I understand the high cost of living and not being near any family we’re the reasons.