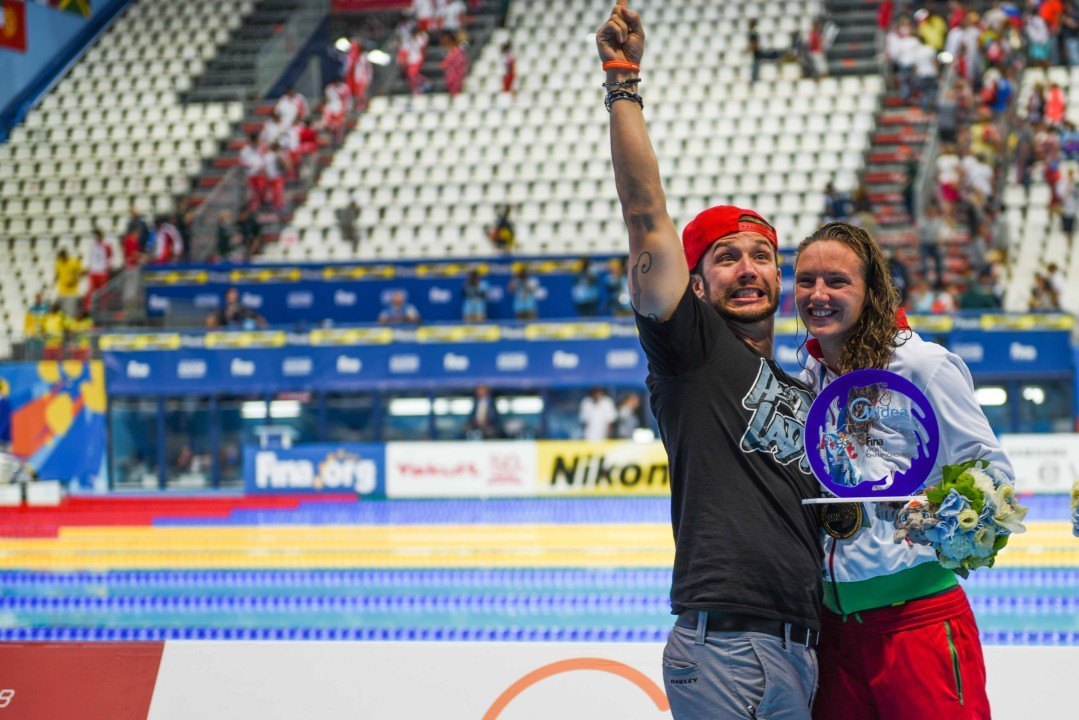 "I’m proud to announce that we open up our own swim club, Iron Aquatics, in September." - Katinka Hosszu Archive photo via Mike Lewis/Ola Vista Photography

Both swimmers have been under the qualification cut and will both be trying to qualify for their first-ever Olympic squads this week.

Lia snagged the record from Niksja Stojkovski who was actually swimming in the same heat and hit a 22.64 to take the silver medal.

A master of making a name for herself both in and out of the pool, Hungarian World Champion Katinka Hosszu has announced another addition to her extensive business portfolio.

The ‘Iron Lady’, whose moniker is a nod to Hosszu’s legendary toughness at meets, often times entering monster schedules with back-to-back events, already has established herself as the leader of an international ‘Iron Nation’ on a number of levels.

The woman who holds more World Records than any other in the world owns a web shop stocked with merchandise bearing her name and image, has produced her own series of novels, appeared in her own ‘Iron Lady’ video and most recently launched her own comic entitled Arcanum.

In an effort to continue motivating and inspiring swimmers, Hosszu and husband/coach Shane Tusup have announced the creation of Iron Aquatics. Based in Hungary, the club will serve as an all-inclusive, world-class aquatic training program, aiming at the creation of a forward-thinking and positive training environment where swimmers can have fun while working hard.

With Hamilton Aquatics (Dubai) Coach Darren Ward joining the staff, the Iron Aquatics program will be based on Hosszu’s own training regimen. The Iron Aquatics’ swimming pathway will be designed to guide swimmers from lessons to club and beyond. The club is slated to launch in September of this year, after Hosszu competes at the 2016 Olympic Games in Rio.

On an Olympic note, along with the announcement of Iron Aquatics, Hosszu promises that she will give ‘everything she has in order to represent Hungary on the highest possible level. She will do everything to give her country the best possible finish.”

Below is the Iron Aquatics Press Release in full:

“This press conference is not about the Olympic Games, although it would be strange if I didn’t say a word about the Games just two days before we leave for Rio. I heard about all your predictions about my performance. Many of you are counting how many medals, how many gold medals I will get, whether the relay (4×200 free) will make it to the final or not. This can put a lot of pressure on the athletes but I think we should be grateful that this sport entertains and brings together so many people. I only want to make one thing clear: I can’t promise medals, let alone gold medals; I can’t guarantee that I’ll fulfill your expectations.

However, there are two things that I can promise.

First, I can promise that I will give everything I have in order to represent Hungary on the highest possible level. I will do everything to give our country the best possible finish.

Second, even after Rio I would like to stand for important values and keep motivating and inspiring people so we can take Hungarian swimming to the next level. This is exactly why I moved back home after 2012 – to be a part of this process. I feel it’s my responsibility to use my knowledge and experience that I gained the past 23 years.

I’m proud to announce that we open up our own swim club, Iron Aquatics in September. Iron Aquatics will be an all-inclusive World Class aquatic training program designed to positively impact the lives of all who choose to be a part. We aim to create a forward thinking and positive training environment where the swimmers can have fun while working hard.

This of course doesn’t mean that my career ends after Rio. I will keep training and racing that same way I have been. I’d like to be at the 2020 Olympics and sometimes I even think about going to 2024…

Shane and I were able to put together a program that helped me get to the top of the world in my events. The Iron Aquatics program will be based on those training and technical aspects as well. The club will not be limited to swimmer development but will take on the responsibility to coach our coaches, teachers, and support personnel. In doing so we hope to raise the standards of coaching and teaching practices to the level that match and exceed our club development expectations.

To be able to develop this program in Hungary while still training full time, we had to find a coach who understands our philosophy and has experience in the age group level as well. This person is Darren Ward. Over the last fifteen years Darren has worked in the capacity of Development Coach, Assistant Head Coach and Head Coach as well as Club Development Officer, his wealth of experience in the sport of swimming has given him a great insight into not only athlete development but also the tools to manage and coordinate the many facets of developing club structure and stability. Darren’s journey into the elite level of coaching was created through many years of working with and creating learn to swim programs and club structure in his native Scotland.

We have set the bar high in our expectations for the program, however we truly believe we can create a movement that will change the lives of a great many and for the better and in doing so achieve and exceed our expectations.

The Iron Aquatic structure will eventually encompass the complete swimming journey from the paddling pool to the podium and everything in-between. Our swimming pathway will be designed in such a way that each step will link seamlessly together from Learn to Swim into the swimmers first club session and beyond. In doing so we will be able to nurture the highest levels of technical competency and give our swimmers the best opportunity to develop into fast swimmers.” – Katinka Hosszú

Would love to watch her swim sometime she is so fierce in the water! I hope 2024 is in the US.

I love that picture! Yeah Shane.

The transfer period in Hungarian swimming is in September (and in January).