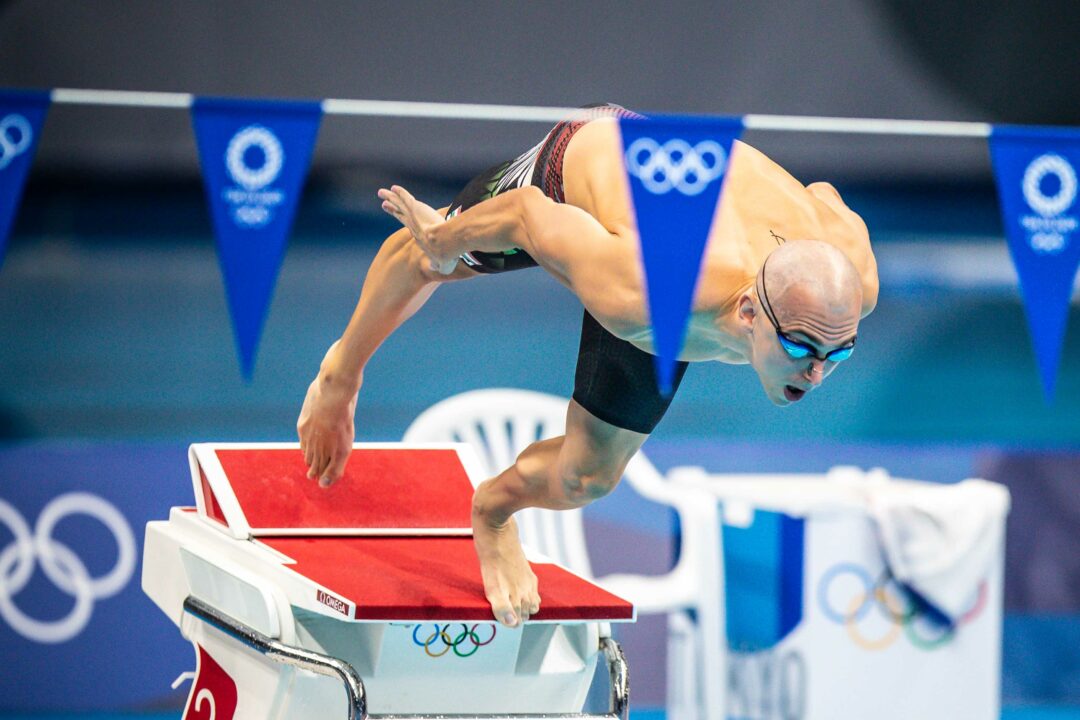 "I can say it calmly and with a smile: that was it, thank you," said 35-year-old Laszlo Cseh of Hungary upon announcing his retirement. Current photo via Jack Spitser/Spitser Photography

In a thrilling battle to the wall in yesterday’s men’s 200m IM final, China’s Wang Shun earned the gold, clocking a lifetime best, Asian continental and Chinese national record of 1:55.00. That held off runner-up Duncan Scott of Great Britain and subsequent bronze medalist Jeremy Desplanches of Switzerland who landed on the podium with times of 1:55.28 and 1:56.17, respectively.

Further down the line, however, was an Olympic icon by the name of Laszlo Cseh. 35-year-old Cseh of Hungary stopped the clock in a time of 1:57.68 to finish 7th in the race, one which the 33-time European champion has said was his last.

“My last race; 200 medley 7th place” is what his Instagram post read after the competition concluded on day 6.

Tokyo represented Cseh’s 5th straight Olympic Games, with the dynamic athlete having reached at least one individual final across each one. He is a 6-time Olympic medalist and although he never reached the absolute top of the podium, the man collected 4 silvers and 2 bronze medals.

The heyday of Cseh’s career coincided with that of Americans Michael Phelps and Ryan Lochte pitting the Hungarian against the powerful combination in the IM events and Phelps in the butterfly on multiple occasions. At the 2016 Games in Rio, Cseh was among the trio of silver medalists, along with Phelps and South Africa’s Chad Le Clos, who all tied for runners-up in the 100m fly behind winner Joseph Schooling of Singapore.

Reflecting on his 200m IM performance, Cseh told the Hungarian Swimming Association, “When I woke up in the morning, I was a little sensitive because this was still my last swim today. But it felt good, no negative effects, I was completely prepared for the final.

“Actually, the beginning was okay, the breaststroke wasn’t, unfortunately, I haven’t felt that way in a long time, now I tried to do it a little differently because it felt like yesterday’s version didn’t work – well, I didn’t go much further with that either.”

Reflecting on his career, Cseh said, “I had to come here to Tokyo because that was the right end to my career. If I hadn’t committed, I would now be sitting at home in front of the TV and it might have been depressing for a long time or maybe for the rest of my life.

“So I created my peace of mind, I can say it calmly and with a smile: that was it, thank you.

“Thank you to everyone, my family, my wife, my coaches, my clubmates, and my national teammates.

“Obviously I will miss you, but now I think I will step away from the sport for a while and then we will see what the future holds. ”

hell of a career

Amen. Not to take anything away from Phelps/Lochte, but Cseh would be THE GUY we all talk about for IM performances over the last decade if it weren’t for those two other guys. Simply amazing.

I hope the International Swimming Hall of Fame recognizes his greatness and inducts him once he is eligible. It’s amazing to think what he might have done had his career not coincided with Phelps and Lochte.

Bless you big man, I will continue to shave my head in honor of you. Congrats on such a historic career.

Don’t lie, you’re just going bald like the rest of us.

Actually, I’m 20 and I haven’t started losing my hair yet lol. I just shave my head because it’s easier and lets me wear my glasses more comfortably. I recommend a shaved head to everything, 10/10 stuff.

I wonder if he will be the last elite swimmer not to wear a cap in competition. Old-timers like me can really appreciate that.

I mean, wouldn’t that be Brent Hayden?

Another old-timer! Does anybody under 30 go for a time-honored shaved head?

I think he’s got a huge ego and I don’t like mentioning him, but Antani Ivanov for the most part does, he’s had caps on the past few times he’s raced though.

Doesn’t count if you cap your chrome dome.

Didn’t Matti Mattsson go with no cap in the 200 breaststroke final?

Right you are! Good call.

Matti Matteson (if that’s how you spell it

Yep, keeping the tradition alive. Thanks for pointing it out.

It was nice that Phelps singled him out in the finals during his pre-race analysis. 20 years racing each other.

class at its best

Indeed, I was so happy to hear MP talking about him, Their career had a nuimber of common points.

What did he say?

forever remembered as one the the best swimmers of all time

He raised the bar for international competition for 2 decades. Legendary career.

An absolute joy to watch. Thank you.

One of the best swimmers of his generation who just had the bad luck of specializing in the same events as the greatest of all time. Still had a career 99% of swimmers would envy and always put up a good fight. Good luck with whatever the future holds for you Laszlo.

just sucks that the one time he ties with phelps, its for a silver in 2016

Without a doubt, one of the greatest to ever do it.