Hungarian Ajna Kesely Doubles Up On Day 1 Of European Juniors 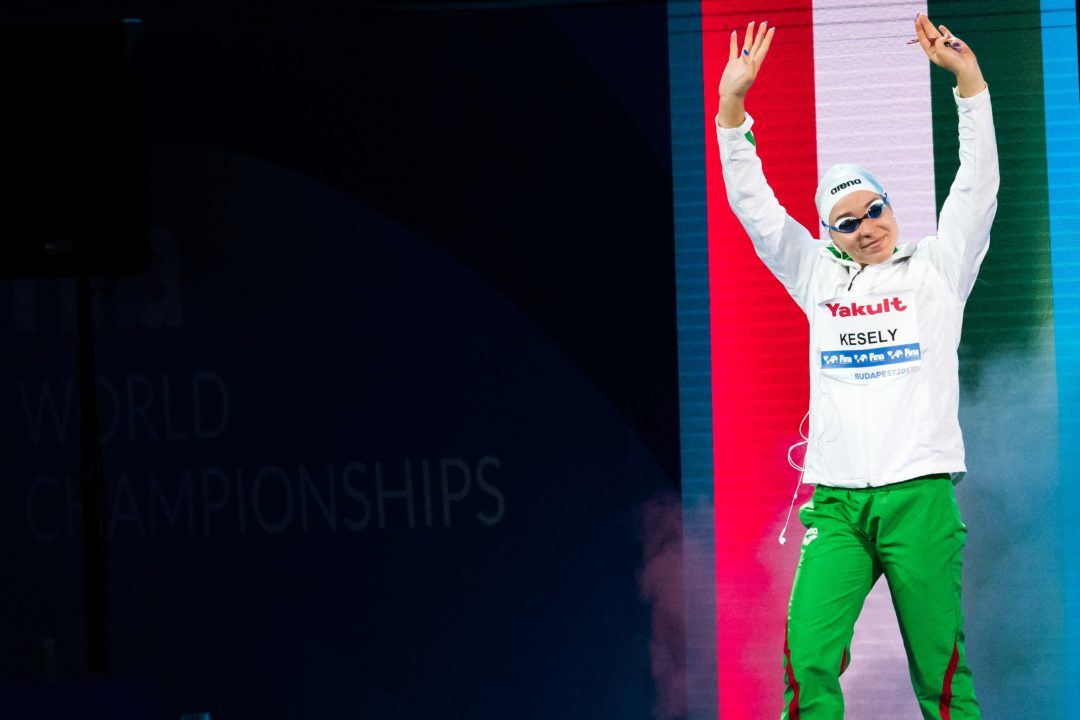 16-year-old Hungarian Ajna Kesely started off the 2018 LEN European Junior Championships in Helsinki with a bang on Wednesday, winning a pair of gold medals in the women’s 400 IM and 800 freestyle. Last year at the championships in Netanya, she won five gold medals.

She first swam the 400 IM, establishing a lead on the second length of fly and never relinquishing it throughout the race. She was nearly six seconds clear of the field at the halfway mark, and easily came in for the win in 4:41.55, dropping her previous best time of 4:42.53 by nearly a second. Last year she swam strictly freestyle events at this meet, so this was her first title in this event.

In the race for 2nd, Germany’s Yara Sophie Hierath turned 5th with 50 metres to go but her final split of 30.83 was enough to bump her up into the runner-up spot, registering a 4:45.75 to lower her previous best time by over four seconds. Lili Horvath also went a best time to put two Hungarians on the medal stand in 4:45.88, edging out Spain’s Alba Vazquez Ruiz (4:46.01).

Another busy Hungarian on day 1 was Kristof Milak, who won six medals last summer in Netanya. The 17-year-old first qualified 3rd in the 50 fly semis in a time of 23.84, with Russians Andrei Minakov (23.66) and Daniil Markov (23.82) leading the way.

Milak was back in the water approximately 20 minutes later in the men’s 100 back semis, posting a best time of 54.67 to qualify 3rd behind Russia’s Kliment Kolesnikov (53.99) and Romanian Daniel-Cristian Martin (54.30). Kolesnikov was the silver medalist last year, and has made great strides since including breaking the world record in the SCM version of the event and going the 2nd fastest time in the world this year at the Russian Championships in 52.97.

In his fourth and final swim of the night, Milak ended up back in 6th in a tightly bunched 50 fly final, finishing .05 outside of bronze in 23.82. Minakov won the event in a new best of 23.56, with Norwegian Tomoe Zenimoto Hvas earning silver in 23.68 and Markov the bronze in 23.77. Hvas set a new Norwegian national record in the prelims in a time of 23.59.

I can’t see any results of Milak swimming breast or IM recently, but based on his other 3 strokes alone he’d definitely be dangerous! Very exciting swimmer.

In an interview earlier this year, he said he’s really bad at breaststroke but he wants to work on it, so that he can try himself out in the medley sometime in the future. But also that it’s not a priority to him.

Traditionaly Hungarian coaches are trying to create IMers from nearly anybody. In this case it won’t be good. We don’t have too much potentional WR holders, but Kristof is in 200 fly.

Despite his good time, he swims badly in his 100back. His swim was all power, a lot of stokes and nothing else. Imho that kind of back is not effective in a race ?especially in medley): Too inefficient and energy consuming.
Great time but, if you can swim the 100fly in 50.6 and the 100free in 48mid, it is not a surprised.

What does it mean badly? There’re nice people and not so nice, runners with nice style and not so nice, swimmers… His time is PB and Hungarian age record as I’ve already written. This is the most/only important/importance. Swimming is not a simple beauty parade.

I really can’t be clarer than that: his back is ugly and, more important, that kind of back has no big margin to improve because is not efficient. Furthermore if he swims like that in a 200im he wuold be out of gas after 100m.
He is a great talent but, if he want to perform at high level in the 200im like said in the post of “captain awesome”, his backstroke must be totally rebuild.
Btw, if he proves me wrong I will be very happy, it means more competition.

I’ve already seen, yes you’re right. His back is not nice. But (we,I think) he has nothing to do with the IMs. Otherwise he started as a backstoke swimmer. Can you imagine?
The target is 200 fly. Tokio, WR , under 1.50.

Under 1.50 in the 200 fly? Very ambitious target..
I think that Milak and his coach will decide to compete in other races, beside 100 and 200 fly, at Olympics2020.
Probably not in the Ims, but the 200 free is a valid option, and obviously the relays.
So, more swims Milak will do, more difficult will be perform at his best in any of them.

I am ready to bet that it will be hit in 2019.
As Brownish has already referred to an interview with him, he says that he is just starting to improve his back and free.
Also, that would be stupid not to keep the main focus on the 200 fly WR, as it was already such not letting him race last year in Budapest.

I don’t know, great flyers can go out smooth in the IM and be even with the lead with all their energy remaining so I’m not so sure his back will hurt him as much as you think. Plus he obviously has a great kick so his free leg will undoubtedly roar home.

He is bad in breaststroke, so IM will be later or perhaps never. Most of the Magyars hopes the 2nd. Fly is the priority, but this year they diversified his trainings with the backs and the 400 free. And as we know from Gold Medal Mel Stewart 400 free is useful for swimming 200 fly.

Does Johannes Calloni who finished 3rd at the 400 free swim for Stanford? If so, how come he is only 18 and already completed one year of college?

His birthday is January 3rd, 2000. I was still 18 after having finished my first year of college. If he were in the US educational system, he would’ve most likely been just finishing his last year of high school, but, it’s also not uncommon for students going to Stanford to enter at 17.

Johannes attended St. Peter’s Prep in jersey city and competed for Scarlet Aquatics. He was always one year too young for his grade.

I was familiar with guys who were the youngest in their grade (born in December), but seeing someone who was born in January and attends a higher grade is pretty uncommon. Not that those couple of days make any difference regarding school and brain development.

Anyway, thanks for the explanation. Great swim for him.