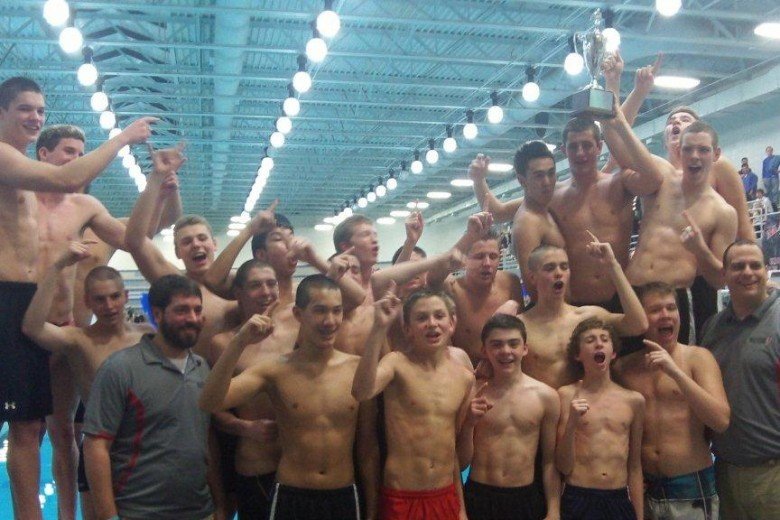 Janet Hu (above) and Andrew Seliskar were swimming in high school action on Saturday in a record-setting night in Northern VA. (Photo Courtesy: Matt Rees)

The above video is of the last three legs of the boys’ 400 free relay.

Matt Rees is a huge swim fan, a swim parent, and a brilliant journalist who has worked with The Economist and the Wall Street Journal, among other publications; he now owns his own Financial consulting firm, Geonomica. He was on deck for the Northern Virginia Championships and brings the following report.

Northern Virginia has a well-deserved reputation for producing a steady stream of high-speed swimmers – think Tom Dolan, Ed Moses, Kate Ziegler, and countless others. On Saturday night, the next generation of superstars buttressed that reputation, with a series of swims that broke regional records (many by freshmen and sophomores), and one NAG record.

James Murphy broke the Meet Record in the 200 free with a 1:39. (Photo Courtesy: Matt Rees)

The meet was a showcase for Janet Hu, a junior at Oakton High School, and Andrew Seliskar, a sophomore at Thomas Jefferson High School. Both entered the meet already in possession of Northern Region records – Hu in the 100 free and 100 back and Seliskar in the 200 IM and 100 breast. Even more impressive, both set 15-16 NAG records last year – Hu in the 50 free and 100 fly and Seliskar in the 100 breast.

Thus for Hu and Seliskar, the question Saturday night wasn’t whether they would win their events but rather, just how fast would they swim?

Both lived up to – or exceeded – the high expectations of the energetic standing-room-only crowd at the Oak Marr Rec Center. Seliskar, who gives new meaning to the word “precocious,” notched the biggest milestone with a time of 54.09 in the 100 breast, knocking .02 off his NAG record. Expect him to keep dropping this record. Consider that he won this race by close to two seconds, over Brandon Fiala of West Springfield; he’d already swum the 200 medley relay (1:33.85) and the 200 IM (1:46.43); and he’s neither shaved nor tapered. In both the 200 medley and the 200 IM, regional records fell. Actually, they were shattered. Seliskar took nearly 3.7 seconds off the IM record – a record he set in this meet last year. His only “silver” came in the 400 free relay, where he and his Jefferson teammates could not keep pace with a Robinson squad composed of a junior and three freshmen (more on those dynamos shortly).

The most accomplished of Hu’s teammates is just a freshman, Megan Byrnes. In her coming-out party Saturday night, she showed why Oakton is destined to be a force for years to come.  Plowing through the water like Poseidon, she set two regional records – one in the 200 free (1:50.34) and another in the 500 free (4:50.43). In the latter event, she won by nearly 12 seconds, and broke the old regional record by nearly three seconds. (Fittingly, the song that blared through the venue as Byrnes and other 500 swimmers walked to the blocks was “Girl on Fire” by Alicia Keys.)

The other freshman to tear up the pool was James Murphy of Robinson. He rocketed to a 1:39.16 in the 200 free, breaking the regional record, and then turned in a Conger-esque 45.71 in the 100 free. He also anchored 200 and 400 free relays – both of which Robinson won. Joining Murphy in these relays were two other freshmen – Luke Jones and James Jones – and a junior, Matt Jones (we’re exploring how many of these Jones are related). Murphy’s swim in 400 free relay was particularly impressive, coming amid deafening cheers and with Seliskar swimming immediately to his left.

Perhaps the most historically-significant record to fall came in the girls 100 fly. The old mark, 55.01, had been set all the way back in 1986 by Michelle Griglione, who went on to swim for Stanford and then place third in a number of events at successive Olympic Trials. Hellen Moffitt of West Potomac took the record down to 54.53. But in a measure of just how fast this meet was, two other swimmers also swam faster than the 27-year old record – Laura Branton of Oakton (54.66) and Leah Rogers of W.T. Woodson (54.70).

We shouldn’t overlook Hu’s older brother, Philip, who also turned in two noteworthy performances. He won the 100 fly in 50.58 and the 100 back in 49.31. The 100 back swim broke a regional record that had been set last year by Stephen Seliskar (yes, Andrew’s older brother and now competing for Purdue).

Hellen Moffitt of West Potomac accepts her award for winning the 100 fly in a new regional record time of 54.53. (Photo Courtesy: Matt Rees)

The one other record to fall came in the girls 50 free. Abi Speers of Langley cruised to a 23.13 – lowering the record she had set last year with a 23.32.

On the boys side of the team scores, James Madison prevailed with 310 points (out of 1,159) despite winning only one individual event, and that was the diving competition and Grayson Campbell.

A special shout-out must go to the meet officials, who did an extraordinary job of moving things along with military-like precision and efficiency, all while maintaining a friendly attitude and letting the swimmers revel in the moment. The boys and girls team winners both took the obligatory dive in the pool after being awarded their trophies, with nary a peep of protest from anyone. A fitting end to a memorable meet.

The girls from Oakton ran away with the title in Northern VA. (Photo Courtesy: Matt Rees)

Andrew Seliskar is one of the most talented versatile American young swimmers. Good in all 4 strokes. He’s to follow in the next years.
Janet Hu is a beast in short course with incredible underwaters and can be one the greatest NCAA swimmers of all time. She’s great on freestyle, on butterfly and on backstroke. The college team which will have her will be very happy. Also very interesting to see if she can convert her big talent to long course.

Conger and Ledecky were impressive at their meet on Saturday night. I was a spectator at their meet from an opposing team and they put on a show for everyone in the stands. I believe Conger was 19 in 50 free. There were many other impressive swims at that meet as well, and most of the teams at that meet also have one more championship meet left. Fast swimming in the VA/MD area.

Yes. Conger and Ledecky likely untapered. Their big meet is next weekend.

These athletes live in a state with one of the finest universities in the country for academics in UVa. If they stay home its good for the state and very very bad news for the rest of the ACC and NCAA as well. Stay home young lads when Mr. Jefferson’s university calls!

Abi Speers is looking like a very good get for Cal. There are some very high end sprinters in her class, so Teri won’t need Abi to be a major contributor early. With a few years of Teri’s coaching and Cal strength and cpnditioning, Abi could develop into a strong contributor as a junior and senior.