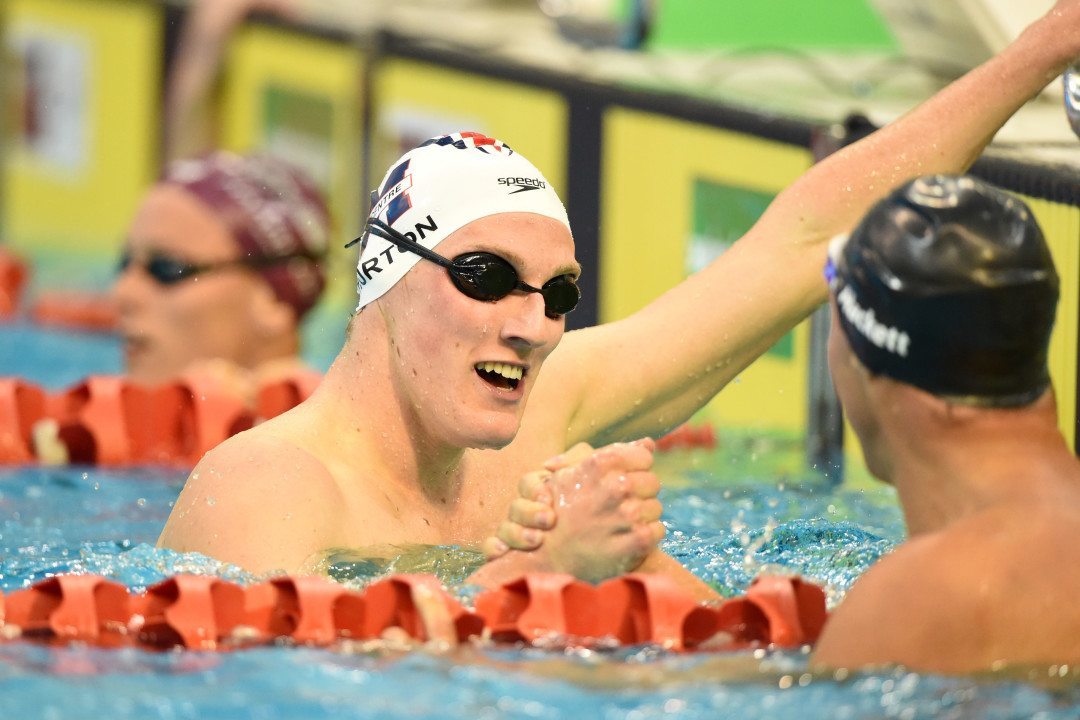 It was a déjà vu moment for Australian Mack Horton when his Pier to Pub open water lead was cut to nil by winner Sam Sheppard. Archive photo via Courtesy of Swimming Australia

In a repeat of the GMHBA Lorne Pier to Pub ocean race’s outcome from 2015, this year’s edition saw open water swimmer Sam Sheppard just touch out 400m freestyle Olympic Champion Mack Horton at the very end of the race. The prestigious 1.2km race in Victoria, Australia is in its 37th year, with the ocean course running from the Lorne Pier to the foreshore in front of the GMHBA clubhouse.

Nearly 5,000 competitors, both amateur and professional alike, took to the course on January 7th, with Horton making his 2nd race appearance. Back in 2015 at just 18 years of age, Horton fell just short of winning when he was touched out by defending champion Sheppard. Just as in 2015, this year Horton led for most of the race, with Sheppard catching a perfectly timed wave in to enable him to get a jump on the beach sprint and ultimately finish just one second ahead of the Olympic gold medalist.

Horton said after the race, “Obviously ocean swimming is what Sam does and pool swimming is what I do, so I was just trying to get as much of a gap in the water as possible where I was comfortable.

“But that (finish) is what happened two years ago, so I always knew it was going to be a challenge.

“I missed last year because we were on a training camp but when I can come, I’d love to come back, it’s a fun event, and it’s great to see so many people being out enjoying the water, being safe and getting involved in ocean swimming.”

For Sheppard’s part, he commented regarding Horton, “He’s a class swimmer, he’s an Olympic goal medalist, he’ll win this one year, but it’s always a bit of fun to get one up on him.

“But to catch a wave, that’s part of the race, you’re never going to be more than a wave ahead, if you get onto that wave, it can make all the difference.”

The race, which benefits the Lorne Surf Life Saving Club to help its voluntary lifesaving activities, almost didn’t happen this year due to shark sightings. Eastern View, Fairhaven, Split Point and Point Addis are all within 40 km of Lorne and had reported shark sightings prior to the race start.

As predicted here by commentators .

Was the finish out of the water up on the beach? I would enjoy seeing that;)