Hobson and Johnston Duel to NCAA-Leading 8:48s as Texas Men Down TCU 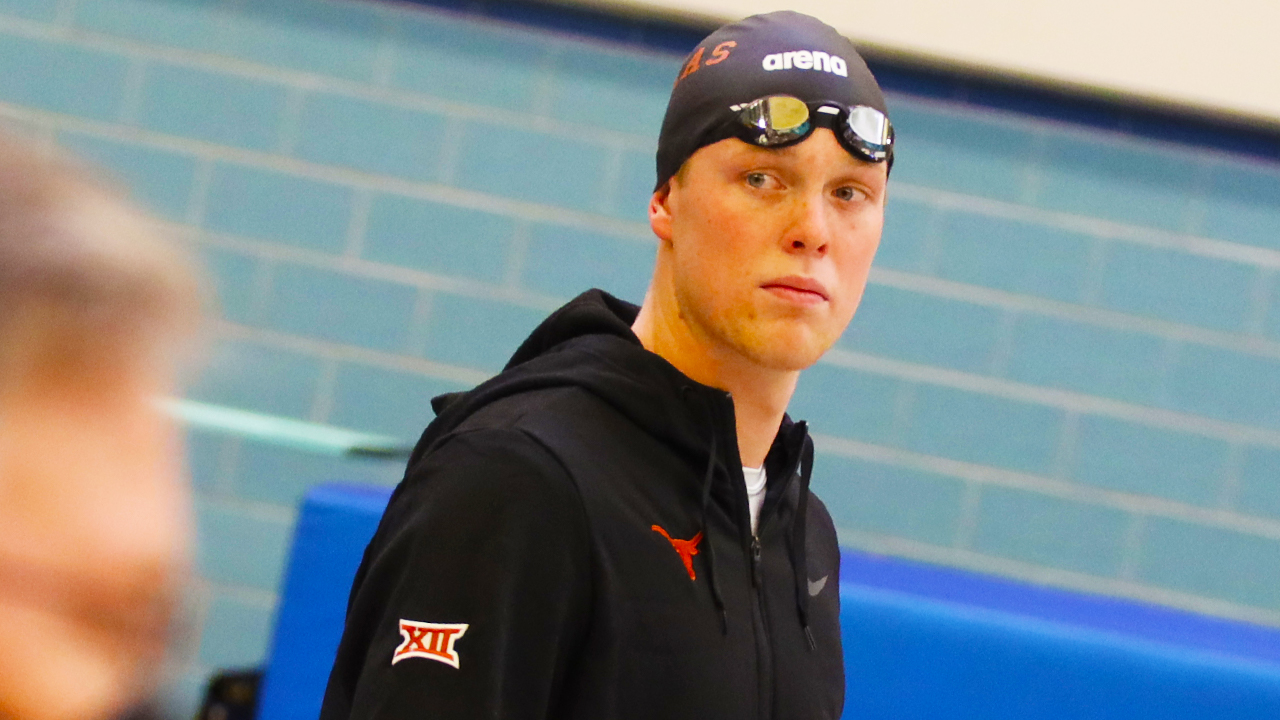 The Texas Christian University Horned Frogs men made the intrastate trek to Austin this weekend to take on the #1 Texas Longhorns in a two-day dual meet. After the first day, the Longhorn lead the Horned Frogs, 189-100, as the defending national champs touched first in almost every event. It was not immediately clear if any swimmers were in tech suits for the competition.

Next, any fans in attendance were treated to an epic race between Longhorn freshman Luke Hobson and sophomore David Johnston in the 100 free. Johnston, who owns the 17-18 age group record in the event, maintained a narrow lead for most of the race. However, Hobson closed in 24.49 to Jonhston’s 24.84, winning in a speedy 8:48.09 to Johnston’s 8:48.28. Hobson is still 18, and that time moves him to #6 all-time in the age group, clipping former record-holder Jeff Kostoff.

Additionally, Hobson and Johnston move to #1 and #2 in the NCAA this season. While the 1000 free is not contested at Division I NCAA Championships, or most major midseason invites, teams do regularly race it at dual meets throughout the season. According to the NCAA database, Ohio State’s Charlie Clark had held the fastest time of the season with a 8:48.96, but that’s a converted time from 800 free at the U.S. Open. The next-fastest time was Hoosier Michael Brinegar’s 8:51.20 the Indian-Louisville dual meet last week.

The 200 free featured a battle of 2021 NCAA A-finalist in the form of Longhorn Drew Kibler and Peter Larson. While Kibler has the fastest lifetime best, Larson got the win tonight, touching in 1:34.96 to Kibler’s 1:35.65. No other men finished under 1:40.

Transfer Cameron Auchinachie swept the sprint freestyles. He defeated Daniel Krueger in the 50 free, 19.74 to 19.92, then came back after the break to get the touch over Krueger again, this time 43.32 to 43.55.

After the 200 breast, Texas began exhibitioning its events, but it didn’t matter initially. TCU’s Geremia Freri won the 500 free outright with a 4:21.69 victory. Teammate Piotr Sadlowski nearly made it two in a row for the Horned Frogs. Officially credited with the win, he touched 4th with a 47.95 in the 100 fly, but he was just 0.32s behind Texas’ Zac Van Zandt, who touched first with a 47.62.

Texas diving star Jordan Windle continues to be absent while suspended due to “allegations of misconduct,” but Noah Duperre led the diving competition with a pair of wins in the 1m (373.58) and 3m (408.90) events.

The two teams resume the competition tomorrow, although in a long course format.

USTIN, Texas – Geremia Freri had a strong win in the 500 freestyle as the Horned Frogs competed in Day 1 of the dual meet against No. 1 Texas.

Freri’s time of 4:21.69 was good for first, beating the next closest Texas swimmer by over two seconds. It’s his fourth NCAA B cut of the season in the 500 freestyle.

Also notching a B cut was Jadon Wuilliez as he placed third overall in the 100 breaststroke with a time of 53.73.

Piotr Sadlowski had an impressive performance in the 100 butterfly as his time of 47.95 was good for third overall. Also placing third was Luke DiMiceli in the 200 freestyle with a time of 1:40.14.

Up Next
The Frogs begin the final day of the dual meet against No. 1 Texas at 11 a.m. with the long course time trials in Austin, Texas.

AUSTIN, Texas – No. 1 Texas Men’s Swimming and Diving collected 12 victories against TCU on Friday afternoon on Senior Day at the Lee and Joe Jamail Texas Swimming Center to build a 189-100 lead on day one of the two-day dual meet.

All told, Texas claimed points for the top-two spots in 11 of the 14 individual events and had the top-three scores in nine.

Competition will resume on Saturday at 11 a.m. with long course swim events and a men’s and women’s platform exhibition.

Does Carson go the 200 fly this year instead of 200 back? They’re both loaded with Julian, Albiero, Burdisso, Marchand, Luca? in the fly and Lasco, Mefford, Gonzalez? (probably sticks with 2BR with Bryce back, but I think he’d be 1:36), & Carr. Maybe had to go back just to challenge all the Cal boys.

Suited or unsuited? I know the article says it is unclear, any one have any insight?

some suited some not. Zettle, Kibler, Jiang not suited

Maybe coming off an injury given he missed the winter invite?

This is what I was thinking too.

It’s an interesting mix of times across the meet. Some seem fast for in-season and/or suited (that 1000, Corbeau 200, Scheinfeld, Vines, Larson, Grimm 50bk) and some pretty sluggish by comparison (Jiang, Kibler, Connery, Zettle).

I agree that it seems some swims may have been suited while others weren’t. I’m very curious if any were suited.