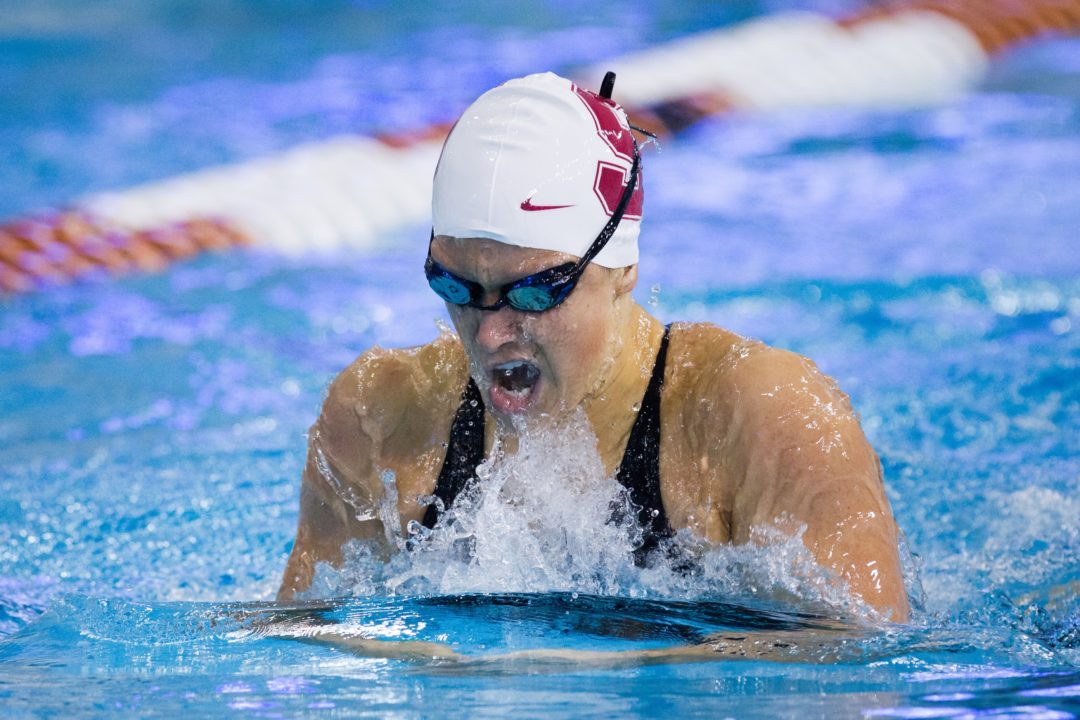 The NFHS announced a change in the rules for the underwater pullout in breaststroke. (Photo Courtesy: ©Tim Binning/TheSwimPictures.com)

The National Federation of High Schools (NFHS) has made a slew of rules changes pertaining to swimming and diving for the 2012-2013 season. But none are bigger than the clarification of breaststroke, which follows the path laid out by FINA earlier this year, and will bring the high school rules in parallel with those for USA Swimming.

The new rule surrounds the contentious arguments about what constitutes the “initiation of the pull,” specifically with regard to the dolphin kick that is now allowed on the pullout. The argument stems from a difference of opinion on technique. Whereas Americans have generally, since the rule was initiated almost a decade ago, learned to do the dolphin kick mid-pulldown, most other countries have used the butterfly kick at the very start of the pull with a lot of success.

The new rule will state that “the initiation of such arm stroke shall be accomplished by a discernible horizontal separation of the hands.” This should give a little more firmness to a rule that was a bit floppy, and kept many coaches from pushing the butterfly kick to earlier in the pullout. The old interpretation was that the pullout began with any lateral or downward separation of the hands, and it would be hard for an official to declare whether or not that happened with the naked eye.

This doesn’t make the rule perfect still (it probably never will be) as coaches are now trusting the “discernible” eye of an official. One would be hard-pressed to dispute a call based on an officials ability to discern separation. There’s also still a question of what defines horizontal separation. Does this mean there has to be a space between the thumbs? That would be my understanding and treatment as an official.

The only other competitive rule change is in the Backstroke Flipturn. The rule now specifically clarifies that a swimmer is allowed to lift their head to initiate the rotation in the flipturn. I have never personally seen a swimmer disqualified for this,  but it seems to have been an issue of some confusion.

The rest of the rules were more administrative and related to diving.

Rule 3-3-2, which regards logos and advertiser marks allowed on suits, simply says now that logos and advertisements exceeding certain sizes are “prohibited”. The new rules will offer specific punishment for violation of these rules, in a fairly logical sense. If it’s discovered before the race, the competitor will be told to change.  If they can do so without delaying the race, they’re covered. Otherwise, they’re disqualified (including if it’s discovered after the start of the race). The official text is expected to read as follows:

In diving  last year the NFHS put in the option for the dive-order to be done either by seed or by drawing lots in championship meets; this year they clarified that drawing lots is the default option.

The final rule, which will go unnoticed to almost everybody, involves the jurisdiction of a referee; he now maintains command of the meet through the completion of any post-meet reports he has to make.

The NFHS also released the latest participation figures: Swimming and diving ranks No. 10 in popularity among boys sports with 133,900, according to the 2010-11 High School Athletics Participation Survey conducted by the NFHS. The sport ranks eighth among girls programs with 160,881 participants.