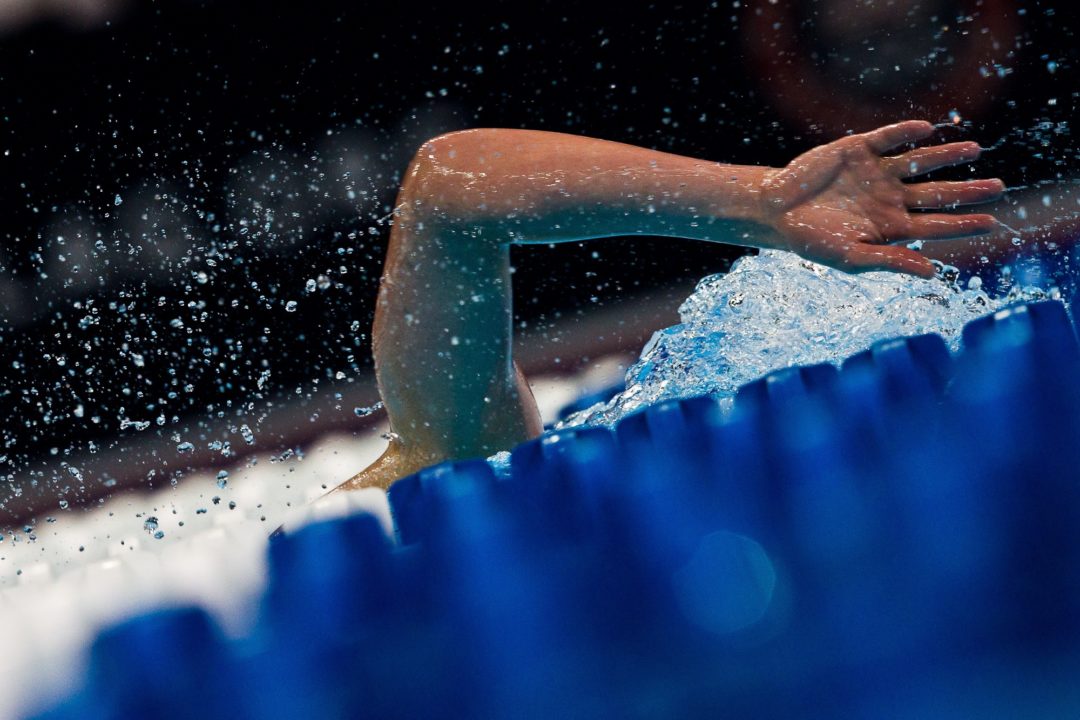 The Tennessee High School State Swimming Championships are as close as can be after day 1 on the girls side, with Harpeth Hall and St. Mary's tied for the lead at 97.5 points. Stock photo via Tim Binning/TheSwimPictures.com

The Tennessee High School State Swimming Championships are as close as can be after day 1 on the girls side, with Harpeth Hall and St. Mary’s tied for the lead at 97.5 points.

For the boys, the Memphis University School leads Baylor by 32.

The only state record on the girls’ side came from Christ Presbyterian Academy’s Tatum Wade in the 200 IM. Wade, one of the nation’s top high school seniors who will swim for USC next year, went 1:57.87 to crush the old record and become the first Tennessee high school girl under two minutes. Wade was already the state record-holder in the 200 and 500 frees, but swapped the former event for the IM this year.

Also under the old record was Ella Nelson, the night’s top finisher for Harpeth Hall. Nelson was 1:59.45, a new lifetime-best for her at just age 14.

St. Mary’s won the night’s only relay, the 200 medley, to help grab the team lead. St. Mary’s got a 24.8 split from butterflyer Kiara Norris and a 23.5 from anchor Alison MacQueen to go 1:45.17. They won by almost two seconds over the rest of the field. Also on the winning team were Abbey Autry (27.5 on backstroke) and Lauren Mabie (29.2 on breast).

A night of parity saw six different teams win the six overall events. Hardin Valley’s Erica Laning came within six tenths of a second of Wade’s 200 free state record, and won the event in 1:46.36. Her team sits third in the current standings.

On the boys side, Trey Freeman broke through with a state record for the Baylor School, knocking down an eight-year-old 200 free mark. Freeman was 1:36.70 to take that win, four tenths under the old record.

But the Memphis University School countered with two wins to hold the overall team lead. Memphis University won the 200 medley relay to kick off the night, going 1:31.27 with the team of Alex Robinson (22.5 backstroke), Parker Kaye (26.0 breaststroke), Jack McCaghren (22.0 butterfly) and CJ Turner (20.6 freestyle). Turner held off a surging Science Hill and Baylor School to take that win.

Science Hill’s Daniel Chang had one of the swims of the meet, cutting three tenths off his lifetime-best to win the 200 IM in 1:46.52. That was just three tenths off the state record set by current Tennessee Volunteer standout Sam McHugh. Chang has committed to Harvard for next year.

The 100 fly went to Caleb Harrington of Bearden in 48.74 with Memphis University once again second on McCaghren’s 49.20.