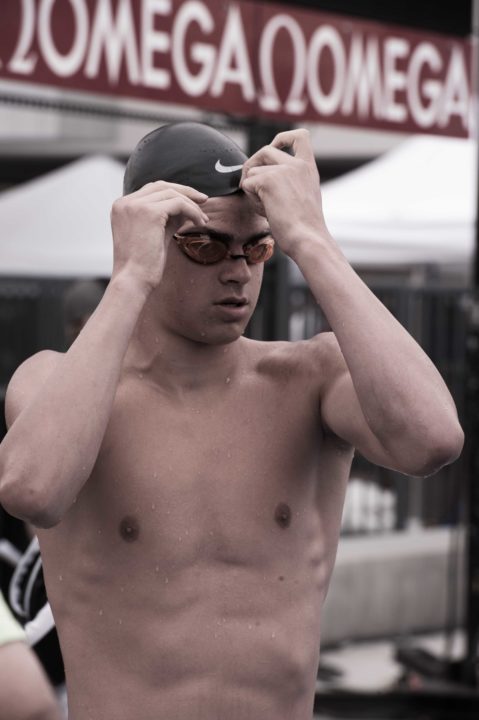 Michael Andrew's two National Age Group Records weren't special just because they were records. It's specifically because of which two events they came in. Archive photo via Mike Lewis/Ola Vista Photography

The HardCoreSwim of the week goes to Michael Andrew for breaking two National Age Group Records at the Minneapolis Grand Prix. At a meet where 2013 may have been the best edition yet (Agnel vs. Dwyer in the 200 free, Cielo in the 50 free, Cielo vs. Adam Brown in the 100 free), Andrew’s swims really stood out as he started to make serious moves beyond being just a ‘notable finisher’ due to his age, and to a point where he’s really taking on some big-name swimmers.

Yes, Andrew is big for his age, standing around 6’3″ or 6’4″ tall. Here’s the thing, though: at 14, he’s almost to the age where being too tall can’t be used as a slight against him. Yes, some swimmers are tall (Yannick Agnel is a great example), but those physical attributes are one part of what goes into the determination of an athlete’s skill. That’s as true in swimming as it is in any other sport, and he’s now at an age where he’s far from the only kid who’s poking into those heights.

I think that the versatility that he showed off at that meet was also pretty special, and perhaps undervalued (this is the secret to his Ultra Short training that isn’t talked about as much).

Andrew was a full second better than both of those guys on his fly, and around three seconds faster in his 100 breaststroke! That’s a truly shocking difference!

Maybe the slight disappointment is that he went only the second-fastest 200 yard IM time in 13-14 history at the meet with a 1:49.09 – still a full second behind Gray Umbach’s National Age Group Record of 1:48.08. Given that Andrew was a 50.2 in the 100 back at his meet and has been a 45.6 in the 100 free (he didn’t swim it in Minneapolis), it seems like just a matter of time before that record goes down as well. Arguably, right now, his backstroke is his weakest stroke, and he’s still 9th on the all-time age group list! Andrew is just firing on all cylinders right now in short course, and it’s impressive to watch.

I dunno man, he’s lookin a bit chubby in that picture

Chubby? If that is considered chubby then I must be morbidly obese. LOL

I was impressed by his versatility as well. That 100BR was amazing and to be the best at 3 of the 4 strokes in his age group by a good margin and 2nd fastest in the backstroke is outstanding.

The only downside I see is he’s turning into a sprinter and doesn’t have the endurance for the 200’s. When he does step out into those longer events he does well, but not nearly as dominate which I guess you would expect from his training.