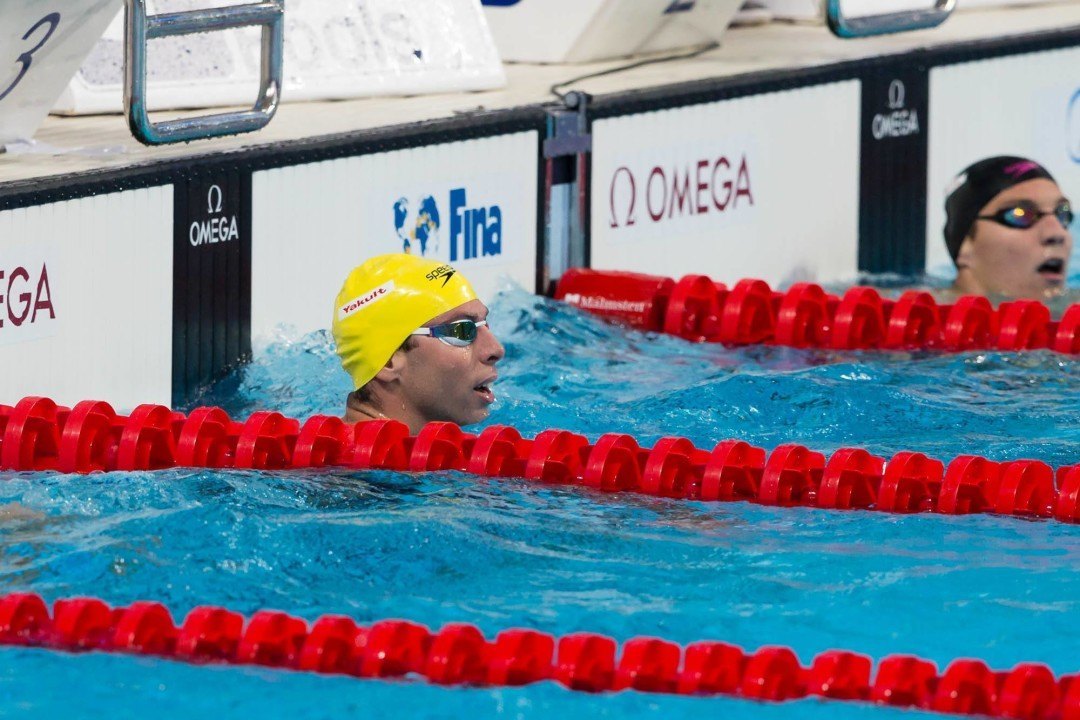 Grant Hackett says the Aussie team is much more 'together, tight' and supportive than the team was in London 2012. Current photo via Tim Binning/TheSwimPictures.com

With the help of double backstroke golds by Mitch Larkin and Emily Seebohm, as well as a sweep of the sprint freestyle events by Bronte Campbell, Australia saw its best finish at a World Championships since 2007.  The country finished its run in Kazan with a total of 16 medals (7 golds), a number which totaled more than the entire Australian haul from 2011 Worlds, 2012 Olympics and 2013 combined.

Aussie Head Coach Jacco Verhaeren said of the result, “It was a big week, a fantastic week, we’ve seen a fantastic team, great performances. There are still some youngsters who need to learn, and we will give them the opportunity to do so but overall the outcome is phenomenal.”

Comeback king, Grant Hackett, who came out of retirement in late 2014 and competed as part of the Aussie men’s 4x200m freestyle relay (prelims) in Kazan, attributes at least part of the Dolphins’ success to its renewed, healthy team culture.

“From what I’ve seen I feel like I’ve really walked back onto a team that I walked away from back in 2008 — it’s a great feeling and I think the results are reflecting on that,” Hackett stated to The Courier Mail.  “It’s been huge (growth) and it’s been reflecting in the performance which is what we wanted to see. It’s just great to be part of it.”

Team Australia’s recent team history is shrouded in scandal, as an independent report conducted after the country’s lackluster performance at the 2012 London Olympic Games reported incidents involving drinking, use of prescription drugs, bullying, and other ‘toxic’ behavior.

Seeing the progress of the team since that negative time however, Hackett says, “(The team) was clearly a lot more fragmented and a lot more individualistic in nature (in London). You see the team now they’re really together, they’re tight, the way we carry on together on the bus and the support we give each other when someone has a bad performance everyone is genuinely concerned and wants to be able to provide a helping hand.”

On an individual level, although Hackett achieved a laudable milestone in simply making the Australian world champs team, he says he wished he had seen a better result than his prelims performance in his leg of the 800m free relay. “It’s a bit of a shame to not get that opportunity to get a couple of swims particularly when that first one just blows out the cobwebs. I sort of reflect upon it and go well I’ve done the best heat swim I’ve ever done in a 200m freestyle in my entire career so I know I always drop significantly as I get into the night.”

Hackett continued to The Courier Mail, “I know I did the best I’ve done and that was good but obviously disappointing to be part of the final four but I have to respect Jacco’s (head coach Jacco Verhaeren’s) decision when they do that and certainly support the team and that is what I did and fortunate enough to get a bronze from it.”

The 35-year old will get his chance to throw down more fast swims on his comeback journey as he is set to compete at the Paris-Chartres, France stop of the FINA World Cup on August 15th and 16th.

I know it’d be tough to do given his particular wheelhouse, but it’d be awesome to see Hackett join Phelps, Cseh, Coughlin, etc. in the 30+ personal-/textile-best group leading up to (and hopefully in) Rio! 🙂

He’s certainly a possibility to make the team for Rio but hardly a certainty and for those who watched through clear eyes, rather than rose coloured glasses, the reality of Hackett vintage 2015-2016 is much different to that of his prime. Both AUS swimmers in the 400 were disappointments, not making it out of heats. This has became customary for McKeon, the current poster boy for the serial tourist phenomena in AUS swimming & a savage reality check for Horton. The door is open for someone else but is the current Hackett model capable of 3.45 let alone 3.42-3.43 …. doubtful. A (hopefully) resurgent Fraser-Holmes & McEvoy would be front runners for individual 200 but the door is open for… Read more »

People are easily mistaken from longevity……Cseh is only 29

Ok but I have a list rating them all – A- F . As usual plenty in the F category