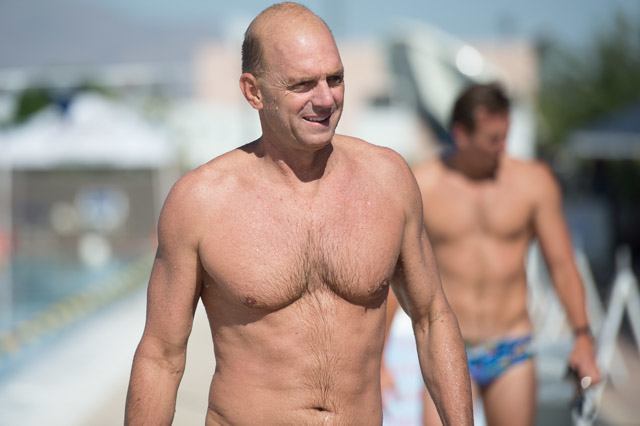 The Naval Academy announced today that three-time Olympic Gold Medalist Rowdy Gaines will serve as the analyst on the video stream of the Army-Navy swimming and diving meet. Archive photo via Mike Lewis/Ola Vista Photography

ANNAPOLIS, Md. –– The Naval Academy announced today that three-time Olympic Gold Medalist Rowdy Gaines will serve as the analyst on the video stream of the Army-Navy swimming and diving meet that will be contested Dec. 10 in Lejuene Hall. The 5 p.m. meet will be streamed for free on the Patriot League Network via NavySports.com.

Admission is free to attend the meet in the 1,000-seat facility on The Yard.

“I have been broadcasting swimming for 30 years, including six Olympic Games, but I have never had a higher honor than to serve as an analyst for the Army-Navy dual meet this December,” said Gaines. “To be in an arena with so many amazing athletes and, more importantly, heroes is humbling to say the least.”

A native of Florida, Gaines attended Auburn where he totaled eight NCAA event titles and 22 All-America certificates. After initially qualifying for the boycotted 1980 U.S. Olympic Team, Gaines qualified for the 1984 Games in Los Angeles. He would set an Olympic record in winning the 100 freestyle final and earn two more Gold Medals as a member of victorious 400 freestyle and 400 medley relay teams.

The 1981 World Swimmer of the Year is a member of both the U.S. Olympic Hall of Fame and the International Swimming Hall of Fame.

Gaines has served as the swimming analyst as part of NBC’s Olympic broadcasts since the 1992 Games.

“It is both an honor and a thrill to have Rowdy attend and call the meet,” said Navy men’s swimming head coach Bill Roberts. “He is one of the great ambassadors for competitive swimming and diving as well as aquatics as a whole. We look at this meet as a real showcase for not only the swimmers and divers competing for both teams, but for the sport as a whole. His being here only elevates the stature of the signature meet on our schedule.”

“Rowdy is a legend in the swimming world,” said Navy women’s swimming head coach John Morrison, “and to have him on hand to announce one of the premiere sports rivalries in the country is awesome. There is always heightened energy and emotion at any Army-Navy competition. Now you add to that Rowdy’s enthusiasm for aquatic sports and just the excitement of the competition of both teams and this will be a meet for the record books. There is no doubt his voice will make it a terrific experience for fans of Army West Point, Navy and the sport of swimming and diving who will be watching around the world.”

Longtime Navy announcer Pete Medhurst will partner alongside Gaines on the video stream.

“As excited as I am to work with Rowdy as a broadcaster with having seen and admired his work on the world stage, I’m even happier for the student-athletes who will have one of the greatest of all time in the pool talk about the work they are doing,” said Medhurst. “This is a great opportunity for us at Navy to have someone of his renown be part of the broadcast.”

I predict Army will breath to the left and not see Navy pass them.

I assume this article is like a honey trap: give Swim Swam commentators the chance to just get it all out of the system now so they don’t spend summer 2016 in apoplexy.