Going To Glasgow: Russians In Line For Potential Sweep of Men’s Butterfly 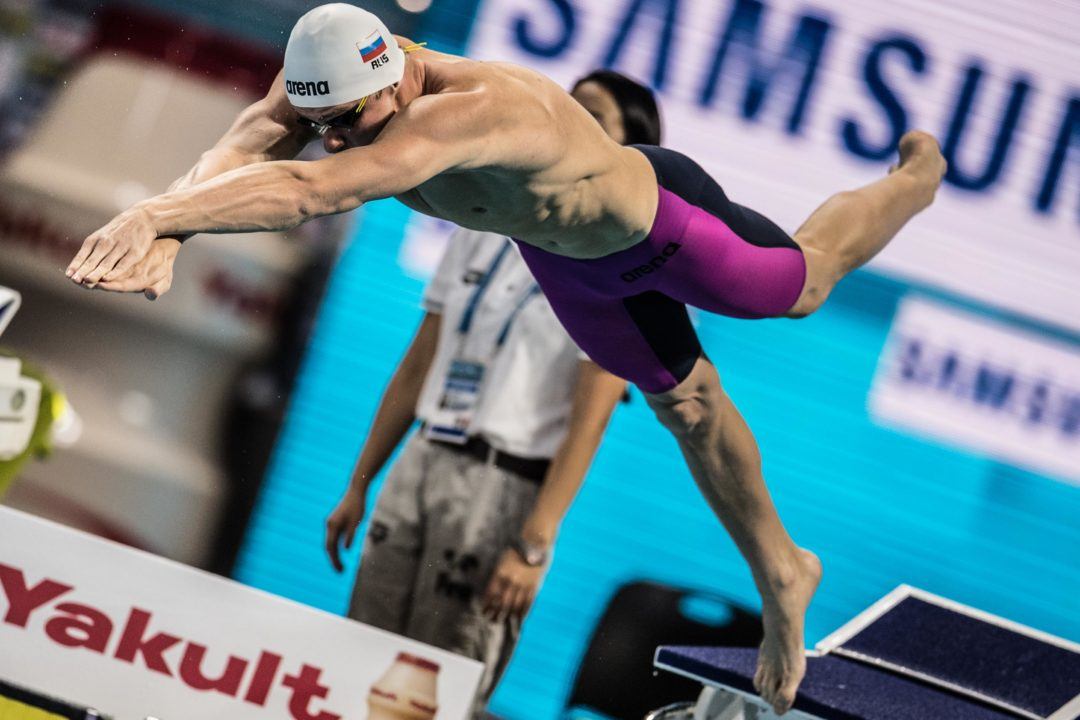 A loaded field in the men’s 50 fly is headlined by Hungarian Szebasztian Szabo, who went on a tear in the ISL with wins in Lewisville, Budapest and London. The 2017 bronze medalist hit his fastest time of the season at the Euro derby in a blazing 22.13, but that only ranks him second among Europeans this year.

Leading the way is Russian Oleg Kostin, who blasted swims of 22.07 and 22.12 at their National Championships in early November. Those performances marked a half-second best time, and after breaking 23 seconds for the first time in long course earlier in the year, culminating in a silver medal at the World Championships, he’ll be tough to beat.

Kostin’s countryman Aleksandr Popkov, the defending champion, comes in with the third seed with his 22.31 from Nationals. That’s just 0.04 off of his winning time from 2017.

With a whopping 12 others entered sub-23, the one who sticks out who could jump up into the medals is Frenchman Florent Manaudou. Manaudou was the 2015 Long Course World Champion in the event, and with his powerful start and underwaters, is one of the world’s best in the short course pool. He’s been as fast as 22.09 from back in 2014 and was 22.64 at ISL London. The only thing that could potentially keep him out of the top three would be if he’s using this meet as a tune-up for the ISL finals, which could very well be the case. Szabo, Kostin and Popkov, on the other hand, will be all in.

Other threats to make an impact in the final include German Marius Kusch and Belarusian Yauhen Tsurkin, who have both been 22-high this year and 22-mid last year. Another Russian, Daniil Markov, will have his work cut out to advance out of the heats as he’ll have to beat either Kostin or Popkov (only two per country can qualify into the semis), but if he does he’ll be in the mix as well.

The men’s 100 fly is similar to the 50 in that there are 15 men bunched up together in the psych sheets entered under 51. Only one, Kusch, is sub-50, with his 49.35 from the World Championships in December. If he’s able to hit his taper perfectly shortly off of the ISL season he’ll be favored to win, but there are several others nipping at his heels.

Kusch has been 50.21 this year, while Russians Kostin (50.05) and Mikhail Vekovishchev (50.15) have been slightly faster. They’ll be challenged by 200 specialist Aleksandr Kharlanov for the two Russian spots in the semis.

Like Kostin, Szabo is certainly more of a 50 fly specialist, but his 50.40 from the Lewisville ISL stop makes him a guy to watch for. Italians Matteo Rivolta and Piero Codia won gold and silver respectively two years ago in Copenhagen, both hitting 49.9, so they could easily be billed as the co-favorites coming in as well. Codia is also the reigning European LC champ in this event.

It’s going to come down to who can get themselves under 50 seconds. Kusch, Rivolta and Codia are the only three who have done that in their career, and Kostin is right there.

Despite struggling to make a significant impact on the long course scene, Russia’s Kharlanov has been among the top short course 200 flyers over the last few years, winning the 2017 Euro title in addition to back-to-back fourth-place finishes at Worlds.

His countryman Alexander Kudashev, on the other hand, fired off a personal best 1:51.20 at those Nationals in Kazan, putting him in the driver seat coming in. The third Russian entry, Aleksandr Pribytok, has been 1:52 this year and last, so Kharlanov will need to be sharp in the prelims to advance.

Also looking to make an impact here will be German Ramon Klenz, who cracked 1:52 in November, Bulgarian Antani Ivanov who was 1:51.8 at last year’s Worlds, and ISL competitors James Guy and Andreas Vazaios. Vazaios is the more dangerous of the two, seeing as he doesn’t have the ISL finals to worry about in a few weeks. He’s been 1:52.5 this season.