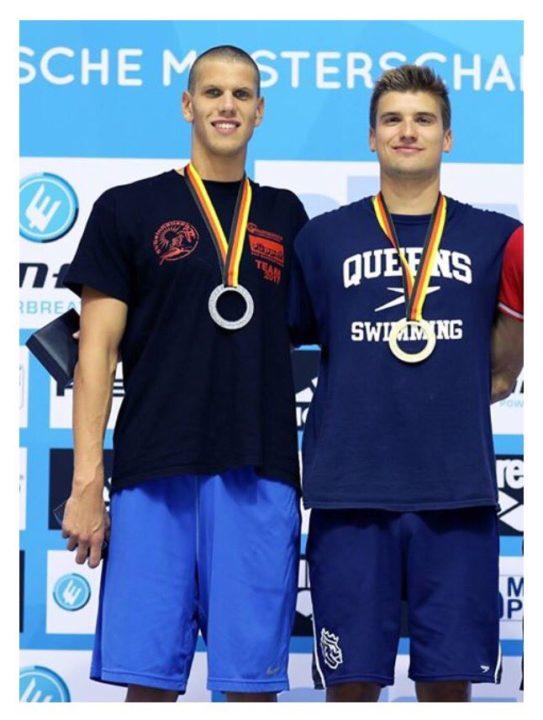 Alexander Kunert, a 6’5” butterflyer and freestyler from Berlin, Germany, has made a verbal commitment to attend and swim for Queens University of Charlotte next fall. Current photo via Alexander Kunert (Twitter)

Alexander Kunert, a 6’5” butterflyer and freestyler from Berlin, Germany, has made a verbal commitment to attend and swim for Queens University of Charlotte next fall. He will join French national breaststroke champion Jean Dencausse in the class of 2022.

“Next year, Marius Kusch and I will be training partners & fellow students at the Queens University of Charlotte, North Carolina, USA. And, Marius, congratulations to the bronze medal at the European Championships in Copenhagen in the 100 m butterfly !!!

In August 2018,  I will change to the USA. I’m really looking forward to the sporting challenge, to the special team spirit and to advancing my professional perspective. Of course, I will stay loyal to my German club, SV Gelnhausen, to which I owe so much, especially to my coaches who have brought and promoted me from the 5th team to the 1st team; here in particular Heike Heeger. Also sincere thanks also to the HSV, who has always supported me a lot and still supports me!

Kunert swam at 2017 German Short Course Nationals last week, earning a silver medal in the 200 fly with a PB of 1:54.39. He won the LCM 200 fly at the 2015 German National Championships. Kunert has represented Germany internationally for years. The youngest semifinalist in the men’s 200 fly at the 2015 World Championships in Kazan, he finished 14th with 1:57.29. He was the bronze medalist in the 200 fly at 2014 European Junior Championships. While he was disappointed to miss being named to the German squad for 2016 Olympic Games in Rio, he feels that it wasn’t the end and not what he wanted to achieve. A participation at Olympic Games is his biggest dream since he was a child.

Kunert and Kusch will be a formidable pair at Queens. Kunert would have joined his countryman in the A finals of the 100 fly and 200 fly at 2017 NCAA Division II Championships. The conversion time of his SCM 200 free would also have scored in the A final, as would his converted LCM 100 free.

And the rich get richer!

Talk about restocking the sprint group for next season. I saw Queens swim in mid November and they had two relays go 2:56. Yes, I said TWO relays go 2:56. They also had 4 guys under :20 in the 200 free relay. I’m pretty sure there are not to many teams in D2 that have that depth in the sprints as Queens. This team is going to tough to beat this year at NCAA’s.