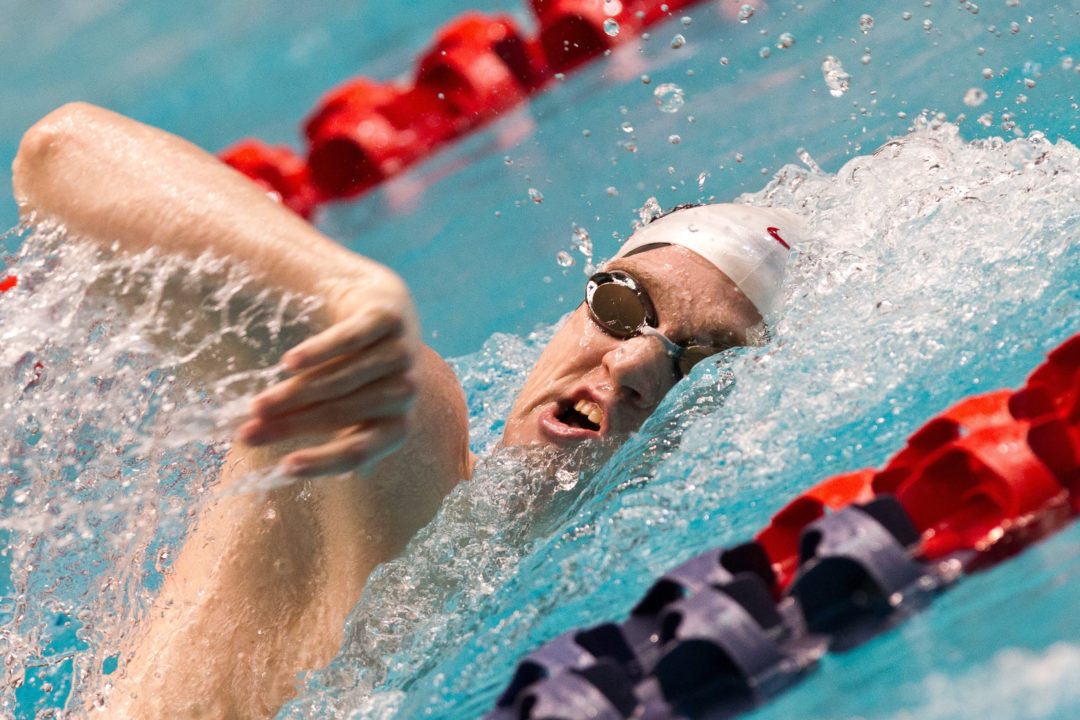 Andrew Gemmell powered around the final bouy to pull away for the win at the 2012 US Open Water National Championship 10km race. (Photo Courtesy: Tim Binning, TheSwimPictures.com)

Youth almost reigned in the men’s 10k, as compared to the women’s race that was relatively veteran, but Georgia’s Andrew Gemmell (who is almost a veteran at only 20) powered around the final bouy to pull away for the win at the 2012 US Open Water National Championship 10km race in a winning time of 1:58:03.8.

Germantown Academy’s Arthur Frayler, headed to Florida next year, swam like a veteran in this race. He saved his legs for much of the race, and holding the lead for much of the race even rolled over on his back a few times in the race to check out his competition without giving up any ground. But he made one vital mistake coming around the final bouy about 400 meters from the finish. He hit the bouy, which broke his momentum and seemingly his focus, just as Gemmell went crazy on the field.

The Mission Viejo Nadadores men used the same famous kick as we saw from the women, but they used it much later in the race. With about 150 meters to go, Janardan Burns looked as though he was diving in for the first 150 meters of the day and powered to a clear 2nd-place finish in 15:18:12.4 9 seconds back. That’s a huge margin considering how close to the finish Gemmell started his sprint.

The best battle at the finish was between David Heron, another swimmer from Mission Viejo, and Joey Pedroza, a swimmer with the other Nadadores (out of the Davie version in Florida) were stroke for stroke into the finish, demonstrating the true excitement of an open water finish. Without breaking stroke the pair swung upward to touch the elevated finishing pad, but it was Heron who slapped the pad first for 3rd at 15:18:15.8. Pedroza took 4th in 15:18:16.0.

Frayler ended up fading well back for 5th in 1:58:19.6, as did the newcomer Jordan Wilimovsky, an 18-year old from Team Santa Monica. Wilimovsky was only 50th in this race at last year’s event, but did well to hang right with Gemmell and Frayler for the majority of this race, but with about a kilometer to go just ran out of steam. He’s a big-time name to watch, and finished 9th in 1:58:45.2.

Alex Meyer, the American already qualified as an Olympian, hung back in this race. This is his first serious race back from breaking a collar bone, and with his Olympic spot already sealed up, he didn’t take much of a chance with injury. He was 10th in 1:58:47.3; by way of his Olympic qualification he automatically gets onto the National Team in the event. By comparison, he swam a 1:54 at World’s.

Other notable finishes include Bryan Dragonowsky, who is Frayler’s high school teammate at Germantown, in 7th at 1:58:31.6; Florida’s Connor Signoring in 2:00:25.8 for 13th, and Florida freshman Nicholas Caldwell in 15th in 2:02:08.8. Caldwell had a great first half to the race, but he’s still working his way back to full condition after an injury last year.

This was a very fast race as compared to last year’s Nationals, with the leaders coming in about 7 minutes faster than they did in the surf of the Atlantic Ocean. We should see an even faster race in London at the Olympics, where the  conditions will be similarly calm to these, plus a few degrees cooler in water temperature.

does anyone think the ‘right thing’ to do for alex meyer would be to let someone else represent usa at the olympics if he isn’t in peak shape?

Nope….he earned his spot and its a long way before the Olympics. Also he came back real strong after breaking his back starting his senior season when he swam a personal best in the 1650 at NCAAs.

For him to go from hardly swimming to 10th at nationals in just a few weeks shows how quickly he can get back in shape, or just how impressive his aerobic base is. Meyer is still a medal contender in London.

Alex will be fine, and he has more Open Water experience on the international level than anyone. He is in heavy training, and he is the best chance for the Americans to medal four months from now.

I have complete confidence that Alex will be good to go when the time comes.