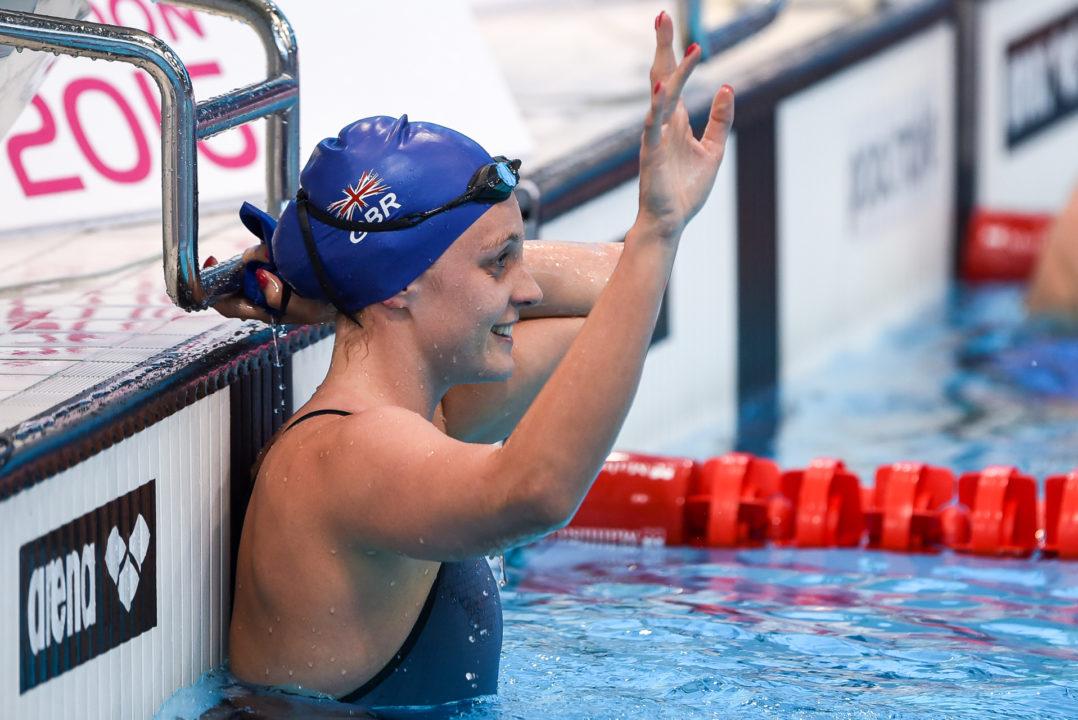 Fran Halsall's 4th place finish in the women's 50m freestyle was just one of 7 endured by the British swimming squad in Rio. Archive photo via Peter Sukenik/www.petersukenik.com

While competing at the 2016 Olympic Games, the British Olympic swimming team had its best outing in 108 years. The squad claimed a total of 6 medals in Rio, including an individual gold by 100m breaststroke world record holder Adam Peaty.

Also noteworthy was how the British squad scored a total of seven 4th place finishes over the 8-day competition, a fact which may point to the talent brewing in GBR, just waiting to pounce in Tokyo. Or, according to British Head Coach Bill Furniss, the 4th place phenomena may be by-product of the sport needing a tougher stance on doping.

Several of the aforementioned athletes competed in events in which a swimmer previously punished for doping finished in a higher position in Rio. For instance, James Guy placed 4th in the 200m freestyle, an event in which Chinese swimmer Sun Yang earned gold. Sun Yang served a short ban in 2013 for testing positive for doping.

Fran Halsall finished 4th in the women’s 50m freestyle, a race whose bronze medal was won by Belarus’ Aliaksandra Herasimenia who served a 2-year ban back in 2003.

Says Furniss of the aforementioned scenarios, “It sticks in my throat that we have had seven fourths and in at least three of those finals an individual [has previously] failed a drug test. I didn’t say anything about it in the build-up because it was a distraction but I think we have been penalised more than any other nation here.” (The Guardian)

“Look at the races and look at the statistics. You know it’s out there, it’s in the public domain. I’m not going to mention names. But as a nation, we fell foul of it. It’s hard to take. My message to the people who govern our sport is that we want a clean sport. My message is that I have got certain individuals to whom I have got to explain [this]. They have done everything right and are not being looked after. Everything seems to be focused around how fair we can be to people who have not passed drugs tests. It is just not right. It sticks in my throat,” Furniss continued. (The Guardian)

“I think if you fail a drugs test you should not be at the Olympic Games. I can’t say it any more clear than that. It’s hard to take; it’s shambolic.”

Have to make the price/risk too high to dope or its all a farce. IMO the IOC had the opportunity to do it this year and minimize future systematic doping programs…and they caved to political pressure.

Are alcohol and cannabis of the list????? Use of doping?

Can of Beans – yes, both are banned in certain circumstances.

He is ABSOLUTELY correct, and it wouldn’t surprise me a bit if years later the samples are re-tested and British swimmers are awarded medals they were denied by dopers.

Or the British swimmers get popped themselves.

Because there has been such a large history of doping in British swimming. Or wait, did I get the country wrong there?

Not to mention the swimmers that lost their chance for the finals by placing ninth. Nothing seems to surprise me anymore after the whole Efimova thing.

Or Marianne Limpert, Canadian silver medalist behind drug cheat Michelle Smith of Ireland in the 200IM. I always thought this was a stinging injustice.

Join the line, both the brittish cycling program cira 2012 and Mo(linked to three coaches that have been done for drugs programs) are all under the spotlight and the althletes that finished after could say the same thing. G.B and the world has a drug problem. Some of these swimmers stepped up to 4th and other swimmers that were rated higher coming in fell by the wayside- even denided finals by this logic.
Gotta get the testing proceedure more consistant in all countries, away from government hands and lower the number of positive tests needed to suspend a country.
I would bet that Peaty is clean as a whistle (for no real evidence than gut feeling), but to… Read more »

I don’t think that will happen although it should. But look at Shirley Babashoff, the greates victim of drug cheating in the history of the sport, still awaiting her gold medals since 1976! Depressing!!!!

BTW, I am currently reading Shirley Babashoff ‘s book Making Waves! It should be read by all swimmers now as it relates her struggles and frustrations with this doping plague! A must read!