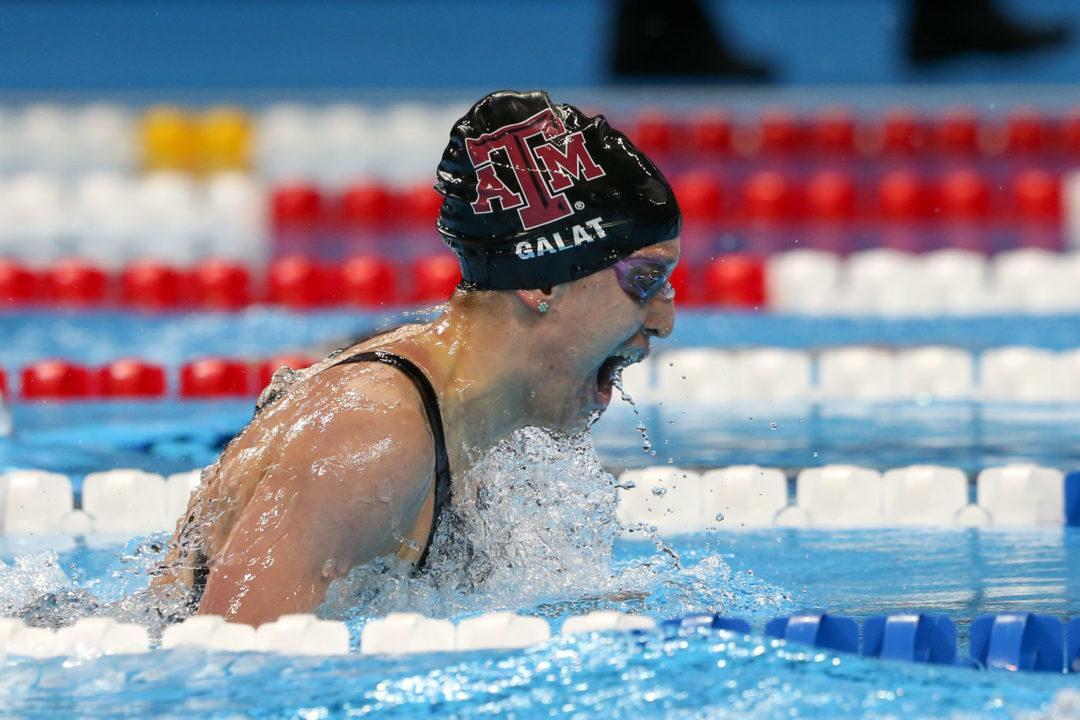 The Notre Dame Fighting Irish played host to Texas A&M and Michigan State on Friday, with teams being scored in the standard head-to-head dual meet format. The Aggies will complete their battle with Notre Dame tomorrow on day 2, while the Spartans were only slated to compete on day 1.

It was a dominant display by the Texas A&M women, winning eight of nine day 1 events including both relays. World Championship silver medalist Bethany Galat shone brightest for them, winning a pair of individual events in the 200 IM (1:59.00) and 200 fly (1:57.67). Her teammate Lisa Bratton was also particularly impressive, adding a runner-up finish to Galat in the 200 IM to a pair of first place finishes in the 200 back (1:55.13) and the 400 medley relay.

Joining her on that relay were Jorie Caneta and Beryl Gastaldello, who each had a win themselves in the 100 breast (1:00.81) and 100 free (48.68) respectively. Kaja Skrzek added a win for the Aggies in the 3-meter diving event, while Gastaldello also led the team to a win in the 200 free relay. Kristin Malone also had a strong day 1 showing, appearing on both the winning relays.

The men’s meet had a similar story to the women’s, with Texas A&M executing well with seven of nine event wins.

Notre Dame got off to a hot start, claiming two of the first three events before Texas A&M rattled off six straight.

Nick Leshok was the top finisher for MSU, placing 6th in the 100 breast.

Note: All scores are per team releases. Official scores cannot be confirmed as the official results and Meet Mobile have only scored relays thus far.

She’s healing from a groin issue right now. She’ll be back soon and swimming faster than ever.

A&M women are incredibly deep this year. Seniors look locked in, some very nice swims from newcomers as well with Belousova, Pike ,Yelle, Field and a diving win from Skrzek. And It looks like Jing Wen Quah is going to transition quite nicely to yards after posting a 1:58.5 2 fly and relay splits of 53.3 fly and 22.9 free.

A&M men are on the rise. Sleeping giant no longer, major talent improvements, strong seniors (Castillo, Bonetti, Tybur) ]and tons of diving to boot. Good things on the horizon in Aggieland.

ND is also a team on the move. Very fun meet all around.

I agree! Two teams with good economy that might be solid Top-10 in a couple of years.