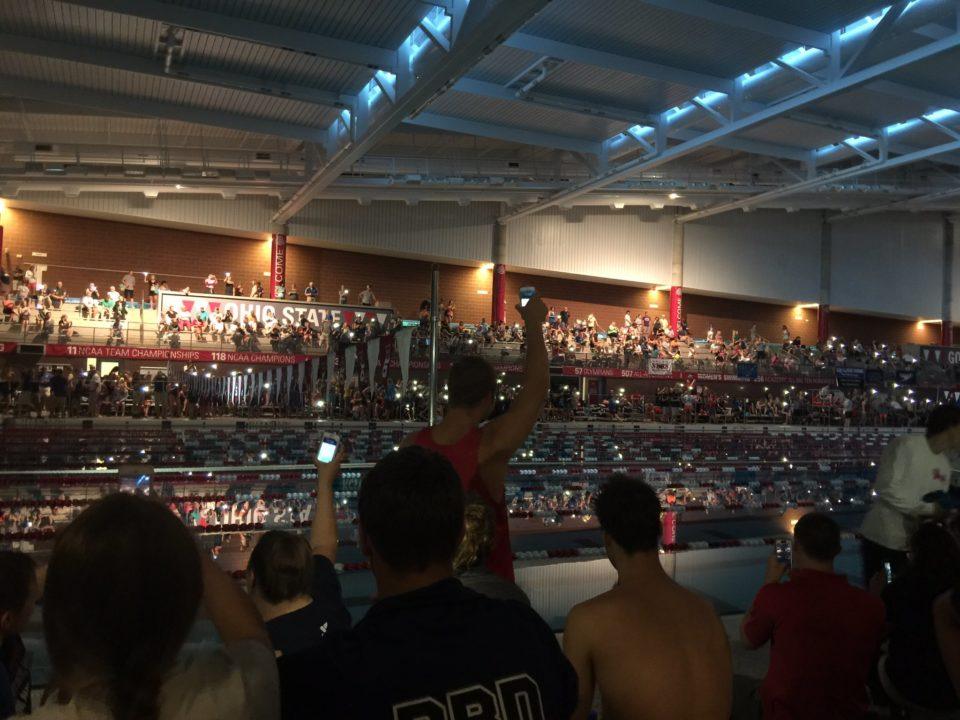 Friday Nights’ evening session at the 2016 Columbus Sectional Championships meet at the McCorkle Aquatic Pavilion on the campus of Ohio... Archive photo via Brian Peresie

Friday Nights’ evening session at the 2016 Columbus Sectional Championships meet at the McCorkle Aquatic Pavilion on the campus of Ohio State University have been cancelled.

The meet, which is a summer-ending championship meet for many swimmers moving to make a leap to Futures or Junior Nationals time standards, is hoping to wrap up on Saturday. Several buildings on the Ohio State campus lost power. The meet was initially delayed, but eventually put off until Saturday – where Friday’s events will be swum in the morning as timed finals, and Saturday’s events will be swum as timed finals in the evening.

As booming thunderstorms moved through Ohio this morning, the facility lost power in the middle of the prelims sessions. Prelims were then originally scheduled to be delayed

Several tweeted pictures during prelims of the full McCorkle facility with the power off.

When the power goes out at the Columbus Sectionals @swimswamnews pic.twitter.com/DU8NnejXer

Very unfortunate to all these kids competing at their taper meet. Some will have to swim up to 6 swims in a single session on Saturday.

And on top of that the swimmers don’t get any second swims, including the swimmers that finished their races on Friday morning and earned their spot in the finals.

and so much complaining…………

As a swimmer there, it’s a bad situation. We have to swim all of the remaining events in one single 12 hour long session starting at 7:45 AM tomorrow and ending at nearly 8 PM. All timed finals. Not very good organization on the meet’s part.

Stop bashing the organization of the meet host. It’s a crappy situation yes, but this is small potatoes compared to challenges you will face when you become an adult. You need to learn to roll with the punches and deal with adversity.

What is your problem? All I said is that it is a very less than ideal situation, and in my opinion the remaining events could have been organized in a way that is less detrimental to the swimmers that tapered for this championship meet. I am an adult by the way. There’s no need to go on with the fallacy that one’s troubles mean nothing because there’s something harder to deal with.

The meet organizers can’t control the weather, where lightening strikes. They have done everything possible to get in as many swims as possible. Extending the meet an extra day would be burdensome to the majority of swimmers who came to Columbus from out of town — think hotels, meals, logistics.

This meet has been flawlessly run. Even dealing with a six hour power outage was handled the best way possible. Everyone was informed as specifics were learned, information was passed on quickly and the rough a variety of sources to swimmers, coaches and spectators.

Bravo USA Swimming, Speedo Sectional organizers, officials and the Ohio State pool. You made lemonaide out of lemons.

This is, by the way, the solution agreed upon by all of the coaches and officials.

AKMI20, it is less than an ideal situation and frustrating both to swimmers and meet organizers. If you had simply expressed that frustration, you would have received sympathy. Instead, you bashed the meet organizers by saying,”Not very good organization on the meet’s part”. The meet organizers put a lot of work into planning this meet. When the electricity went out, they quickly scrambled to implement the plan outlined by the meet committee of coaches, officials, and swimmers. They reseeded events, put together heat sheets, and put the call out to the host team parents and swimmers to fill volunteer positions. The majority of those volunteers do not have a family member swimming in this meet. They take time from their… Read more »

I agree. Dont blame the organization. There is much to consider, safety being one. Be grateful for the opportunity to swim at all tomorrow.

I guess you can’t please everyone.
Yes it’s not a great situation but the meet host did a great job with the situation they were dealt. They cannot control how long the power was out and how long the fix would take. This is rare occasion at a facility of this nature. You need stop blaming the meet host for figuring out a way to still allow the swimmers to compete, because I am sure you would be the same person criticizing them if they cancelled the rest of the meet.

Why don’t you talk to your coach about your events, toughen up emotionally, and learn how to overcome adversity.

What would you suggest as a better alternative? Do you understand the logistics of putting on a meet like this on a major university campus? The meet organizers are doing a great job trying handling an unfortunate, unavoidable situation. We should set an example for the kids in dealing with adversity. My kid is disappointed also. Help them learn a lesson and try to put up some fast times tomorrow.

Host these meets in outdoor pools. Wouldn’t be much of a problem.

Except for the mandatory 30 minute delay every time there is a lightening strike. July… Central Ohio…. Yep, there are thunder storms.

Yeah except then when the major thunderstorms move through the meet would be…. postponed or cancelled.

In my neck of the woods, all of the meets are at outdoor pools. And there ARE times when almost an entire session has been cancelled because of lightning. AND because of the time line of the rest of the meet, there sometimes isn’t enough time to make up all of those swims.

You really can’t control the weather. Having the meet mentioned in the article above conducted outside probably would have made the weather delays even worse.

No, I will blame the organizers. I think you can justify telling Friday morning swimmers who still haven’t competed, “Hey, you are going to swim a timed final tomorrow and we’ll reseed. You only get one swim.” Seriously, that’s fine because the swimmers know what’s happening. They know they have to give it their all and the heats have been reseeded to put all the best swimmers in a competitive timed final. However, you cannot justify telling swimmers who had already swam in circle-seeded heats, “Um, yeah, well, sorry, that’s it. I know you only missed your JNAT cut by .10, but that’s it. Congrats, you took third. Here’s your medal.” At the very least, they should let the A… Read more »

I get the missed opportunity to make Juniors. I feel for you if your kid is 18 and won’t be eligible for future meets. But there’s perspective in thus that I hope you can give your kid. Your kid’s life is much more than swimming and I sincerely hope that making a junior national cut is the highlight of his or her life. In the same regard, I sincerely hope that missing this cut is not the end all be all of his or her life or swimming career.

We are at this meet and I think the committee did the best they could under the circumstances. I have two swimmers, one trying to get futures sorbet an NCSA cut. Things happen that are not under our control. Yes it will be along day, but swimmers train and swim under many conditions and this happens to be one of them. This is nothing compared to the Michigan 13 and over SC meet at EMU when they canceled the finals. My kids went home due to the reaction they got from the poor ventilation. I will take this over EMU

i am sorry you kids had a reaction…..but nothing was canceled at the MI state meet at EMU in March 2016. You are mistaken. And i feel for the meet committee in Columbus having been on that side of it at the EMU meet.

I believe they are still holding time trials too. So perhaps kids close to the cuts can try again there.

Actually as a swimmer I thought that this was the best route that they could take to resolve the problem. Obviously you haven’t been in the shoes as the swimmer, and I give the OSSC a big thank you for keeping the meet run smoothly.