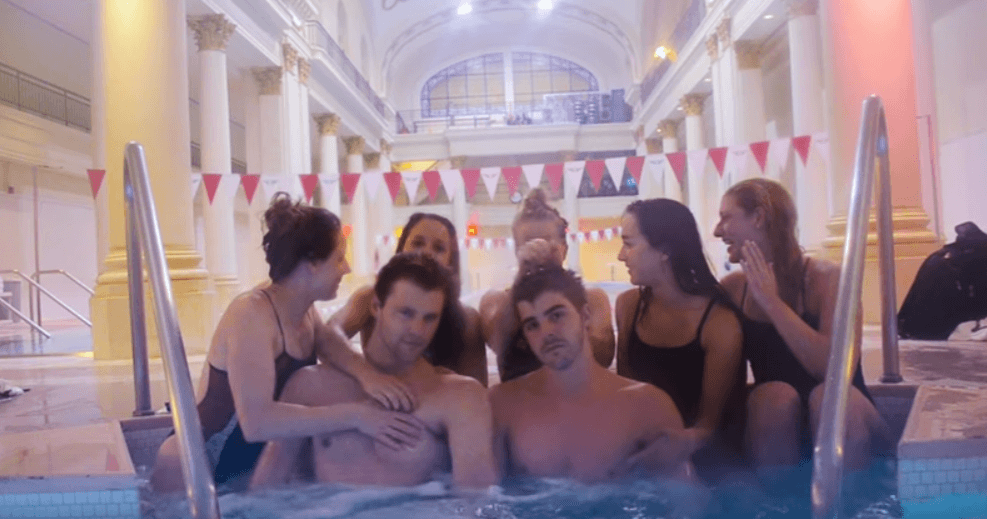 Recent Olympic Trials swimmers Colin Babcock and Kevin Ferguson made the most of their time in between prelims and finals, producing this hilarious rap video dubbed "The Speedo Rap." Current photo via courtesy of @colinbabcock & @kevinblakeferg

When swimmers Colin Babcock and Kevin Ferguson noticed a general lack of original and fun videos specifically hyping up swimming leading up to the 2016 Olympic Games in Rio, the creative duo decided to do something about it. The result? A hilarious and highly entertaining rap video creation dedicated to that #swimlife entitled “The Speedo Rap.”

Babcock, who was a breaststroker and IMer for Notre Dame, and Ferguson, who specialized in sprint freestyle at UC Santa Barbara, recently ‘pooled’ their talent together in their hotel room between prelims and finals of the U.S. Olympic Trials in Omaha. The duo’s take on a swimtastic rap video is complete with an A-level celebrity in the swimming community via a cameo by none other than “The Anchor” himself, Jason Lezak.

With lyrics such as “Dancing on that podium, causing pandemonium” and “You’re rising to the top like you was polyurethane” you know the swim-centric content is on point.

Says Babcock of his and Ferguson’s concept and production:

In 2014 I made a swimming video called “The Swimmer’s Mentality” that was kind of my swan song to the sport. After getting overwhelming positive support and feedback from the swimming community, I decided I wanted to continue producing videos and creating new and unique content. For the past year, I have been working full time during the day and learning about filmmaking and the creative process at night. Most of my projects have been very introspective and gritty, so I wanted to take a break and have some fun and do another swimming video. A few weeks before Olympic Trials, I had this random idea to create a rap song and video for Speedo that pretty much just promotes their brand right before the Olympics. I told this idea to my friend and teammate Kevin, who was immediately on board. We wrote the lyrics and recorded the rap in our hotel room in between prelims and finals at Trials in Omaha and we took a weekend and filmed all the footage at The Olympic Club in San Francisco, where we train. After a quick turnaround with editing, we have our final product and hope you all enjoy it!